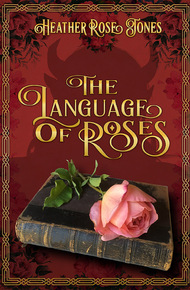 The Language of Roses by Heather Rose Jones

A Beauty. A Beast. A Curse. This is not the story you know.

Join author Heather Rose Jones on a new and magical journey into the heart of a familiar fairytale. Meet Alys, eldest daughter of a merchant, a merchant who foolishly plucks a rose from a briar as he flees from the home of a terrifying fay Beast and his seemingly icy sister. Now Alys must pay the price to save his life and allow the Beast, the once handsome Philippe, to pay court to her.

But Alys has never fallen in love with anyone; how can she love a Beast? The fairy Peronelle, waiting in the woods to see the culmination of her curse, is sure that she will fail. Yet, if she does, Philippe's sister Grace and her beloved Eglantine, trapped in an enchanted briar in the garden, will pay a terrible price. Unless Alys can find another way…

A retelling of Beauty and the Beast that reaches into the heart of the original and pulls out the unexpected. At a time when we are looking for queer interpretations of traditional stories, Heather finds a unique path to create a new story out of an old one. – Catherine Lundoff and Melissa Scott

Grace du Fortigny picked her way along the graveled path that led toward the small wrought-iron gate at the back of the barren garden. With an effort that she felt but dared not calculate, she commanded the invisible ones to trail behind her, sweeping the path free of leaves in her wake and dusting across her footprints, erasing the traces of her visit. It left an ache in her bones—an ache like the weight of the curse that hung over the manor of Bettencourt.

Her limbs felt less heavy, less stiff in the morning, and dawn was the only safe time to walk in that corner of the courtyard. There was little chance that Philippe would be watching. Even so, caution led her along a roundabout path, past the bare traces where the hedge maze had once stood and the empty beds that had been a kitchen garden thirty years ago. Past the dry, silent fountain.

She could have asked the invisible ones to tend the gardens. Something might flourish despite the shroud of mist that hid the manor from mortal eyes, but what was the use of that? Philippe provided food for the table with an effortless gesture. Why should she spend her hoarded strength simply for some small bit of sustenance that didn't rely on his pleasure?

She came to the briar that grew beside the gate as if her steps had taken her there by chance. Or as if her only task there was to direct the invisible ones to grease the hinges of the gate. She had neglected that once, long ago. Now it was a habit, out of penance, like the habit of caution in her steps. The rose twisted up from gnarled roots, stretching thorny branches out toward the gaps between the iron bars. Here and there on the brambles, leaves trembled in the breeze seeking the hidden sun. A tiny cluster of buds swelled at the tip of one branch.

Grace reached out to cup stiff fingers around that promise and breathed a kiss of warm air across it. She looked anxiously over her shoulder at the upper windows of the manor. They still showed shuttered against the light. Philippe didn't care for light in the morning even if he woke this early. She turned back to the briar. She had no skill to work with matter. That was Philippe's domain: the transformations, forcing one thing to another. She had only the invisible ones. But here was no need for transformation. The bloom would come on its own.

"What is it?" she asked the rose softly. "What message wakes you?"

The buds swelled between her hands, cracking the petals apart. At first there was a cluster of small white blooms, seeded with red at the center. A tremor fluttered through her heart. Hopeful news. A hint of one last chance. She had never entirely lost hope, but it was furled tightly within, like the petals in a swelling bud. Like a river that rushed and tumbled under a skin of ice. She had grown a hard skin long before Peronelle's curse had touched her. Eglantine had coaxed her to dare to bloom that summer, but it was followed by thirty long years back in a habit of stone. Stone kept that bud of hope safe from Philippe's suspicions—not hope for herself, but for what she held most dear.

Grace breathed across the central bud once more and it unfurled, scattering the petals of the smaller blooms across the ground. The flower struggled to open halfway, then just enough more to show the colors within. A broad white simple rose, streaked with purple at its heart. There was no mistaking the sign. "It has been long and long since you sent that message," she said.