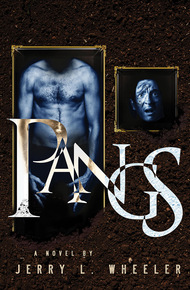 Unlike their Blood Brethren, Warner and Seth are vampires who subsist on talent. They have been enemies for centuries, competing to feed on artists with the most prodigious musical gifts, and country blues singer Wade Dixon is no exception. But the pursuit and capture of Dixon unleashes unexpected forces that carry these combatants from the earthly realm to a dangerous land of eternal night where they must work together or die alone.

I knew from the moment I sensed the prey Seth and I would end up fighting over it. We always did. We were the oldest and the strongest of our kind left, except for the Old Man. But he hadn't walked in centuries. We couldn't even feel him any more. But I felt Seth's desperation. Neither of us had fed in a long time.

Unlike the blood brethren, our needs are different and cannot be fulfilled by just anyone walking the street. Our prey is rare, which is why we must compete to feed. Only the strongest and smartest survive, and Seth is a formidable opponent, especially when desperate.

I knew he was already in New Orleans before I stepped off the plane, but I was in no hurry. I caught a cab to the bed and breakfast where I always stay in the Marigny, dropping my bags in my room and heading out into the courtyard. I sat down and closed my eyes, letting the hot afternoon sun steam the grimy travel stench of the airport out of me until sweat rolled off my brow and soaked my back. When sufficiently acclimated, I napped, showered, changed, and headed into the Quarter as the twilight dawned.

New Orleans is one of those places, along with Memphis, London, and New York City, where I can always find a snack to tide me over until someone worth feeding from comes along. The quality we seek is in abundance here, but I could never move back to the Quarter—too many memories, too many close calls, too many who still bear grudges. I might be able to alter my appearance a bit and change my name, but my presence is far too well-known for more than a brief visit. I don't fear competition, but I embrace anonymity.

On Friday and Saturday nights, the tourists on Bourbon Street are layered as thick as powdered sugar on a beignet, weaving sloppy, drunken patterns in their cargo shorts and flip-flops. They take up space at the bar, laughing too loudly so as not to feel the ghosts of the city shuddering past them. I love those spirits. I've known many. But I follow my nose and my instincts rather than the tourists.

And they lead me to a small doorway off Royal and Tolouse. It's painted black and has no sign outside, but I know it's the Club Du Monde. And I know Seth will be inside, waiting for the object of our search. When I open the door, a cold blast of air conditioning shocks me. I sigh, remembering when the city was not chilled for tourism, and I remind myself that change is neither good nor bad. It is simply change.

A jazz quartet is on the small stage, the saxophone player riffing a sweet, slow twilight song as the bass and drums structure the beat and the guitarist drops in a Wes Montgomery run now and then. They are adequate appetizers. Nothing like what will be on stage later, but I'm not looking for hors d'oeuvres.

Others of our kind are here, but they know Seth and I have first claim on the real prize. They will settle for the quartet because they are used to those meals. Seth, of course, is sitting alone at the front table, but he is not wearing the unshaven, sallow, snaggle-toothed visage I'm used to seeing. He is the woman this time—what is her name? Laura? Laurene? No matter. He's probably changed it again.

His eyes, however, are the same deep green, and I know the scalp beneath that long blond hair still bears the scars of our last encounter. He is wearing a crisp, light blue strapless summer dress, showing off his ample cleavage. I have to smile. He thinks a female form will give him an advantage, but such artifice only expends energy. Besides, he obviously does not sense what I do about the quarry.

He drained his drink as I slid into the empty chair at the table. "Hello, Seth."

Munching an ice cube, he grinned. "Warner—how lovely to see you again. Please call me Laura."

"I'll try. I might forget. What are you drinking?"

"Amaretto on the rocks."

I signaled the waiter for another round as the band left the stage to a smattering of polite applause. "You look marvelous. All healed?"

"Ah, yes. That was a nasty blow. Did you enjoy our jazz man?"

"I did, indeed. I fed from him for five years until his gift dissipated. After that, I had no reason to hold on to him."

Seth clucked his tongue. "Even the most talented eventually run dry." He tossed his hair and smiled as the waiter brought our drinks. "However, five years is a long time. I imagine that has sustained you for…what, ten years or more?"

"Twelve. I don't waste energy on frivolities like useless shape-shifting."

"Useless? This shape will win the prize, I guarantee."

"If you say so," I replied with a shrug, "but take care not to overestimate the power of your breasts." I sipped the too-sweet drink and grimaced. "For argument's sake, since I already assume your answer, let's say you are the victor this time. Would you share the prize? Properly nurtured, his gift could last us both decades. We could be sustained for several lifetimes."

Seth shook his head. "Dear Warner. I appreciate the sentiment, but you know that's not my way."

"I suppose not," I said, sighing. "Your way is all death and destruction. Do you feel no remorse for the talent you've denied the world time and time again? Billie Holiday, Janis Joplin, Hank Williams, and so many others—you could have sipped slowly from them for years instead of sucking them dry and letting them kill themselves with drink or drugs trying to figure out how they lost such an essential part of their beings."

"Don't lecture me, Warner. It's tedious. You know perfectly well if I don't take them, someone else will try to. We don't all have your sense of fair play and cooperation, and I refuse to share my meals with others. That's why I feast quickly and leave them." He shifted and I saw his true face for a moment. "Nurturing your prey," he said with scorn. "I'm a vampire, not a wet nurse."