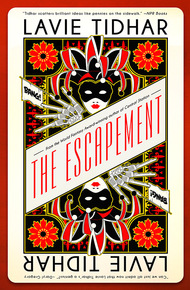 The Escapement by Lavie Tidhar

Into the Escapement rides the Stranger, a lone gunman on a quest to rescue his son in a strange parallel reality. But it is easy to lose one's way on an endlessly shifting, unpredictable landscape. Especially in a place full of dangerous mirror-images of a child's beloved things: lawless heroes, giants made of stone, downtrodden clowns, spectacular symbol storms, and an endless war between gods and shadowy beings.

As the Stranger has learned, the Escapement is a dreamscape of deep mysteries, unlikely allies, and unwinnable battles. Yet the flower the he seeks still lies beyond the Mountains of Darkness. Time is running out as the Stranger journeys deeper into the secret heart of an unimaginable world.

In his most compelling work to date, Lavie Tidhar has delivered a multicolored tapestry of dazzling imagery. The Escapement is an epic, wildly original chronicle of the extraordinary lengths to which one will go for love.

This is another one of my favourite books, a surrealist quest across a landscape populated by clowns, in which a desperate father searches for a mythical cure to save his son's life. It was only too late that I realised no one actually likes clowns. Which remains a mystery to me! But there you go. Ultimately, I think, it's a book with a heart – which is all that matters. – Lavie Tidhar