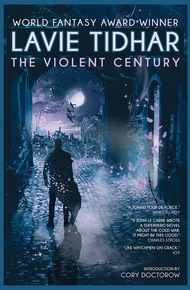 The Violent Century by Lavie Tidhar

A bold experiment has mutated a small fraction of humanity. Nations race to harness the gifted, putting them to increasingly dark ends. At the dawn of global war, flashy American superheroes square off against sinister Germans and dissolute Russians. Increasingly depraved scientists conduct despicable research in the name of victory

British agents Fogg and Oblivion, recalled to the Retirement Bureau, have kept a treacherous secret for over forty years. But all heroes must choose when to join the fray, and to whom their allegiance is owed—even for just one perfect summer's day.

From the World Fantasy and Campbell award-winning author of Central Station comes a sweeping novel of history, adventure, and what it means to be a hero.

I don't like superheroes, so it made sense to write a novel about them! There was a TV adaptation in the works for 2-3 years and then there wasn't, which is how these things go. I remember it was a difficult book to write – some books are just like that – but it was a fun world and I've been coming back to it from time to time. It's the sort of book people still quietly come to tell me that they like – which doesn't happen very often! – Lavie Tidhar

A gunshot in the fog.

A body floating, cold and white, in the water of the Havel River, a scrap of fabric clutched in a lifeless hand.

A woman hanging by the throat from the ceiling by her own bedsheets, her long black hair wet. We assemble the images slowly:

Tank's body strapped to a slab, electricity coursing through him.

A plane crashing into a skyscraper. Red poppies in a field, as far as the eye can see.

A frozen golem, erupting from the ice.

Who do we focus on? Shadows flee from our gaze. To observe something is to change it. Still:

A violent century. Where does it start? We sift through recollections, old footage, dusty manuscripts. Probabilities collapse. So much death, but wrapped around a love. We watch. So many shadows.

Where does it end?

The way it begins, perhaps:

The farmhouse stands on its own in a sea of green grass, white weathered stones like an ancient fort. Electricity had been installed some time back. Plumbing. A radio antenna on the roof. It is a shining bright day, the sunlight is blinding, a pure, yellow radiance emanating from deep blue skies.

Somewhere inside the farmhouse music plays, softly. A scratchy quality. A gramophone. A French chanson, each note hovering, for just a moment, in the air, before being replaced by the next.

Beyond the farmhouse lie mountains, outlined in chalky-blue in the distance. Insects hum in the grass. Summer. The smell of freshly harvested wheat from somewhere else, perhaps a nearby village, though we never see it. Smoke rises out of the farmhouse's chimney, white smoke against blue skies.

Idyllic. The word we look for, each time.

A girl stands in the field of grass, between the farmhouse and the skies. Her long hair is blonde. Her skin is white like clouds, her eyes are blue like sky. She wears a thin white shift, almost translucent in the sunlight. She is in motion, hands at her sides, trailing luminescent lines as she turns.

A butterfly hovers in mid-air, between the girl and the farmhouse. A Clouded Yellow. It hovers almost motionless, it seems. Compound eyes look over the meadow. Antennas flutter. The Clouded Yellow has a distinctive mark on its wings, a white eye and a scythe-like scattering of black dots on the wing edges.

Inside the farmhouse the music comes to a halt. The gramophone spins silently. The air . . .

The girl seems frozen in motion, her hands rise, as though to ward off something invisible. The farmhouse seems to shimmer, inexplicably, as though the level of agitation in its component molecules has been increased, all at once. A distortion emanates from the farmhouse. Silent, swift, it travels from the source and spreads in an outwardly expanding circle. The butterfly hovers, somehow changed. Were we to look closely we would see that its distinctive eye had turned from white to azure, the colour of a summer's skies. Time seems to slow, to freeze, then speed up again all at once. The girl completes her spin. Stops. Lowers her hands. The butterfly flies away. The girl looks at the farmhouse.

Beyond, the distortion spreads and disappears. The girl stares down at her bare feet.