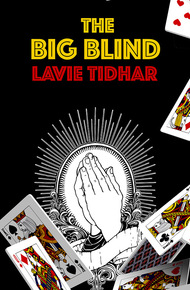 The Big Blind by Lavie Tidhar

"Tidhar changes genres with every outing, but his astounding talents guarantee something new and compelling no matter the story he tells." –Library Journal

The daughter of a legendary card player with skills of her own, Claire doesn't want to go into the family business. She's heard the call, and she desperately wants to become a nun. But when her convent comes under financial threat, Claire must leave what she loves to save what she loves–and enter an international poker tournament.

Both a poker novella and a meditation on faith, The Big Blind is a taut, heartfelt and compelling new book from multiple award winner Lavie Tidhar.

I've been fascinated by poker for years, ever since the hole cam was invented, and always wanted to try writing a poker story. But how? My joke pitch for this was that it's "Sister Act meets Rounders", but it just turned out to be a quiet, heartfelt story about faith, family and, yes, a nun entering a poker tournament to save her convent. Another one I really like! – Lavie Tidhar

It was quiet in the small poker room at the back of the Dales. The sound of chips, the snap of cards on the felt. Cigarette smoke in the air, and someone coughed, someone else said, 'One time, just one time,' softly at another table.

Claire pushed the chips in, with a sort of careless studied gesture. They toppled across into the pot. It was a large pot.

The player on her left said, 'All in,' and pushed the remainder of his chips in. Immediately. But she'd expected him to do that. He had a short stack.

The rest folded, one after the other, until it came to the Docker. He was a short man and now running to fat but there was muscle under there. They said he used to work the docks. They said he did time in an English prison. They said all kinds of things. He looked at her. She looked nowhere, trying not to give anything away.

You never played the cards, as the old saying went, you played the players.

He took his time, but that was all right. He had a big decision to make.

She wished he'd get it over with, though.

Someone else said, 'Only one way to find out.' Someone else laughed, but quietly. The Docker shrugged and folded.

She turned over her cards and the short stack did likewise. The river was a three of hearts and she didn't make the flush but her two pair still beat the short stack's. He got up to leave the table.

She shrugged. The dealer shuffled the cards and dealt and round the table they went again.

There were three of them left after another hour. Her and the Docker and some kid, kind of cocky, with black curls of hair. He flashed her a grin. Nice teeth, and he knew it. He bet. She called, wanting to see the turn.

When the turn came it didn't come her way but she had position and she used it, applying pressure, and the kid folded.

He smiled again. He had an easy smile.

Even the Docker smiled at that. The next round he raised pre-flop, she folded, and the kid called. She took a sip of mineral water, watching the play. A raise and a call on the flop. She couldn't read either of them.

On the turn the kid went all in. Quick call from the Docker. He turned his cards over. A full house. A look of disgust in the kid's eyes. Turned his own over. It was a lower full house.

River came. It was a deuce of spades, no good to anyone. The kid got up.

'Mikey.' The kid was looking her way again. Wore a new smile, like he had no care in the world. She thought maybe he didn't.

'Just in case you forgot. I'll be seeing you?'

'Why not, long as your money's good at the table.'

The kid laughed. Then he went over to the bar and got himself a beer.

A few rounds later the Docker went all in on a semi-bluff and she called with a three of a kind but he got lucky on the river and with that the game was over. She collected her second-place winnings from Peg, the cashier.

'How's your dad, Claire? He's not been round these parts for a while.'

'It was cancer. It was… It was pretty quick.'

'He was a character, was your dad.'

She took the money and turned to leave. Went past the kid, Mikey, necking a bottle of beer. Gave him a nod as she stepped out into the night, cold air, the smell of rain.

She pulled her coat around her and stepped into the drizzle.

She had to wait at the bus station for over an hour. She got a coffee and when she'd finished it she went into the bathrooms and changed into her habit.

The ride back was quiet. Her head rested against the window. It was another hour on the bus and dawn was just beginning to break on the horizon when they got to her stop. She got off.

There was no one around and the convent was quiet. She climbed over the wall and got in and went into the chapel and put the envelope with the money into the collection box and then she went up to her room. She lay on the bed, staring up at the ceiling, and fell asleep for an hour before waking up again for Vigils.