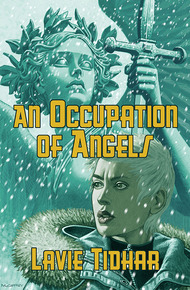 An Occupation of Angels by Lavie Tidhar

A British secret agent is caught in a plot to assassinate archangels who settled Earth after WWII in this classic thriller from the World Fantasy Award winning author!

In 1945, the Archangels materialised over the battlefields of Europe, ushering in a new Cold War. Fifty years later, they are being killed off… one by one.

Killarney is a shadow executive for the Bureau, British Intelligence's most secret organisation. She is the best – and she always works alone. Sent on a desperate mission to locate a missing cryptographer who may prove the key to the murders, Killarney finds herself running for her life, from London to Paris to Moscow, leading to a confrontation with a very human evil in the frozen wastelands of Novosibirsk.

Plagued by dreams of a different world, and haunted by a swastika adorned with angel wings, it could take all of Killarney's resources to survive, when Heaven itself may be threatened, and God herself may be walking the earth…

This was the first longer work I ever tried to write and, years later, still seems to me to flow nicely. I was a big fan of the Quiller novels at the time, and was going for that sort of pace and economy. Just with added weird stuff... The book's had a few editions over the years and this latest features a brand-new cover by my comics artist Paul McCaffrey, which I adore! – Lavie Tidhar

The gun was under the pillow and so I used it, emptying three bullets that tore through his torso before exploding, the crystal casing fragmenting and the blood inside hissing as it touched skin.

He was inhumanly large, and as I sent another bullet his way, I watched the blood—human blood, Whitehall volunteers, probably had a drop of mine in it, I hated to give blood, the needles and the smell of medical alcohol and the nurse watching you like a specimen—burn his skin away.

I turned at a sound like breaking glass but it was only a Chinese urn, Ming clay, they were suckers for Ming vases, and I turned back and shot him again, twice, once in each wing.

The blood exploded when it came in touch with the underside of his wing, and his feathers began to burn, the acrid stench making me gag.

Target reached and eliminated, or something like that. I waited as Raphael's great bulk fought to stay corporeal and lost.

Raphael's body shimmered and burnt, reducing to nothing. A halo of light expanded from it, white and clean-burning, almost reaching me.

Then his essence was gone, and it was time to get out of there.

Animal instincts taking over, I was out of the bedroom door and running, scanning for the hidden assassin who could get me at any moment, and then what would they say at the Bureau? We don't talk about our work, and if Whitehall could help it, we wouldn't be talking to each other at all, but sometimes you have to, if only to say, "Tomlin, yeah, I was with him in Tangiers, good man, imagine the East Germans cracking his network, stroke of bad luck," when what we mean is what we know in our hearts, that Tomlin might have been a good guy, but he blew the mission and there was nothing much left of him when they'd finished what they were doing and dumped him in the river, and that this could be us, me, next time, and it was pride, old stupid pride that kept me going as I ran through the mansion and out into the gardens, and continued to run until I reached the gate and opened it and jumped in a taxi and said, "Airport, please."

He hit the gas and we drove away from Raphael's House of Horrors, now minus one, at least, and I could feel myself relax and that was wrong; that was dangerous, and when things seem too easy I get worried.

"Which airline do you need?" he said.

"North Western," I said, which was the agreed code, and he said, "Really? I prefer British Airways," the whole ridiculous affair remaining ridiculous until the second you forget to use it and it's the knife in the kidney, the knife you didn't see inside the wrong newspaper, or the poison-tipped umbrella scratching your leg because you let your guard down for just one second.

"We need to get you out of the country," he said, switching to English, but he didn't take his eyes off the road and that was a good sign; the only thing that could get me out of Warsaw alive right now was a fast car on a one-way journey to the border. When you waste someone like Raphael, there are no doors, there are no holes through which you can escape, and they will hunt you. And don't even think about flying.

He wasn't telling me anything I didn't know, but there was one thing he didn't understand, and it's this: I work alone.

I relied on Control to get me a vehicle, but that was as far as it went, and so I told him to stop, and when he did I pushed him out, had to make a credible job of it, his face roughed up just enough so he would have a legitimate story to tell if he ran into them before he got back to the safe house, not that they like listening to stories, legit or otherwise, when they could just as easily kill you, or suck away the very core of you as you tried uselessly to struggle—it didn't make any difference. They'd take the core of you out and cut it into nice, neat lines and let their disciples snort the remainder of your soul through a straw. If they caught you.

I didn't intend to be caught.

I drove through a road block, and the nerves started playing up, but I was Merely Mary, I was innocent Mary Webb that day, an English teacher, thirty-one and working for VSO, and the soldier didn't look more than twenty and cheerful, and his, "Documents, please," was delivered with a smile, but still—they got Baggott in Iraq with a smile and left him with one, carved like a half-moon into his throat. I never liked the miserable bastard, but still.

The soldier at the checkpoint waved me through. I drove, foot to the accelerator, across barren cold fields.

"The guy you roughed up is going to need a doctor."

"Better that than ending up dead."

Ford waited at the rendezvous point, five kilometres from the East German border. When we're in the field, we expect our Controller to work out the bigger picture, and Ford was good, a short thin man with a balding head and a pair of reading glasses, looking like a maths teacher or a Bible salesman, you'd lose him in a crowd—which is the whole point, really.

Ford looked tired. "Not without a fair bit of muscle," he said. "We even had to activate a deep-cover mole, a sleeper. I don't suppose she'll live." He said that with a soft apologetic air, coughing, and, "Anderson on the Eastern Europe Desk is rather unhappy."

Which is Ford's way of saying "Hopping mad", but I didn't care. He wouldn't say anything without a good reason, but if he meant to push me it didn't work—you can't be pushed past a certain point, and your entire being concentrates on one thing: survival.

So I said, "Can we get a move on?" and he said, "Yes," obviously, and if I was in such a hurry, and I got into the microlight, I'd sit Ford behind me; he was good but I wanted to survive, and when you do, there is only one person you trust.

I'd slid into a pair of overalls and now speeded up along the track road and then we were in the air and climbing, and I was grateful for the overalls. It gets cold quickly up there, and you need the insulation.

Flying blind and in fear of angels, the action is a strange dance, trying to keep between the two realms. There's the human one below, the realm of the Sluzba Bezpieczeństwa and Stasi, of dank cells and rats and beatings, blood in water—but I wasn't going to think about that, I was going to think ahead, to safety, to getting away with it.

There's the human realm, and then there's the heavenly one where the winged predators ruled.

We flew over the border into East Germany and I consulted the map as I let the microlight glide, unassisted, then grabbed hold of the bars again and swooped north, Ford behind me—and I knew the thing with Raphael had been serious, they wouldn't let someone like Ford out of bed for less than a revolution, nukes, or angels.

And they wouldn't have asked for me.

But still we weren't disturbed; the air remained clear and bright, no sign of unfriendly visitations, no sign of wings, and the ground, as much of it as I could see, remained clear of their agents, and we flew until I could smell the sea cutting like a blade against skin, salty and smoky at the same time, and a flare went up and I made an awkward landing, bumpy, but we rode it until the microlight stopped and I got out and, not waiting for Ford to unstrap himself, jumped onto the deck of the boat without ceremony and commandeered the ladies bathrooms.

It gets cold up there.

At 04:15 we touched Dover and at 05:30 I was back in London, alive, and the adrenaline wearing off and needing release, and I went to find Ben and woke him up, which he didn't mind at all.