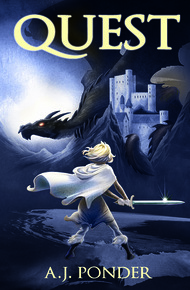 A.J. Ponder has a head full of monsters, and recklessly spills them onto the written page. Beware dragons, dreadbeasts, taniwha, and small children—all are equally dangerous, and capable of treading on your heart—or tearing it, still beating, from your chest.

A.J. Ponder is a USA Today Bestselling Author, recipient of the Wright-Murray Residency, as well as a multi-award winning author, including awards from the New Zealand Society of Authors and the Sir Julius Vogel Awards.

Sylvalla escapes Avondale castle and the life of a princess, in search of the adventure she's always wanted—but once found, adventure bites back.

Fortunately, she is not alone. Unfortunately, her new-found companions are less than heroic. Jonathan would rather make money. Dirk would rather live a long and happy life. And at 150, old Capro would rather stop gallivanting, and harangue unsuspecting wizardry students about his glory days over a nice cup of tea.

Quest has everything; monsters, chases, escapes and a complete lack of true love. Discover Quest by A.J. Ponder and rediscover fantasy.

Sylvalla wasn't the kind of runaway to start contracting any sort of homesickness. And she definitely wasn't about to complain about adventures being horrible and dangerous, or whine that sleeping out under the stars, a campfire at your feet and a sword cradled to your chest, was unpleasant. Granted, it wasn't particularly comfortable, so she enumerated the good points—the weather was warm, her food was hot, and she wasn't being told off every five seconds. Besides, she'd run away to become a hero—comfort wasn't in the job description.

The soft scraping of approaching footsteps disturbed her resolute happiness.

Sylvalla swore silently. The idiot trying to sneak up on her was going to ruin her evening. And possibly her life. Murderer, kidnapper, or mere footpad—whoever it was—must also believe she was deaf.

Refusing to panic—despite her heart beating slightly harder than normal—Sylvalla rose calmly to her feet. Sword gravitating to her hand, almost of its own volition, she turned to meet this new threat.

Dirk smiled. She could handle a sword. He'd heard the Avondale king's daughter wasn't bad for a girl. Now he knew just how arrogant that understatement had been. He admired the way she rose to her feet in a single move. It wasn't quite feline grace, she didn't have the killer's instinct, but her balance and guard were admirable, if a little high and maybe a little tense. Most soldiers wouldn't notice. But Dirk did.

"Ah, Dirk," Sylvalla said, twisting her lips into a smile. Inside she was cursing. Why couldn't it have been your average run-of-the-mill murderer? Why did it have to be the best murderer in five kingdoms? But then, Dirk would not have made such a noisy approach accidentally, so maybe she'd live a while longer. To give herself time to think, Sylvalla paused and looked him up and down. No doubt he had some fanciful notion about bundling her back home like some idiot princess who needed rescuing.

He stepped forward an inch.

She stepped back an inch. "Surely, this is a new role for you? I wonder what the exact title is—Nanny? Kidnapper? Do you really think it worth your trouble to stoop so low?"

Not naturally good with words, Dirk opened and shut his mouth like a stranded fish.

Sylvalla breathed deeply, trying to hold her own tongue, which was extremely good with words—mostly the sorts of words that got her into trouble.

Dirk frowned. "Gracious lady, sword-mast—um—mistress, glorious um—fighter. What role could I possibly play other than myself? A man who is faithful and honest and highly skilled. I could not, would not, pretend to be anything else."

Sylvalla paused again, as if to give full consideration to his answer. As if this wasn't the trite answer she'd hoped for. Both skill and honesty … good, she would demand both. "That is well," she stated firmly. All the while, trying to think ahead, and realising the skills she'd learnt in Diplomacy might not be quite as useless as she'd believed.

Dirk, having previously relied on his sword for all his negotiations, was remarkably inexperienced. He bit, and he bit hard. "Princess, my assistance could be invaluable." He had great hopes for that sentence, thinking it so beautifully vague, and yet he'd fallen right into Sylvalla's trap.

"Maybe, as you say, a man such as yourself would be of some use," she said as if she might be naïve enough to fall for such a bland reassurance. "But who would be accountable for your actions, if anything untoward were to happen to me?"

Sylvalla didn't give him the chance to interject. "I think an oath would set my mind at rest. A simple oath to follow and obey. But it would have to be binding." She smiled vacantly.

Feeling things were getting out of control, Dirk held on doggedly to this one thought, yeah, let's see how well I follow and obey the little minx when she's trussed up like a pig and gagged. I'll be right behind her then, all right, and no mistake.

Dirk heaved a sigh and nodded. She was a princess, and the daughter of his current benefactor. The forms should be followed, had to be followed—he was trapped in the role of hero, and she, damsel in distress. It was a pity she was failing to live up to her part. She didn't even seem upset.

Quite the opposite. Sylvalla was amused at her own audacity. A Blood Oath was binding. Nobody crossed the Realm of Death, unless they wanted to reside there permanently … in perpetual agony. By custom, however, it was also the oath of servitude to royalty. To follow and obey. Dirk would be her guardsman, not her father's. Even if he does try to take me back to Father, which is no doubt his intention.

Sylvalla tried her best to act the empty-headed princess, tossing the remnants of her golden hair and stretching her blue eyes wide. "I ask such a small thing. A tiny pledge, for you to follow and obey. The official pledge to royalty. I think you know how it goes."

Dirk knew it was no simple oath, but seeing that the princess was determined to have her way, he wondered if maybe saying the blood oath would be for the best. Hopefully, it would lull her into a false sense of security. The oath itself was binding, but the fealty could be transferred. If she released him. If? Dirk promised himself he'd make sure of it.

After a while, he got around to the oath.