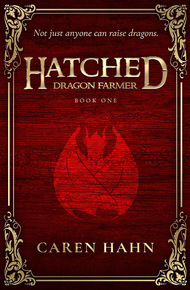 CAREN HAHN specializes in crafting relationship dramas featuring empathetic characters who are exquisitely flawed—the stuff of great book club discussions. She writes primarily in the fantasy and mystery genres and is best known for her Wallkeeper Trilogy and Owl Creek Mysteries. No matter the genre, her richly layered plots and can't-put-it-down conclusions offer readers a thrilling ride blended with deep emotional resonance. Caren lives in the Pacific Northwest with her husband and six children.

Visit carenhahn.com to receive a free collection of short stories and learn more about her upcoming projects.

Domesticated dragons. What could go wrong?

Charl comes from a long line of farmers and has the scars to prove it. Abandoned by her brother and distracted by her handsome neighbor, it's up to Charl to keep the farm together without getting herself killed by the livestock.

After all, not just anyone can raise dragons.

But Charl keeps laying hens, not breeders. So when an egg unexpectedly hatches, she has a lot of questions. As does the Magical Regulation Squad who comes pounding at her door, ready to arrest Charl for breeding without a license.

Poised to lose everything—her dragons, her farm, and her freedom—Charl agrees to join the hunt for the illegal dragon who got her into this mess. Yet probing too deep into the shadows will uncover more than just dragons and a debilitating fear of heights, for there lie secrets that will turn her world upside down.

The dragon was gray and moist with wings tucked against its body so tightly Charl couldn't be completely sure they were even there. It moved unsteadily on its legs, and Charl was seized with a desire to name it and feed it and keep it safe.

"I can't believe it," she said, part in wonder and part in fear as she looked at her impending doom. "What am I going to do now?"

Prax knelt down before the hatchling and ran a hand along its back. "Well, I imagine he's probably pretty hungry. Aren't you, little guy?"

The hatchling opened its mouth and Prax cooed at it. "Look at those tiny teeth. You're just a harmless little thing, aren't you?"

The dragon let out a mewling cough and ignited Prax's shirt.

Prax jumped, rocking backward into the dirt and slapping at his shirt. Stunned, Charl shook herself into action, grabbing her discarded coat and rushing to smother the flames. It took only seconds, but they sat together in shock after it was over, breathing heavily.

Prax's eyes were wide as they met hers, then crinkled into a pained grin.

"I guess I should have let the dragon farmer go first."

"Don't be. It was my own fault. I forgot they aren't born fireless."

"Are you badly burned?" Charl carefully removed the coat and inspected his red skin, already blistering in places. "You're lucky. If it were much older, we wouldn't have been able to smother the flames so easily."

Prax winced as he leaned forward and inspected the burns himself. "No harm done. I probably won't even have a scar when it's healed. What's the point of a dragon wound if I can't even show the scar?"

"You wouldn't be able to tell anyone about it anyway," Charl protested, but she was relieved that he hadn't lost his good humor. "I'll get you some wet cloths."

By the time she returned with clean rags and a bucket of cold water, Prax was sitting on the wagon bed, watching the hatchling wander shakily around the yard. Already it was drying and its color was emerging as a deep green. When it opened its mouth to chirp, there were little bud-like teeth lining its jaws.

Praxton had removed what remained of his shirt, and Charl hesitated. She'd seen Prax working without a shirt before, but never from this close. And now she was supposed to touch him? Surely he would hear her heart galloping like a herd of centaurs. She tried to focus on something else besides the tautness of his muscles as she laid the wet cloths across his chest. It was no use, and heat rose in her cheeks like she'd swallowed a phoenix. But Prax didn't seem to notice, his thoughts clearly wandering.

"Who do you suppose the father is?"

"Hmm?" Charl's thoughts had wandered too. She shook her head to clear it, tossing her braid over her shoulder to avoid meeting his eyes. "There can't be a father. It's impossible."

Prax snorted. "No, it's impossible not to have a father."

"I mean, there's no way Stella could have mated with any male dragon. The barn is secure. There are no male dragons in the area, very few even left in existence. The idea is laughable." Finished, Charl sat beside him on the wagon bed and watched the hatchling.

"Tell that to little Forest here."

Prax shrugged. "He's the color of shadows in the understory of the forest."

"You don't mean that," he insisted. "If you'd wanted him dead, you could have just let him die in the egg."

Charl sighed. "I said that's what we'd do if we were smart. I didn't say I was smart."

"Well, then. What should we do with him?"

"We? Are you a dragon farmer now?"

"I figure you have two options. Give him to his mother—"

"I wouldn't dare. If she's that mean when she's brooding, I'd hate to see what she's like protecting her young."

Prax smiled as if he'd expected this. "Then let me take him home."

Charl looked at him in disbelief. His light brown eyes were bright with mischief. What had happened to the sensible neighbor who had made his farm prosper through hard work and frugality?

"Are you crazy? You don't know the first thing about caring for a dragon hatchling."

"Don't be an idiot. You would risk everything for this?"

The hatchling was poking through the shredded wood of the door. It made a hissing sound and fire streamed out of its mouth and licked the debris.

"Oh for crying out—" Charl grabbed the bucket of water and doused the flaming door. "I can't leave you alone for one minute."

Prax laughed. "I like him. Let me take him home. That will keep him far away from Stella. There's an old dugout cellar behind my house. No wood anywhere. Nothing to catch fire. I'll keep him in there. What do you think he eats?"

Charl looked at Prax, considering, until she remembered he wasn't wearing a shirt and turned her gaze to the hatchling instead. She didn't know what to do with him any more than Prax did, and she already had her hands full with the other dragons.

"Let me get my book," she conceded. "But the second you think he's too much for you—or you're worried about being discovered—you bring him straight back. Might as well only risk one of our necks. If I go to prison, it won't do me any good for you to go with me."

Prax grinned. "Did you hear that?"