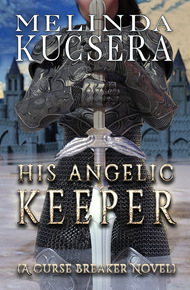 Melinda Kucsera writes epic fantasy adventures when armies of fictional characters aren't storming her apartment and begging for page time. Some characters will do anything for a scene, but that's another story. If you want to meet those characters, check out her books.

His Angelic Keeper by Melinda Kucsera

Sovvan is dead but doesn't know it because the creatures who run the place don't want her to remember anything. They take every thought in her head, making it hard to outsmart them. But a demon threatens her twin, and she can't save him if she can't remember him, so those memory-eating creatures must go. Too bad no one will lend her a sword.

A ghost can't die again, but Fate isn't kind to the women who thwart it. Sovvan might cease to exist if she saves her twin, but if she doesn't, that demon will drag him to Hell and separate them forever. Who knew the afterlife was such an epic fantasy adventure?

Where am I? Everything was gray and blurry. She blinked to clear her eyes, but the grayness refused to go away. Where was I before I arrived here?

When she tried to remember, she found nothing. Something had scoured her mind clean of everything except that one conviction. I was somewhere else in the middle of doing something important before I ended up here. That wrenching feeling of displacement was so visceral, she couldn't deny it. But it gave her some mental ground to build on. So she clung to that scrap of information and searched for more.

This fog can't have completely erased my mind if I have even a vague sense of what I was doing before I woke up here. She smiled, already feeling a little more in control of things. First things first, she must find who or what stole her memories, and if that person, place, or thing could still take them.

Her grin faltered as that gray nothingness wrapped its colloidal tentacles around her, and her newly formed plan disintegrated. Oh, no, you don't. She tried to hold on to the fragments of her plan, but they slipped away, word by word, dissolving into that grayness until she was a listless husk twisting in that all-encompassing fog again.

An unknown amount of time later, whispers vibrated her foggy prison as she came back to herself. Was it a cocoon? If it was, then it wasn't made from anything she could touch or feel. How strange. I should be freaked out by this, but I'm not. Why aren't I?

She just felt empty, as if the fog had sucked the ability to feel anything right out of her. At least she could still think. This place is trying to make me apathetic, so I'll be a good prisoner and wallow away the years in my bland cell. Yeah, that's not happening.

She tried to remember something as the fog rolled in endless waves through her mind, wiping away each attempt to remember anything at all. But she refused to give up. Someone didn't want her to remember. I must know something important. How can I figure out what without tipping off the gray thing encasing me?

Now that was a muddle. Could it sense her thoughts? Probably. How else could it know she'd recalled something? But she didn't know that for certain. The fog could've wiped my mind a thousand times since I arrived here. I have only a vague sense of purpose to go on. And that too might be wrong.

She drifted then, floating in the gray sea of forgetfulness until whispers disturbed the quiet again. They grew louder and less intelligible as the grayness under her rippled like disturbed water. Was there water under there?

As the word 'water' repeated in her head, a memory stirred. But the gray fog vacuumed it up before it could rise to the level of conscious thought. The water here was important. Her nemesis couldn't erase that fact. The word had left an indelible mark on her psyche—or a well-trod path from countless memories she couldn't yet retrieve. She suppressed a smile and blanked her mind before the fog sensed the change in her and closed in to kill it.

I remember nothing. I am nothing. She let that grayness pass over her, and its foggy tentacles stayed out of her mind. The fog flowed sluggishly by as if it had eaten too much and was considering whether it had room for more. Or was that just wishful thinking?

My memories couldn't have filled it up. The fog was vast. Unless she was inside the belly of a beast, but that seemed too strange a scenario to contemplate.

All the truly enormous magical beasts were long extinct. Her gut confirmed that, and she didn't need her memories to back up that certainty. No, she wasn't inside anything except a bizarre prison, and prisons had walls to scale and locked doors she could pick. If she could find her way past this gray menace.

Did the fog seem vast because it was all she saw? How far away was that horizon? This misty plane seemed to stretch on forever in all directions without end or relief. But nothing was that large. The fog could be an exotic creature, or one could be generating it like a defense mechanism. Given its memory-stealing properties, that made sense.

It might even fear me. She laughed at the idea of anything fearing her. Still, the idea had some merit. Everyone feared something. Maybe I'm more fearsome than I feel.

That voice called again in no language she could understand, but the ground didn't react this time. Even when the call grew fainter, her gut still urged her to hide, and that didn't make any sense at all.

If someone's sharing this bizarre experience, I should find them and compare notes. Maybe they'd know how they got here, or better yet, how to escape.

But her gut refused to unclench. It held her down under the fog and kept her quiet. Not everyone here might be friendly. She'd forgotten too much. How can I tell who's a friend and who's the foe who tossed me in here?

The voice continued to call while its owner moved further away. She still couldn't tell what this person was shouting, or if the voice was the same one as before. It might not be. There could be a whole enclave hidden in this gray stuff, and that memory-stealing fog might protect their home.

Would they help me if I made myself known to them? Probably not, you don't shroud your home in forgetfulness unless you want to discourage visitors. Alright, new plan—avoid those searchers. That should be easy enough, but following them in this fog might not be.