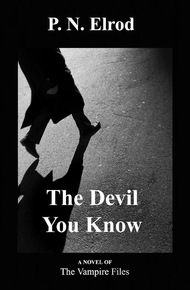 The Devil You Know by P. N. Elrod

Problem: There's more than one body in the grave.

Wise-cracking, street-savvy vampire gumshoe Fleming teams up with the wickedly genteel Jonathan Barrett, Gentleman Vampire, who's found a body on his Long Island estate and has no idea what to do about it.  Clues take Jack back to his old stamping grounds in the newspaper world, hampered by Barrett, who has his own ideas about how to conduct a murder investigation.  Before you can say "machine gun" both are up to their fangs in mobsters, murder, and mayhem in this fast-paced mystery adventure set in post-Prohibition New York.

Last May, while I was exhibiting at Dallas Comic Con, Pat Elrod came up to our table in the quiet (but simultaneously frantic) time before opening, and we commiserated on the confusing, scary, and exciting upheavals going on in the publishing industry. I told her how StoryBundle was such a boon for indie writers, and since she practically defined the genre of Urban Fantasy, I asked if she had anything that would fit in our Urban Fantasy bundle. She scrambled to come up with an available title, and I am damned pleased to have her in here. – Kevin J. Anderson

Barrett drove as before. Neither of us talked, but it was an oddly companionable silence.

We pulled in through the estate gates. He followed the long drive up to a point, then veered off, the Studibaker's wheels churning uncertainly over the snow-caked lawn toward the site of the old house's excavation. What the hell?

He cut the motor, shrugging a little in response to my look. "I'll explain. If you would come with me . . . ?"

The deepest night is like daylight to us, but he dug a flashlight from the trunk. Skirting the big piles of raw earth and mud-smeared trash, we moved closer to the pit, the heavy digging equipment looming like snoozing elephants. The wind had picked up and whistled a freezing note in my ears. I hunched futilely against its annoyance.

"This was dreadful work," he said. "Brought back such a lot of unpleasant memories."

All I could think was, that despite what he'd said earlier, he might have some archaic debt of honor to settle with me. Guys from his century fought duels for less. He could be planning to cosh me on the noggin and drop what was left into the deep end. A few minutes with the bulldozer would finish the job.

"I need your advice."

So he'd said earlier. At the first sudden move I'd vanish.

In a broad space between the big machines was a roughly folded tarp with the remains of cut rope dangling from its eyelets. That must have come from the back porch where it previously covered the summer furniture. When I drew breath to ask a question the stink of decomposition hit me between the eyes.

He pulled the tarp away, revealing an oblong wooden tool box. He squatted next to the box and opened it. The inside was packed to the top with snow. It being so cold and with the tarp for shade, there wasn't much melting.

Barrett brushed snow from something about the size of a loaf of bread. With thumb and forefinger and no small distaste, he picked out the mud-smeared object from its icy nest and set it down across one corner of the box. Just so there was no doubt about what he wanted to show, he played the flashlight's beam over the thing.

It was a man's shoe—with the foot still in it.