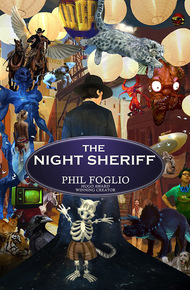 PHIL FOGLIO spends most of his time in the field, collecting legends, folk songs, anecdotes, and gossip relating to Sparks and their effects on village society and "folk science". This is a bit odd, as he was originally hired by Transylvania Polygnostic University to teach Modern Dance. He first became interested in Heterodyne stories while doing research on simple automatons and was actually present when the Lady Heterodyne unleashed her "Battle Circus" upon Baron Klaus Wulfenbach. Through subsequent research, bribery, and rampant speculation, the professor has managed to fill in a great many of the narrative gaps in the early life of Agatha Heterodyne. He enjoys botany, mechanical illustration, entomology and -in moderation- modern dance.

The Night Sheriff by Phil Foglio

From the turreted castle and Main Street to Monte Cristo Island and Kukuanaland, Bartholomew Zenon's Zenon Land is protected by The Night Sheriff. Day and night, he is burdened by a witch's curse to be aware of all that live and play within the massive fantasy theme park.

Now an attack on the park by a "monster hunter" who knows far too much threatens everything; guests, staff, and fellow supernaturals taking refuge in the park. The Night Sheriff must scramble to uncover not only the source of the threat, but secrets of the park even he was not aware of.

I soar over my kingdom.

It's early evening and the vast shield of the night sky lies above me. I miss the stars of my youth, the vast tapestries of patterned lights that wheeled down the seasons, the endless display of celestial majesty. There are stars visible, but they are a paltry remnant that makes mock of my memories. The moon is still there, of course. I think I would have gone mad if that ancient sentinel and nighttime companion had also been obscured by the enveloping vapors of this land's machines.

As it is, I must concede that there are more of them these nights than there were even twenty years ago, a welcome trend, if it continues. The air is cleaner, though now I hear tell that it is the very glow of the city lights that work to obscure the heavens. If it isn't one thing, it's another.

Even after all this time, I will admit that the counterpane of lights below still causes an inrush of breath in wonder and delight at the beauty that humanity creates all too inadvertently, but these glowing confections, even with their dancing neon and sheets of LEDs, compare poorly to my no doubt jaundiced memories of the skies of yore. Call me a traditionalist.

Directly below me, the castle is lit with a particularly revolting chartreuse and pink lighting scheme. The surrounding streets and buildings are wreathed with several million lights, and hidden projectors shift colors to cheerful effect. The hidden speakers play a compositional hash of tunes, mixed and reengineered to bring a smile of memory to lips and a continuous current of energy to tired limbs.

The crowds below are clamorous and giddy with an excitement that even the most jaded of them are surprised to find still lurking within their breast. It is the time of night when even feet that have walked a league or more in fits and starts find themselves quickening as they head for a final rendezvous, jollied along by the strolling vendors selling balloons and glow sticks, assorted snacks and light-up toys.

More and more of our guests are beginning to line the central streets, staking out a tiny, impermanent claim, a temporary place of refuge against the crush of strangers, girt with insubstantial boundaries that hover scant inches away. Yet I have seen people defend these phantom territories more vigorously than they would their homes, even though, in an hour or so, these impermanent estates will dissipate into history without a second thought.

They gather to witness the nightly parade. You'd think these early defenders to be premature, considering that many of them begin settling as much as an hour before the first funambulist strides forth, but grim reality justifies their actions, as by the time the opening marching band strides down the boulevard, the seething crowd of watchers will easily be a dozen people deep, and many a tardy tot will have to be hoisted up on the shoulders of their sire to see the passing carnival in all its glory.

The shops lining the streets are beginning to see their final sales rush, though this early frenzy will be dwarfed by the mob that will descend upon them after the parade itself, as the people, energized by the procession of monsters and wonders that have pranced past them, belatedly realize that the time left to buy that last souvenir before they must depart is dwindling quickly.

The lights of the pavilions and the rides keep them from seeing me as I glide on by overhead. I swoop closer and taste their emotions. Youthful joy and excitement, with occasional dots of parental exasperation. Nothing untoward.

I sail past the bronze statue of Bartholomew Zenon, the man responsible for it all, his hand companionably slung about the shoulder of Preston Platypus, the company's world-famous mascot. Even now, visitors are draping themselves over the statues, getting photographed one final time before they leave for the evening. I sniff deeply, tasting the winds, and leave the center of the park behind me. Like the moon pulling the tides, the incipient parade's gravity has reached out to the park's extremes, beguiling guests towards the heart of my kingdom, leaving the outer reaches quieter, reserved for those who care not for parades or crowds, as well as the assorted vendors who remain to tend to their needs and desires.

I enjoy this, sailing alone above it all, but I'm feeling a bit peckish. I settle down atop the mountain the Awesome Avalanche ride bursts forth from, and even as I allow my own weight to manifest, I feel the all-too-familiar figure of Bone Cat coalescing upon my shoulder.

"Took you long enough," the familiar voice mutters in my ear. I reach up and stroke the cartoonishly absurd earbones atop his head. He drapes himself across my shoulders with a purr reminiscent of an idling chainsaw. He's happy tonight.

Below us, the periodic bursts of terror as the riders see the drop before them are an adequate snack, but I'm in the mood for heartier fare. I settle down, and fold into myself so that anyone actually looking would just think me another faux rocky outcrop. I allow my senses to spread, seeping throughout this corner of my kingdom like a questing, invisible fog. It's a weekday, so the crowds are slightly smaller. Early summer, so the night is warm, not that it ever really gets cold in Southern California, not cold like it used to get back home.

Occasionally I miss the cold. Real cold, the kind that used to come with the winds that screamed down off the mountains in the dead of winter, sending the peasants huddling up against their fires, their livestock, and each other for comfort and warmth. I liked the way the cold felt. The physical sensation. It made my skin tighten, and I felt more sleek and—I guess the modern word would be aerodynamic. Silly, really. But as someone who appreciates the subtly different types of fear that people are capable of generating, I will confess that the fear of the cold was a seasonal favorite. It was so primal. Ah well, different days, different ways.

Who else is back here, walking the dark paths? There are still those visitors, young and old, who are simply questing towards the next ride. This is a special time for them. The park is emptier, the lines are shorter, and their own exuberance adds to the experience of others like them, multiplying the effect and filling the very air with a sense of adventure.

Strolling amongst them are people moving at a more sedate pace. They are not here for the rides, or the souvenirs. I recognize many of them. Older couples. More interested in each other than in yet another spectacle. The myriad of lights and the exotic foliage is merely a backdrop to the quiet magic and excitement they have brought with them. People who have come to the park because it is a park. A few acres of grass and trees, ponds and romantic lamp-lighted darkness far from the cares and concerns of the surrounding city that might as well be across the salty sea. A familiar, safe, and comfortable place inhabited by sleepy birds, recorded crickets, and animatronic animals. Keeping it that way is why I'm here.

A child is crying. A quick sharpening of focus and I can ignore it. Simply another tyke stuffed full of sugar and over-stimulated by wonders, being dragged towards the entrance by determined parents. I sigh; another section perhaps—

I hate it when he does that. He claims that Death is, in fact, an anthropomorphic entity that he can actually see, even though I cannot. Now, while I can attest that the supernatural world overlays the mundane, and that there are additional layers of reality that are unperceived by the majority of people, I still find it disquieting that there may be further levels that even I cannot see. Personally, I believe that he is yanking my chain, as the kids say, but I must acknowledge that he is always accurate. "To the North," he whispers.

I allow myself to tumble backwards, unfurling myself into the air, and take an immature pleasure in my companion's yowl of annoyance as he fades away. To the North. Let's see … there's Monte Cristo Island, the Lost Temple, Kukuanaland, the Happiness Machine—

And there it is. In the back. Away from the great ever-changing clock and the crowds waiting for the boats. The service door used by park personnel is hanging open. That is very much against company policy. I swoop down and see that the lock has been broken. A moment later I'm in the anteroom, Bone Cat again upon my shoulder. Even back here the ever-playing music hammers at my ears. I consider taking one of the microphone-equipped headsets hanging from the rack, but I need to stay flexible. Unnoticed by most people is a small tube hanging from the ceiling. I blow into it and then speak clearly, "There is an intruder inside." I glance at Bone Cat, who nods. "I have reason to believe that he or she is dangerous."

Less than thirty seconds later, a small green person with an immense nose and an intricately knotted beard pops out of a small door. Automatically my hand grips the nape of Bone Cat's neck. There is no time for his usual foolishness. This is Punch-Press, a senior gremlin. We bow to one another. "Old Tool," he greets me with his usual grin. Gremlins are a cheerful bunch, as a rule. Bone Cat sniggers even though that's been my name amongst the gremlins for fifty years. Partially because that is the sort of name that the gremlins themselves have, but mostly, I believe, because they cannot manage to pronounce my real one, and gremlins hate to do something incorrectly.

He opens a larger door, and we head into the backstage area of the ride. "Found your guy. He's in Asia." Ah. Towards the center of the ride. Punch-Press continues, "There is something seriously wrong with him."