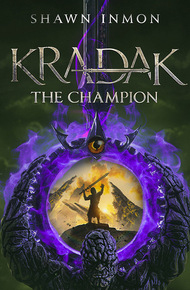 Shawn Inmon is a full-time writer who writes speculative fiction and fantasy. He published his first book, a memoir about life in small town America in the 1970s, in 2012. He thought it would be the only book he would ever write. Ten years and thirty-two books later, he was proven to be wrong again, as he so often is.

His sixteen book Middle Falls Time Travel series addresses the question of What would you do if you could do it all again? Protagonists in that series die and wake up at an earlier point in their lives. They often find that knowing what is coming does not help as much as you might think. His Alex Hawk Time Travel series poses the question of whether a modern man could survive in a distant future that closely resembles our ancient past. His Kradak the Champion series mixes humor and fantasy to form an adventure series that never takes itself too seriously.

Kradak the Champion by Shawn Inmon

Steve Montross plays a character called Kradak the Champion in a series of Hollywood B-movies. When two adventurers slip through a portal into our world, they mistake Steve for the hero he plays on the screen. It is only when they drag him back across the portal that they find who he actually is.

It's too late to fix their mistake. The portal is once again closed. Steve will have to become Kradak or the fate of both worlds may be sealed.

They call him Kradak, but his friends call him Steve.

Kradak stood atop a mountain of bodies. Unfortunately, they weren't all dead bodies, which would have made standing on them easier. Some of these bodies still moaned and twitched, which made finding a good foothold difficult.

Kradak was a champion, however. A hero. When things were at their worst, he always prevailed.

In one hand, he held a great broadsword. His mighty chest and arms were bleeding from a dozen places—a natural side effect of taking on a litany of nightmare creatures. His long hair hung over his face and a menacing snarl seemed permanently fixed on his face.

A huge, two-headed dog stood at the bottom of the pile of bodies.

"Two heads can be killed as easily as one," Kradak muttered. It was the kind of line a hero muttered when faced with an impossible situation.

The dog leaped at him, teeth bared, all four eyes blazing a demonic red.

Kradak swung his broadsword with all his considerable might.

The blade of the sword did the seemingly impossible, cutting neatly through the body of the demon dog and dividing it in half. The red of the now-unstaring eyes went out and its corpse fell off in two different directions.

Kradak lifted the sword high above his head.

The camera zoomed in on Kradak's handsome face as his snarl turned into a winning smile. He turned directly toward it with a sly wink. "Never underestimate a champion."

It wasn't much of a tag line, but for some reason, it had caught on. Now it was de rigueur for him to say it at least twice per film.

As the credits ended and the lights came up, Steve Montross wished he could anonymously slink back to his condo, nurse his wounded ego, and try to make a plan to reclaim some momentum in his acting career.

Anonymity was not on the menu on this night, though.

A small man with slicked-back hair, a bounce in his step and a million-watt smile jumped up onto what passed as a stage in this small theater.

"Hey, howsabout that, folks? You were the first people in the entire world to see that fantastic film! And what a treat we've got in store for you tonight. Live and in person, we've got the star of the show, Kradak himself, Steve Montross."

Steve again looked at the people in the seats, hoping against hope that they would just ignore the studio publicist.

Those who were half out of their seat sat back down and most people clapped politely. A woman in the back even gave a war whoop, which was what Kradak did each time he beheaded someone with his sword.

Steve lifted his hand and acknowledged the applause.

"I want to thank you for coming out tonight. We're real excited about this film."

How many more lies do I have to tell before I can go home and have a stiff drink?

"So, does anyone have any questions for me?"

A middle-aged woman in the front row stood and said, "What's your next movie going to be? More Kradak?"

A softball, and an expected one at that.

"The studio is developing a new Kradak movie, yes," Steve said. "But I'm in negotiations on quite a few other projects, too."

"Sure," the woman answered. "Any chance you're going to do a nude scene in any of them?"

That brought a wave of laughter from the crowd.

Steve blushed a little, then said, "I think what I wear as Kradak is close enough to naked."

"Not for me," the woman in front said.