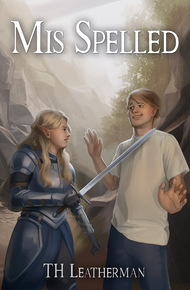 High School never prepared Evan for anything like this.

One minute, Texas. Next minute, fairyland. To get back home, he has to complete three quests for the queen of the elves. Each quest is a near-impossible task to defeat fearsome beasts or overcome impossible odds. The chance of Evan succeeding is just like a fairytale, Grimm.

Evan's one advantage is that in Stellaluna, he can learn anyone else's magic, but he has to find someone to teach him. There is no knight school for apprentice wizards, so he'll have to get creative. Perhaps he can strike a deal. Deals with elves always work out well, right?

It's a magical romp across the realm with mischievous sprites, devious elves, and a crazy old wizard who's a few ants short of a picnic.

I landed... somewhere else. Pain lanced up my ankle.

My ears popped like someone had used an icepick on them. The mist was gone. The sun was higher. Late afternoon? The smell of pine was stronger. Otherwise, it looked a lot like the stream bed I'd just left. And then there were the people. Yelling and fighting. Some people with pointy ears and fancy armor (elves?) swinging swords at a bunch of shorter green guys in leather (goblins, maybe?).

An unbelievable amount of pressure built in my stomach. It was unlike any burp I'd ever had. It started in my shoes, went through my gut, and out of my mouth like a cannon. "Buuurrrruuup!"

It echoed off the walls of the ravine. The force of it knocked one of the warty green guys down. I wasn't aiming for him or anything, he just happened to be fighting an elf in front of me.

All fighting stopped. All eyes turned to me.

The goblin I'd belched off his feet screamed and backpedaled. The other goblins shook in their boots. Liquid ran down their legs. Scrambling, the fallen goblin ran like a horde of rampaging monsters was after him. I checked. No monsters. But all the other goblins took off after him. They scurried up the other side of the ravine, leaving me and the elves to stare after them.

Despite the seriousness of the situation, I was a little offended. I sniffed at my armpits. Nope, anti-stinky stuff was still anti-stink.

Even more weird was that I could swear I saw a black cat at the top of the ravine, but I blinked and it was gone.

Two of the pointy-eared people (I tried unsuccessfully to stop thinking of them as elves) approached me. Their armor was a shiny blue-green color, except where it was marred with dirt or blood.

The guy opened his mouth, and a weird bird warbling came out.

Birdcall? That couldn't be right. I shook my noggin to clear it, then tapped my ear to show I didn't understand.

The guy scowled and made the same bird sounds again.

I shook my head. Whoever these people were, they talked like a bunch of deranged robins.

The blonde woman eyed me oddly, then twisted her head sideways like she was looking over my shoulder. Or at the side of my head?

I touched the tops of my ears. They were all staring at them. "O-kay. Awkward."

The blonde woman looked like the head cheerleader from high school, short and athletic. I focused on keeping my gaze on those awesome leaf green peepers of hers. Getting caught staring elsewhere would not make a good impression. It was hard, though, because she was achingly beautiful. Just having her attention on me caused my heart to race. She closed her eyes and rubbed her temples for a moment, then refocused on me. "Hu-man?"

Human? Okay, this was getting weirder and weirder. Still, they had pointy ears and odd-looking eyes, so I nodded.

The elves glanced at each other, then spoke in their bird song language. And now it was an entire flock of deranged robins. Great.

They decided on something, and the woman approached me again. She pointed to her chest. "Thasina."

"Thasina," I repeated, pointing to her. I pointed to my chest. "Evan."

She smiled and pointed to her red-haired companion, who scowled at me. "Daricas."

I repeated his name as well.

Thasina swept her arm, indicating that I should follow them. Having no better options, I did as she asked. And my ankle chose that moment to remind me I'd recently been a klutz. I stumbled and groaned in pain.

The blonde elf held a palm up. I stopped. She knelt and put her hands on my shin. Warmth spread through my foot. She stood up, and I tested my ankle. The pain had vanished.

We climbed out of the ravine. Everything was subtly different. I knew the woods around my school pretty well. I enjoyed hiking, and it was faster to go through the woods than to take the roads around. Jerrod didn't like the woods, so it was a win-win as far as I was concerned. But my brain kept having hiccups. The pine needles were longer. Where there was supposed to be a large tree, there wasn't one. Sometimes there were large rocks where there shouldn't be.

Okay, not Texas, and maybe not Earth. Assuming the sun worked the same here, it was now late afternoon. There wasn't a trail that I could see. It didn't take long to go beyond the woods that I knew into terra incog-not-knownia. Nothing looked familiar, and I realized I might not find my way back. Yeah, Toto, we definitely ain't in Texas no more.