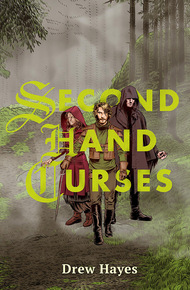 Drew Hayes is an author from Texas who has written several books and found the gumption to publish a few (so far). He graduated from Texas Tech with a B.A. in English, because evidently he's not familiar with what the term "employable" means. You can read more of his growing work at his website, www.drewhayesnovels.com, send him mail and movie offers at Novelistdrew@gmail.com, or just follow his twitter: DrewHayesNovels. Drew has been called one of the most profound, prolific, and talented authors of his generation, but a table full of drunks will say almost anything when offered a round of free shots. Drew feels kind of like a D-bag writing about himself in the third person like this. He does appreciate that you're still reading, though.

Drew would like to sit down and have a beer with you. Or a cocktail. He's not here to judge your preferences. Drew is terrible at being serious, and has no real idea what a snippet biography is meant to convey anyway. Drew thinks you are awesome just the way you are. That part, he meant. Drew is off to go high-five random people, because who doesn't love a good high-five? No one, that's who.

When your fairy godmother threatens to enslave you with a curse - when a malevolent piper solves your rat problem but steals your children - when you seek revenge on the prince who turned you into a frog - who can you turn to in your hour of need? The band of scoundrels known far and wide as the Bastard Champions - the swashbuckling trio who travel a world of legend, seeking adventure and righting wrongs - as long as there's enough gold to be earned.

Second Hand Curses adds a dash of sly wit and a heaping portion of action to the fairy tales you thought you knew.

I love this book. I love everything Drew Hayes writes, but this standalone is a fun exploration of a high fantasy, folklore-themed world with "heroes" that leap off the page, even when they're leaping from frying pan straight into the fire. – John G. Hartness

"And what happened after you lost the shoe?" Jack asked. He was wearing his client face, radiating confidence and just a touch of swarthy danger as he listened to the straw-haired young woman's tale. One could say many things about Jack, though few that Marie or Frank hadn't already uttered, but the fact remained that he had the touch when dealing with people. At least, when dealing with the sorts of people who put themselves in the kinds of situations that necessitated meeting Jack.

The girl swallowed hard and glanced out the small window of her cottage. Sunlight shone on the garden outside, and the sounds of birds could be heard even through the walls. No doubt she was yearning to be out there, in the sun, away from such sordid discussions. Such desires were understandable, but ultimately futile. The sun would set, and when the moon rose her troubles would return. Better to sacrifice time in the sun now and face the darkness with some preparation.

"I ran home. The carriage was a pumpkin again, so I couldn't very well take that. By the time I got back it was nearly sunrise. I thought it had been a wonderful night. Then, the next evening…she returned."

"Let me take a guess," Jack said. "Told you that it was time to pay your debt. Said you'd be going with her, maybe she even dressed it up a bit by making the place sound nice. Of course, that's all nonsense. You're going to be a slave, at best."

The woman nodded, her eyes beginning to fill with tears. "After…after I told her I wanted to stay she got angry. I think she would have forced me to come, but for some reason she couldn't."

"Your deal was incomplete." Frank's tone was deep and somber, slipping out from the robe and hood that hid the majority of his features. At the sound of his voice, their young client jumped the smallest bit. "A Feystian bargain is a complicated piece of magic. Until your wish has been fully granted—in this case I'd assume winning the prince's heart—she cannot take possession of you."

"Too bad there are royal emissaries all over town looking for the mystery woman he danced with," Marie muttered. Unlike Frank, Marie wore no robe, only simple, functional clothes that bore a minor shape-changing enchantment. Not that the spell was discernible with the naked eye. Much like Marie's own gifts, it remained unseen until it was needed. "You must have left one hell of an impression."

"It was a magical night," the girl replied. "We were true loves; I knew it the minute our eyes met."

Jack didn't say it, but he suspected that this girl's adoration for the prince, and his for her, had also been supplemented by fairy magic. True love certainly existed, it just didn't seem likely that she'd cast this kind of bargain and end up meeting hers. But even if the love were the genuine article, it didn't help them. True love could do a lot, but contracts were contracts no matter how one looked at them.

"After she showed up, that's when you started doing a little research and asking around," Jack said, moving the conversation back on target.

"Yes, but no one would help me. Everyone I spoke to told me I had made my bargain and they couldn't lend aid." Her hands shook intermittently as she talked. "But the fairy kept returning, and now I think she might be helping the prince find me. I was frantic to find a solution, so when someone told me about you…"

"It's fine, we're not the folks people come to unless they're frantic in the first place." Jack leaned back in the chair, keeping his body language as relaxed as possible. "Technically speaking, you're in the wrong here. You made a deal, and the fairy has upheld her end of the bargain. What you're trying to do is welsh, which puts you on the side of the wicked. That means while you may not have the Narrative set against you, it certainly isn't on your side. No noble knight is going to lift a blade for that situation. Lucky for you, Cinderella, we don't give two dragon scales about whether you're on the side of good or evil. All we care about is the color of your gold. And after hearing the entirety of your situation, I think we can come to an arrangement."

"I…I don't have much. My stepmother and her daughters control most of our wealth, and even that is paltry compared to what it was when my father ran the farm."

"No, you probably can't afford us." Before she could panic, Jack flashed a comforting smile and continued. "But the prince could, easily. I imagine his newest sweetie will have access to plenty of gold. More than enough to cover our paltry fees."

"I thought the fact that I wasn't with the prince was all that was keeping me safe right now." Cinderella's eyes had stopped flowing with tears; now they were wide in confusion.

"That's what we call a temporary solution," Jack explained. "Sooner or later, he'll find you, and when he does we both know that sweet love will take over. As soon as his heart truly belongs to you—poof. No more clause in the contract."

"So what can you do? Do you have a way to break the contract?" Cinderella leaned forward, unaware of the view she gave down the top of her dress. Jack noted her breasts with clinical appreciation, but kept his demeanor professional. Greed trumped lust in his hierarchy of sins, and besides, she was as innocent as a doe in fresh snow. Jack preferred women with a bit more wit and spice.

"No one can break a fairy contract," Marie said. "At least, no one we've run across yet."

"Too true, I'm afraid there is no getting out of the contract," Jack agreed. "There are, however, longer short-term solutions that we can employ."