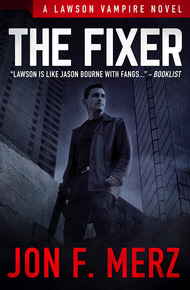 Jon F. Merz is the author of over 50 novels including 11 installments in the bestselling Rogue Angel series. THE FIXER is book 1 in his Lawson Vampire series which spans more than 35 adventures so far. His short story "Prisoner 392" won an Honorable Mention in the 2004 edition of The Year's Best Fantasy & Horror. Jon is also an actor, starring in the TV mini-series The Cars That Made America, in feature films like Mother/Android, and the forthcoming Whitney Houston biopic I Wanna Dance With Somebody among other TV and film projects. He runs Ten 21 Studios in Providence, RI, a multimedia production company. Prior to all of this, Jon served in the US Air Force, worked for the US Government, and handled executive protection and sensitive corporate investigations for various Fortune 500 clients. A lifelong martial artist, he holds a 5th degree black belt in Togakure-ryu Ninjutsu earned directly from the 34th Grandmaster during a trip to Japan in 2003. He lives outside of Boston with his wife and two sons.

The Fixer by Jon F. Merz

Not every vampire likes drinking blood…

Meet Lawson: vampire by birth, Fixer by trade. His mission: preserve the secret existence of living vampires by any means necessary. There's just one problem - his oldest enemy Cosgrove is back, killing humans and threatening to unleash an ancient unholy evil. Can Lawson stop Cosgrove and still adhere to the very laws he has sworn to uphold by not falling in love with a beautiful human ex-KGB assassin named Talya?

Jon Merz writes vampires as well as anybody in the business, and this comes from a guy who's been writing vampires for a dozen years now. The Lawson Vampire series is straight-up old-school badass urban fantasy, with heroic heroes and nasty villains – everything you want in a novel. – John G. Hartness

Midnight found me skirting puddles from the earlier downpour as I crossed the Brookline Avenue bridge, over the traffic surging along the Massachusetts Turnpike. The night had blossomed into a crisp, clear sky with tendrils of rain clouds slinking to the North. My heated breath stained the air in front of my face as I dodged another pool of grimy water.

I love the darkness.

Most people are afraid of what they can't see. To me, the shadows hold the excitement, the risk, and even the danger I need in my life. I suppose I'd have to feel that way, given my occupation.

The last time he came to my theater of operations, he killed ten people. Of course, the cops had no clue. They never did. And the Feds? Well, if you knew how they operated, it was no mystery why they were as clueless as the local donut jockeys.

The Council didn't believe me. Not enough evidence, they said, dismissing the dozens of bodies Cosgrove littered the streets and alleys with. They told me to leave Cosgrove alone.

I disobeyed the order.

Not a smart move on my part. The Council acts as a government of sorts for us. They hand down the laws of our society. I work for them with McKinley operating as my Control. Albeit a crappy one. But even the respect I had for the Council didn't stop me from defying them.

I tried to take Cosgrove out. I almost succeeded.

And I almost died.

In this game, almost means about as much as two minus two.

Cosgrove vanished without a trace. I got a verbal warning for failure to follow orders.

That's called getting off lucky. On both counts.

Ahead of me, Landsdowne Street - Boston's nightclub Mecca - beckoned. And on a Friday night, it was packed with all sorts of people out to enjoy a night on the town. Most of them didn't realize how much danger was passing them by. Like the sharks that swam all around people at the beach. Just because you couldn't see them didn't mean they weren't there. It didn't mean they weren't just as deadly.

Especially when they were hungry.

Cosgrove may as well have been a poster child for Ethiopian famine.

His hunger for death rivaled only for his lust for blood. In the time I'd spent trying to track him down and waste his ass on a permanent basis, I'd learned a little something about him.

What made him different was an infusion of bad blood into his family line. His grandfather, lazy bastard that he was, chose targets of convenience rather than maintaining the dignity of the hunt. He lounged around insane asylums, morgues, anyplace where the dregs of society congregated. Where they were easy pickings.

Cosgrove's dad said Grandpop did it so no one would ever miss them. So they wouldn't know what had killed them. Cosgrove's father didn't want to believe the truth that Grandpop was just a miserable excuse for a hunter.

The mixture of blood he took in infected genes which were subsequently passed down to Cosgrove's father and Cosgrove himself. Cosgrove's father killed himself shortly after I paid him a visit to discuss his son's aberrant behavior.

But the infectious mix of lunacy swirling about Cosgrove's bloodstream mutated causing Cosgrove to kill with the same kind of zest a fourteen year old boy has when he discovers how to jerk-off. I'd seen Cosgrove's death lust first hand before. His behavior, at least according to McKinley and the Council, could no longer be tolerated.

And I'd been tolerating longer than most.

I made my way past the sausage vendors pedaling thick pieces of bloated meat by-products sizzling over the blue flame of sterno to drunken nightclubbers. I walked past the homeless veteran with the old Campbell's soup can held outstretched in front of him looking for salvation in the guise of another quarter. And eventually past the lines of limousines double and triple-parked in front of velvet cordons corralling long lines of supposedly beautiful people before herding them into the clubs.

I saw Simbik before he noticed me sidling through the five college girls attempting to bullshit him with fake ID's. The son of a wealthy Turkish importer who lived outside of Istanbul on a huge estate, Simbik didn't have to work for anyone. He could have spent his life mooching off dear ol' dad. He didn't. I respected that. Rumor was the big lug had a soft spot for animals and was putting himself through veterinary school.

He smiled immediately. "Who you pestering tonight, Lawson?"

I moved past the girls, who frowned and walked further down the street to try conning another doorman. I scanned the area again. "Just out for a walk."

Simbik smiled. "Sure, and I'm just standing here farting for my health." He shook his head. "I got a better chance of seeing Istanbul and Athens become sister cities, fuhgeddaboutit." He glanced up the street as more patrons arrived. "Who you looking for?"

For a recent immigrant to the States, Simbik's accent was thoroughly Brooklyn. He once told me he'd worked in a pizza joint in Bensonhurst before moving up to Boston. He learned part of his English drowning in tomato sauce, cheese and dough. He learned the other half wading through guys named Guido, Vinny, and Sal with his fists and an occasional headbutt. At six feet two inches and a shade under two hundred and a quarter, the few foes Simbik couldn't handle could be counted on the fingers of one hand.

I watched him examine some more ID's and wave through another group of clubgoers before responding. Simbik knew very little about me. But he knew some.

I looked at him, and he broke into a toothy grin. Simbik knew if I was looking for someone, they definitely weren't a candidate for sainthood.

I looked further down the street. "Don't know."

Simbik cocked one of his bushy eyebrows. "Great job you got, Lawson. If I wasn't so happy being a doorman here, rejecting little kids with bogus IDs and all, I might threaten to come aboard."

"What can I tell you - cosmetic surgery makes my life a bitch. No one's got a recent photo of him."

He nodded. "Figures." He adjusted the radio earpiece he wore. "So, how you gonna do it?"

"Hey, man, Landsdowne's a short street, but it's got eight clubs, thousands of people, and only four hours to check them all out. You ain't got that many eyes, my friend."

"Simbik, I'm a professional. I use cunning, experience, and a lot of good detailed information."

His left eyebrow arched higher on his forehead.

I shrugged. "All right, so you're the only friend I've got down here. Your place is as good as any to start with, y'know?"

"Yeah." Simbik lit an unfiltered cigarette and took a long drag, expelling a thin stream of smoke into the night air. "Always knew my number would come up someday."

"Thanks." I started inside but Simbik stopped me.

I looked at him.

He blew more smoke into the night air. "You sure he'll be inside?"

"You find him in there, what happens?"

He regarded me for a moment. "Can you whack him quietly? I got a job here and all."

"Simbik, if I find this guy in your club, I'll kill him any damned way I can. You'll thank me for it a million times and then buy me all the Bombay Sapphire I can drink."

"No." I shook my head. "He's even worse." I ducked under the blue velvet curtain and vanished into the shadowy recesses of the club.