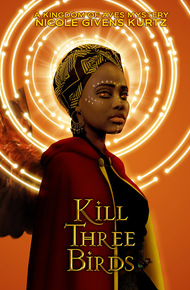 Nicole Givens Kurtz is an author, editor, and educator. She's the recipient of the Ladies of Horror Grant (2021), the Horror Writers Association's Diversity Grant (2020) and the Atomacon Palmetto Scribe Award-Best Short Story 2021. She's been named as one of Book Riot's 6 Best Black Indie SFF Writers. She's also the editor of the groundbreaking anthology, SLAY: Stories of the Vampire Noire. Her novels have been a finalist in the Dream Realm Awards, Fresh Voices, and EPPIE Awards for science fiction. She's written for White Wolf, Bram Stoker Finalist in Horror Anthology, Sycorax's Daughters, and The Realm's The Vela: Salvation series. Nicole has over 40 short stories published as well as numerous novels and three active speculative mystery series. She's a member of Horror Writers Association, Sisters in Crime, and Science Fiction Writers of America. You can support her work via Patreon and find more about her at http://www.nicolegivenskurtz.net

Sent to investigate a strange murder in a quiet remote egg, can Hawk Tasifa find the killer before she becomes the next target?

Prentice Tasifa is an investigative hawk whose been deployed from The Order to the small egg of Gould, a mountain village. A missing girl had been found dead. Hawks investigate strange and difficult situations throughout the kingdom of Aves. They can "see the unseen," by accessing a unique ability to activate hawk-like vision, a trait they carry through their bloodlines.

When Prentice arrives in Gould, she soon discovers that there isn't just one bird dead, but three. Has the hidden town's secrets contributed to the deaths? Did the victim's controversial relationship?

There's a serial killer operating in little known Gould, and she has to find the person before she ends up next.

"You wanna see what a killer looks like? Look in the reflecting glass," Prentice Tasifa said over her shoulder. Her voice rose above the evening's insects chittering. Not getting a reply, she stood up and looked over to Dove Balthazar. "Anyone is capable of killing."

"Those who are with the goddess, and follow along her path, don't slaughter others," Dove Balthazar said, with a sweeping arm across the bloodied body between him and Prentice. The white, gold-trimmed sleeves of his cloak just missed the carnage. "Hawk Prentice, try to remember how this woman lived. Holy. Pure."

Prentice pinched the bridge of her nose and sighed. Balthazar, like most in the rural egg, was about to discover the true nature of human beings. Anyone was capable of great violence when dumped in the right situation. Doves like him only saw goodness in people. That was their role.

She put her attention back on the body. Despite the velvety darkness enveloping the site, Prentice used her skill to observe what most people missed. This wasn't a homicidal rage.

The body was covered in blood, but Prentice could tell she'd been hit with a blunt object. Her hands bore defensive wounds. A pit tightened in the bottom of the hawk's stomach.

"Do you want to talk about the skeletal remains found over there in the woods? We can wait on that one. Tomorrow will be soon enough." Prentice watched his face.

Balthazar paused, his index finger pointed at Prentice's chest. Her scarlet cloak, dark dress cinched at the waist and crossed with a leather gun belt that contained her talons, covered her entire body. The guns shot silver bullets infused with fairy dust for penetration. Boots and her utility belt completed her look.

"There's no rush. There's a depression in the grass. The trail has gone cold, anyway. Body's been there a while." Prentice shook her head. She stepped back from the current corpse, moving to the trail that snaked through the woods behind the church. Like most eggs, this one had a centralized location to worship. "The two men, suspects, who came here."

"Two men? How do you know they were men?" Balthazar followed her to the worn path, his white cloak grabbing leaves and other ground debris in his wake.

Prentice took out a cigarette, hand-rolled with tobacco. She snapped her fingers, sparking a small flame. She touched the cigarette's tip and inhaled deep and long. When she exhaled the stream of purple smoke through her nostrils, Balthazar scowled.

"Answer me, Hawk Tasifa." He coughed. "Can you stop smoking?"

"No, you can't stop or no, you can't answer me?" Balthazar's thick eyebrows rose in question. He removed his hat, decorated in white and gold. Doves wore them. "We requested, I requested, help from the Order. We have a real situation here. Some of my nesters are dead. The eagles have no idea what's going on."

Prentice sighed. "Yeah, and the Cardinal sent me, the hawk. Let me work. The smell of blood is disturbing and turns my stomach. I'm not a condor, okay?" She didn't want to explain to him that smoking kept her from puking at death scenes. Yet underneath the putrid odor, something else surfaced. It hinted strongly of earth magic tinged with something black.

"How did you know about the skeletal remains? We searched the grounds after we found Gretchen…"

"Hawks see the unseen." Prentice pointed to her hazel eyes, wide and large, stretched from the bridge of her nose out toward her temples. From a young age, hawks' appearance unsettled others. She had spent a lot of her childhood in the nyumbani with her family. Her male siblings went out, to school, to work. Home-schooled by the rooks, Prentice and her sisters worked hard on their studies.

She adjusted her headscarf and sighed.

In her role, she saw what ordinary people missed. She'd been born with this gift. As a descendant of hawks, her mother worked for the Order. Trained as the investigative arm of the Order, hawks were dispatched to see what others could not. Now, here she stood, in the remote Gould Egg, a small community of three-to-five hundred people. A scenic gem situated on four thousand acres of sprawling woodland.

"We have a real problem here. Someone is using your woods as a dumping ground." Prentice rubbed her right temple. She dropped the cigarette and ground it out with the toe of her boot.

Balthazar threw up his hands. "Obviously. Who? You mentioned two men."

Prentice peered across the grassy swatch of land. Her eyes widened, growing and allowing in the unseen. Her wings broke free through the slits in her robe, lifting her from the ground. She'd done an aerial sweep before, but only a cursory look around. This time she meant to see everything. A significant amount of blood had been spilled on this U-shaped patch of land in the center of the woods behind the church. It splattered everywhere.

Prentice hated her abilities sometimes. There'd been no evidence to suggest there had been more killings, but Prentice could tell someone had been using this recreational section to dump bodies.

As she soared, she searched for disturbances in the soil or newly dug graves using her ability to see through the pitch-black night. She spied the heap of what looked like a burned corpse, the eviscerated body left in ashes. The hint of burnt flesh hit her nose making her gag. She spied tiny bits of bone and teeth buried in the ashes. Someone would've seen the blaze, and nothing around the body itself showed charring. It could've been dumped here and scattered, but who had the time? She could see Balthazar's confused and frustrated face as she flew over him. He wanted a fast answer and resolution. She didn't blame him. Killing frightened people.

When she landed beside him, she stumbled and grabbed his shoulder to steady herself.

"Sorry." She pushed herself to a standing position. Her stomach ached and her vision narrowed, growing more limited until all she could make out were shadows.

"Are you all right?" Balthazar touched her shoulder. "We need to get you back to the church."

Prentice nodded. "Yes. We can speak more there."

She made out that Balthazar had nodded and gestured to the carriage driver. The dove started for the carriage, and she followed, her hands out in front of her to keep her from walking into him or anything else.

"Here, let me help." Balthazar took her hands in his, and helped her climb into the back of the carriage.

Once inside, she ran her hands over the hard leather seats. The door's creak and then clattering told her it had been secured. Balthazar's girth rocked the carriage back a bit. In minutes, they lunged awkwardly forward through the woods along the worn path.

His quiet presence loomed in the small carriage. She could almost feel his questions. Indeed, she got them every time the Order dispatched her to another egg. The doves all had the same nosy inquiries.

"It's stuffy in here," Balthazar said at last.

Prentice heard the creaking of the window as he rolled it down.

"Yes, that is what makes your kind so invaluable to the Order."

"…but what many do not know, is that using the ability costs me some of my own natural sight."

"What do you mean?" Concern crept into Balthazar's tone, coupled with surprise.

"Each time I use my abilities, I am limiting my own sight. Eventually, I will be blind."

He gasped. "By the goddess! Is it so for every hawk?"

"It is." Prentice thought of her mother, very much alive in her later years, except she could no longer see. The Order retired her forthwith, and she spent the rest of her days in the cottage with her family. She could no longer see with her eyes, but her other senses more than made up for it. For her mother, her hearing became excellent and she worked at the church as an organist. She had a great ear.

"Sacrifice is in the blood."