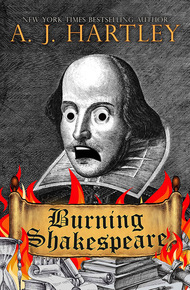 A.J. Hartley (AKA Andrew Hart) is the bestselling author of 24 novels in a variety of genres including mystery, fantasy, sci-fi, thriller, paranormal, children's and young adult. He has written adaptations of Hamlet and Macbeth with David Hewson, and UFO mystery/thrillers with Tom DeLonge of Blink 182.

As Andrew James Hartley he is UNC Charlotte's Robinson Professor of Shakespeare studies where he specializes in performance issues. He is the author of scholarly books on dramaturgy, political theatre and performance history.

He has edited collections about Shakespeare on the university stage, Shakespeare in millennial fiction, and (with Peter Holland) Shakespeare and geek culture. He was editor of Shakespeare Bulletin for a decade, and is currently working on Julius Caesar for Arden.

He also has a YouTube channel focused mainly on Japanese rock music. You can learn more about him at www.ajhartley.net

How would the world look without the influence of Shakespeare pervading so many aspects of life and culture and belief?

In a race against time, with the fate of lives and souls hanging in the balance, the forces of good and evil battle to save or destroy Shakespeare's works. Which side works to which end? That is the question, isn't it?

Would we be better off without Romeo and Juliet, Hamlet, Othello, and the others, or would the safety valve that theatrical expression provides back up into an explosion of apocalyptic proportions? Follow the cast of this tale—from university student to petty thief to talk show host—as they travel through time and space in Burning Shakespeare.

A.J. Hartley is one of the foremost experts on Shakespearean performance in the world today, as well as being a multiple time NY Times best seller and collaborator with rock stars. What many people may not know is that under his very educated and often proper English exterior is a soul of hilarity. Burning Shakespeare blends his love of Shakespeare with his fandom of the late, great Terry Pratchett into a delightful book that I was thrilled to bring into this collection. – John G. Hartness

"The villainy you teach me I will execute,

and it shall go hard but I will better the instruction."

Consider this man climbing the wooden stairs to his bed chamber. He is white, neither old nor young, clad in the fashion of his day, the colors muted but the cut stylish, and the whole a little more than he can realistically afford. As he walks, he frees himself of his doublet and peels off the sleeves one at a time, careful to keep the fabric away from the candle flame. Under the doublet is a smock shirt with loose unadorned sleeves stained with spots of black on the right cuff. Ink, perhaps.

A writer then, though whether that makes him a secretary, a lawyer, or something else entirely is not immediately apparent.

His beard and moustache are neatly trimmed, and he wears a pair of simple gold earrings, which make him look quite dashing, though his hair line is receding fast. In another year or so he will be quite bald on top, and he looks older than his thirty-seven years. Weariness comes off him like smoke from a banked fire, and his dark eyes are fathomless.

In his room he clambers out of his remaining clothes and considers the manuscript pages bound with ribbon on the deal table beside the low-slung bed, the only furniture in the tiny, erratically angled room. Wind thrums the thatched roof above him and, for a moment, he reflects upon the sound, wondering how to phrase it. For a long moment in which he might almost be asleep already, he sits quite still, poised to reach for the pen. He blinks, as if leaving a trance, and considers the guttering candle before, with palpable reluctance, blowing it out, and collapsing onto the stuffed, uneven mattress. Even in the dark, which is utter, the kind of darkness subsequent periods generally find only far away from human settlement, his eyes sparkle black. Despite his tiredness he lies awake for several minutes as if waiting for something to happen.

The eyes close at last and then, in almost the same instant, another pair open. They belong to something at the foot of the bed, something visible only as a deeper hollow in the darkness. They glitter with malice like the eyes of a predatory beast, but the rest of the body is strangely inconstant. It shifts like smoke or the currents of deep, black water, eddying and rippling, a swirling chaos seeking shape as something not yet fully formed. It exudes malice, a wild and aimless impulse to violence and destruction, a need to devour, to violate, to undermine whatever is good and true, whatever might bring joy. It is an appetite, voracious and insatiable, but—as if already gorged and stuffed—it wants to spew hatred, to sew discord like poisonous wheat. It swirls and seethes, surging, snatching, clawing for what will give it the form to walk abroad…

On the bed, the writer starts from his sleep and sits up. As his eyes snap open, the creature perched gargoyle-like at the foot of his bed vanishes into nothing.