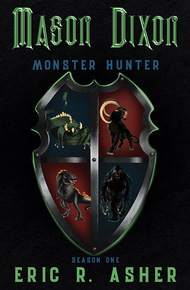 Eric is a former bookseller, cellist, and comic seller currently living in Saint Louis, Missouri. A lifelong enthusiast of books, music, toys, and games, he discovered a love for the written word after being dragged to the library by his parents at a young age. When he is not writing, you can usually find him reading, gaming, or buried beneath a small avalanche of Transformers. For more about Eric, see: www.ericrasher.com

He's a YouTube sensation, making hilarious videos about hunting down monsters in the wilds of Missouri that are too outlandish to be real. Besides, everybody knows things like gowrows, Momo, and jimplicutes are just tall tales told to scare children.

Follow Mason Dixon, his sidekick Emma, and their tech guru Himari as they wander the woods of the Midwest looking for the monster that killed Mason's brother while working hard to protect the other cryptids from encroaching humans. And sometimes protecting the encroaching humans from the cryptids, too! This hilarious horror comedy series is part of the expanded Bubba the Monster Hunter Universe created by John G. Hartness and populated by Hunters like Mark Wojcik, Jess Friedman, and Caitlin Kelley.

When I decided to open up my Bubba the Monster Hunter universe to other writers, the first two people invited were Gail Martin and Eric Asher. Authors I knew and respected, with great comedic writing chops, cut loose in a world where they can feel free to come up with the wildest cryptids to ever be seen in folklore. There are dinosaurs and carp fights – what more could you want? – John G. Hartness

Christ Mason," Dylan said, interrupting his own muttered curses. "I haven't had this much mud in my boots since the flood."

"Which one?" I asked, glancing back at him. Missouri wasn't exactly what you'd refer to as a dry state.

Dylan tugged at his leg a few times before it came loose with a sucking pop. He wiped away the short mop of soaking wet blond hair that had fallen into his eyes.

A string of curses exploded from Dylan that would've made my grandma blush, and that's no small thing.

"One time," he said. "It happened one damn time when we were still in college. Will you ever let that go?"

"You want to go stay in town?" I asked, stepping quickly around another mud hole. "It seems like a pretty warm and inviting place. Pretty sure every street corner is haunted, but other than that it's great."

"Shut up. Louisiana, Missouri was creepy as hell."

I grinned and pulled myself up higher on the hill. The underbrush and canopy kept the ground drier here in most areas, and I was relieved when we didn't get stuck so easily. We walked for another thirty minutes before we heard the scream the locals had told us about. It started low and rose into a high-pitched screech, raising goosebumps on my arm as it broke into a stuttering series of barks.

Dylan nodded quickly. "Say something. We can edit it later."

"Mason Dixon here," I said softly, looking down at the camera and gesturing to the forest around us. "We're in the woods. We haven't traveled more than a few miles into the trees outside Louisiana, Missouri. You could almost mistake that cry for a big cat, but I tell you now it's not a cat. Oh no, it's bigger and harder to find than any mountain lion, cougar, or panther the locals talk about."

Something cracked deep in the woods, and I tilted my head to focus on the sound. When nothing else followed it, I turned back to the camera.

"Want to know what I think? It's Momo. Yes, I think that cry is, in fact, the Missouri Monster. Now, some folks think it's a sasquatch with a pumpkin-shaped skull, but me?" I shook my head. "I think it's something else. It's a rare sasquatch to reach nine feet tall, and we've spoken to witnesses that put Momo closer to ten feet tall!"

Dylan made a gesture in an effort to quiet me down a bit. Sometimes the excitement got to me.

"That was great!" Dylan said. "This is going to be our best episode of Cryptid Hunter yet. I think you should play it up more. Talk with your hands, you know?"

I gave him a smile. "You bet. We almost hit fifty views on the last one, and that was our best yet."

"I'm telling you, that video of the kingdoodle should've gone viral."

"It was a big lizard," I said. "No doubt there. But who names these things?"

"Please," Dylan said. "If you're hunting cryptids in Missouri, you better be used to stupid names. But the kingdoodle … that was amazing, Mason. I'm telling you, special effects are ruining our profession."

I grinned at Dylan. "Well, look at how many hoaxes are out there. You can kind of understand people not believing they're looking at a three-foot-tall lizard some eight feet in length. We could have screwed with the perspective without needing special effects."

Dylan sighed. "I know, I know. Let's just find out what's here and stop worrying about all the hoaxers."

Lightning flashed in the distance, enough to cast jagged shadows through the woods and make every shifting branch look like a deadly threat. Thunder crashed a moment later, and the grating cries echoed around us again.

A brighter, wider beam of light ignited behind me, and I froze. Dylan bumped into me with the camera and cursed. Rain trickled through the canopy of falling leaves, creating a cacophony of sound that would mask a great many things.

I pointed at the soggy earth as he stepped up beside me. "Tracks."

Three toes and what looked like a fourth arching out from the side of the print branched from the deep indentation. I crouched down and pulled off the leaves covering part of it.

I shook my head. "It's far too long to be a bear." I frowned, trying to tell if there was any hair or fur, but it was hopeless in what light we had.

"Take a few steps back," Dylan said, "so we can record you finding it."

I pursed my lips and then stood up, following our own short trail backwards through the underbrush.

Dylan pointed the camera at me again, and I slipped easily into the personality of the host for the show. It may have been my sudden need to escape the awful stench setting my nostrils on fire.

"We're so close now we can smell it!" I said, shaking my head quickly as I spoke. "And it smells terrible. Like a … like a skunk run straight through a tire fire." I shivered in over-animated disgust before gesturing for the viewers to follow. "Come on."

Thunder and lightning crashed again, and I could have sworn the trunk of a tree moved. All I had with me was my grandfather's tranquilizer gun he used to shoot bobcats with. He never wanted to kill them, even when they came for his chickens. I left the gun in its holster, but my eyes stayed locked on the shadows for another few seconds.

"Go on Mason," Dylan said, prodding me to get back to work.

"Look there!" I said, almost prancing around the footprint I knew to be just ahead of us. I pulled out a butterfly knife that unfolded into a wicked-looking sawblade with a ruler along the back. I carefully used it to move some leaves away from the print before holding the ruler up and leaning back.

"Look at that now. Ten inches on my knife here from tip to base, and that foot's at least twice as long." I put my finger at the end of the blade and then shifted it over to make my point. "We have three toes, and that's a lot like other bigfoot sightings, but look at the toe coming off the side. Don't think I've seen that before, except on Missouri Monster sightings. And we all know there haven't been many of those.

"What's that?" I said, cocking my head to the side. "Some of you haven't heard of Momo? Short for the Missouri Monster?" I went through a quick spiel about the earliest sightings of our very own sasquatch in Missouri. Of course, some folks—including me—thought it was something else, something darker with a pumpkin-shaped head that liked to eat dogs. And possibly kids.

Dylan's eyes widened behind the camera. "Something behind you," he hissed. Lightning flashed, and whatever had been behind me was no longer my concern. A giant's silhouette loomed behind Dylan, easily mistaken for a tree but for the way it slowly closed the distance.

"Run!" I shouted, but it was too late for a warning. The shadow behind Dylan snapped forward, pulling him backwards briefly before hurling him away. Dylan crashed to the earth, tumbling deeper into the woods with a cry. I fumbled at the snap to my holster and finally managed to raise the tranquilizer gun.

Something wide and furry and thick as a log smacked down across my arms, sending me into the mud. I heard Dylan scrabbling nearby as heavy footsteps rushed toward us, squelching in the soaked earth and leaves before a horrible, hollow thump echoed through the woods. But those footsteps had sounded behind me. Then what the hell had been in front of …

A flash. Only a glimpse showed me the soiled flesh before it struck out at me. I thought I was dead, but again that furry log pushed me to the ground, and then it roared. The bellowing sound threatened to burst my eardrums, and the sheer bass of it vibrated my body.

The light mounted on the camera rolled across the muddy path, and I fell backwards staring up at the shaggy fur-covered head. It had to be seven feet tall if it was an inch, carrying a smaller furry form under its arm. The creature held its hand out to me, as if it was telling me to stay put. Then it gave chase, pursuing the thing with fur so black it seemed to be eating every bit of light.

It leapt over Dylan, and I could have sworn it was chasing a shadow, something that had no right to be lithe. It moved like the crack of a whip.

"Dylan! Dylan! Did you see that!" I said, running over to him. My racing heart stammered when my eyes locked onto Dylan's. He stared blankly at the forest canopy, his blood-coated face and grotesquely twisted neck lit by the cold white light.

The sickening hollow crack on the tree. It had been Dylan. I didn't need to feel the displaced vertebrae in his neck or the lack of pulse beneath my shaking bloody fingers to know, but I checked anyway.

And the monsters' howls tore through the night.