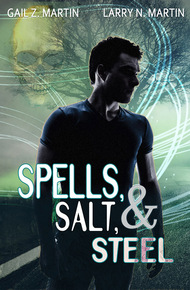 Larry N. Martin writes and co-authors science fiction, steampunk, and urban fantasy for Solaris Books, Falstaff Books and SOL Publishing. His newest book is The Splintered Crown, a portal gaming fantasy. He also is the author of Salvage Rat, the first in a new space opera series.

Together Gail and Larry co-author the steampunk series Iron and Blood: The Jake Desmet Adventures and a series of related short stories: The Storm & Fury Adventures. Also check out the snarky monster hunter series Spells, Salt, and Steel set in the New Templar Knights universe, the first novella in the post-apocalyptic series Wasteland Marshals, and Cauldron, the first in the Joe Mack Shadow Council Files.

You can learn more about Gail and Larry at GailZMartin.com or LarryNMartin.com, join their Facebook street team The Shadow Alliance, or sign up for their newsletter at http://eepurl.com/dd5XLj.

"When all else fails, the ass end of a carp makes a damn fine weapon."

By day, Mark Wojcik can be found elbow-deep in engine grease, making cars and trucks safe for the highway. By night, he can be found traipsing through the wilds of Pennsylvania, making the world safe for humans. He's more than just a mechanic, he's a New Templar Knight. He travels the backroads and byways fighting weresquonks, ningen, selkies, ghosts, and…gnomes? Is that gnome…naked? (sigh).

When all else fails, the ass end of a carp makes a damn fine weapon.

I'd been lying in wait for the ningen to show up, and by the wee hours of the morning, I was tired and cranky and out of coffee. As soon as the sun went down, I pulled in to the Linesville, Pennsylvania, spillway. The tourists were gone, and the concession stand's gates were closed. Still blows my mind how many people will come look at a bunch of fish. Even if those fish are a boiling, writhing mass of three-foot long, twenty-pound carp that look like something out of a Biblical plague.

I'm Mark Wojcik, mechanic—and monster hunter. I gank things that go bump in the night so that most people never have to know supernatural uglies exist outside of bad horror movies. No one chooses this life; it chooses you, usually in a violent and awful way. In my case, a deer hunt turned into a wendigo hunting us. I survived—barely—but my father, brother, uncle, and cousin didn't. Neither did the wendigo, when I was done with it.

The carp weren't my problem. Tourists loved throwing day-old bread into the water to watch the carp roil over each other, mouths gaping. Tonight, they weren't the only ones with an unnatural interest in big fish.

A corpse-pale creature balanced on the low concrete rim of the spillway catch basin. It stood about five feet tall, slender with long arms, and a body that looked like a giant white tadpole with arms and skinny, short legs. Ningen can get as big as sixty feet, or so the cryptid sites say, but then again, they say that ningen are only found in Japan, so I don't put much stock in them.

"Koko ni sakana no kao ga kuru," I called to it, betting that a Japanese monster might understand Japanese. Then again, I'd looked up key phrases on Google Translate, so God only knows what I actually said. "Come here, fish face," I repeated in English, in case the ningen was bilingual.

The ningen cocked its round head and blinked its solid black eyes. I leaned over the railing and waved my bait at it, a nice piece of salmon I'd paid fifteen bucks for at the supermarket, thinking the creature might want an upgrade.

"That's it," I coaxed, dangling the prime wild salmon and giving it a shake. "That's a good little sekana no neko." That's the magic of translation: "fish fucker" sounds classier in a foreign language.

If the ningen felt offended, it didn't look it, although for all I knew, maybe I'd been descriptive instead of insulting. The ningen raised its head and opened its mouth, scenting the air. It shuffled toward me on its stubby legs, like it had its pants down around its knees. I grinned, keeping the sharpened iron harpoon blade concealed behind my back in my right hand.

At the speed the ningen hop-walked, it might take it ten minutes to get to me, but once I ganked him, I'd be back home relaxing with a nice cold beer.

I lost the piece of fish, but managed to keep the harpoon. When I fell in, fully-clothed and in my steel-toe boots, I thought I'd sink, but I fell onto the roiling carp that made a moving, lumpy net beneath me. They buoyed me along just long enough for me to regain my wits and scramble onto the small stretch of rocky shore between the overflow basin and the wall below the fence.

The ningen crouched, eyeing me as it shoved the raw salmon into its mouth, and I got a look at its jagged, sharp teeth—something else the cryptid reports had been less than accurate about. I realized then that the small strip of land around me was covered with fish bones. Those all-black eyes kept staring at me, and although I'd heard long pig tasted like chicken, this jagoff looked like he was wondering how much I'd taste like fish.

It sprang for me, and I rolled, gritting my teeth as the sharp stones and fish bones jabbed through my jacket and jeans. I brought up my harpoon gun and got off a shot. The barbed iron blade hit the ningen in the shoulder instead of the chest like I'd hoped, but it must have hurt like a mother since the thing let out an ungodly howl that would have put any loon to shame.

I yanked on the rope attached to the base of the blade with all my might. The ningen stumbled toward me. Then it grabbed the rope and pulled. And I found myself face down in the water, getting smacked in the head by carp the size of toddlers.

I scrambled back onto the rocky bank. What little I could find about ningen, that was written in English, said it would have less power on land. I yanked the rope again, getting angry now, and the ningen bared its barracuda teeth at me and gave another ear-splitting shriek.

The iron had an effect on it; I could see black veins radiating from where the blade lodged in its shoulder, spreading across the once-perfect white skin. I just didn't know how long the iron blade would take to kill the creature, or if it would do the job completely. My gun was safe and dry in my truck, since I'd figured going for a forced swim was likely. But I had a couple more tricks up my soggy sleeves.

The ningen closed in on me, and I grabbed a kada, one of those martial arts sickle blades, from a scabbard on my back. I didn't know if Japanese weapons were extra-lethal on Japanese monsters, but I fully intended to go ninja on its ass for leaving me soggy and freezing and smelling like carp.

"Let's see you shi'ne, you piece of fish shit," I muttered. I watched as much anime as my Crunchy Roll subscription could handle, and I'd picked up on a few overused phrases. "Die" seemed like a good one.

Except that the ningen didn't seem to take it the way I'd intended and jerked me back into the water.

I managed to roll so I got the kada blade between us and swung as hard as I could, sinking the point of the curved blade into its chest where I hoped its heart might be. The black veins from the iron blade had spread across its entire torso, up its fish-belly white neck, and down its overly long arms.

But it wasn't dead yet, and it came at me again, forcing me to fall backward in the water into another mass of carp. I kicked with my legs to get some distance between myself and the ningen. The carp weren't pleased to have me land on them, and one of the fish jumped out of the water and landed in my arms, all thirty pounds of him.

Instinct took over, and I wrapped both arms around the carp's middle and thrust its powerful tail toward the ningen. The fish wriggled wildly in my grip, its tail slapping back and forth with sharp scales and fins. It knocked the harpoon deeper into the ningen's chest, as the black lacework of the iron's poison spread across the rest of its skin.

I got my feet under me and dragged myself onto the shore, still holding a pissed-off carp between me and the monster. The ningen lurched forward, grabbing for me with its long, skeletal arms and clammy, dead white hands. Then it fell over and lay face-down amid the carp, completely covered by the deadly pattern of the iron's taint running through its veins.

"Tora, tora, tora that, fish fucker," I muttered. I dropped the carp, and it disappeared into the roiling mass of its companions.

I hauled myself back up on the rocky shore and caught my breath. The night was warm, but that's a relative statement in this neck of Northwestern Pennsylvania, and I started to shiver. The ningen lay where it fell, and I was just about to pull it out of the water when I saw its body twitch.

"Oh, no you don't!" I growled, but before I could climb up the wall to get my gun out of the truck, the carp began to thrash. My stomach turned as I realized that the ningen wasn't moving on its own; its body jerked and moved because dozens of carp were nibbling at its flesh.

In the next moment, the ningen's form sank lower, pulled down by the fish. The pale body vanished beneath the water, and the fish fought each other to get closer, obscuring it from view.

"Hey buddy! No fishing!" I turned and got a face full of flashlight beam, blinding me. The perfect end to a lousy evening would be getting arrested for monstercide. Or in this case, fishing without a license.

I blinked and recognized a familiar voice. Louie Marino, a guy I'd known since first grade, and one of Linesville's Finest.

"Not fishing, Louie. Honest. Just business." Louie's one of the few area cops who know what I really do. He gets it—mainly because when he had a nasty little infestation of demon-possessed rabid raccoons a few years back, I took care of it for him, no questions asked.

"Keeping busy?" he asked, angling the flashlight so I could see again.

"Always. They pay you enough to be on fish patrol at this hour?"

Louie shrugged. "Workin' nights this week. Drew the short straw. Just another day in paradise." He wrinkled his nose. "You stink like carp."

"I've heard of 'swimming with the fishes,' just didn't intend to take it literally," I replied, wringing out the water from the hem of my flannel shirt.

I shook my head. "Probably not. If the rangers at the Spillway say anything about their fish count being down, tell them it's been taken care of."

Louis grinned, taking in my utterly disreputable condition. "You're just lucky I was on duty tonight, or you'd be going from the fish tank to the drunk tank."

"Ha, ha. Very funny," I mumbled, although I knew he was right. "Oh, and Louie?" I said as we headed back to our vehicles. "If I were you, I wouldn't eat any carp out of the lake this season. I think their diet's been a little…off."