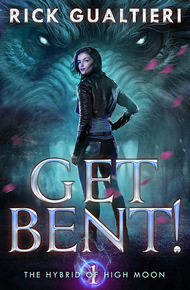 Rick Gualtieri is a multi-genre author who loves to write adventure, mayhem, and snarky dialogue. His multiple bestselling series combine all of this into an unholy stew of supernatural danger, bone-breaking action, and plenty of sharp-tongued geeky humor.

Rick lives alone in a dark, evil place called New Jersey with only his wife, three kids, and countless pets to both keep him company and constantly plot against him. When he's not busy monkey-clicking out words, he can typically be found either playing Dungeons & Dragons, losing at video games, or jealously guarding his collection of vintage Transformers from all who would seek to defile them.

Get Bent! by Rick Gualtieri

BORN OF SUPERNATURAL MONSTERS. HUNTED BY HER ENEMIES. READY TO KICK ASS.

Secrets are hard to keep in a town like High Moon, especially the one hanging over Tamara Bentley's head like the sword of Damocles. Her mother's a witch and her father's a werewolf. The blood of two ancient races flows through her veins. Pity that they hate each other's guts.

When the leader of the wolf pack finds out what she is, he decides she's an abomination that needs to die – even if it means slaughtering everyone who gets in his way. Too bad for him she's not willing to go down without a fight.

His army of werewolves is terrifying enough, but now they're about to become even more powerful thanks to a rare lunar event. Tamara will need to call upon every last ounce of her strength if she wants to survive the night, protect her home, and stop the rampage before it carves a bloody path through everything she's ever cared about.

It seemed that Riva wasn't too terrified to pick perhaps the stupidest time of all to start asking questions.

"I have a confession to make," I said as the circle of werewolves closed in on us. "I'm actually descended from a long line of monster hunters."

I stopped and glanced at her sidelong, giving her my best condescending glare. "No."

The werewolf I'd thrown untangled itself from the one I'd helpfully tossed it into and got back to its feet. Fine by me. That wasn't the only move I had. Too bad it wasn't alone. Pity that wrestling, outside of the stuff they showed on TV, was a one-on-one sport. Contrary to what some might think, I hadn't spent much time training for battles royale ... or fighting monsters, for that matter.

Where the others seemed to be approaching us more cautiously now, the one I'd tossed looked pissed. It lowered its head and appeared ready to charge.

Another of those things, somewhere near the rear of the pack, let out a godawful roar – loud enough to rattle my bones. I expected the entire bunch to converge on us because if that wasn't a battle cry, then I didn't know what was.

However, the one getting ready to kick my ass stood down instead. It relaxed its body stance and backed up. The hell? Several more of the monsters stepped to the side revealing two massive werewolves, even larger than the one I'd thrown.

Holy shit! It was like these things came in large, extra-large, and fucking enormous.

"I think you pissed them off," Riva whispered, her voice sounding close to breaking.

Both beasts approached us, each well over seven feet tall. Their fur was jet black in color, mixed with hints of salt and pepper grey. Everything about them was even more exaggerated than the rest – bigger teeth, longer claws, far more terrifying, that sort of stuff. We'd just learned these monsters existed and already were meeting their jacked-up cousins.

Could this night get any weirder?

One of the uber-wolves stepped forward and growled at the one I'd tossed. They made chuffing sounds back and forth at each other. Mind-blowing as it was, it seemed like they were actually conversing. That told me these things were probably intelligent, but I couldn't help but feel that still didn't bode well for us. Somehow I doubted we'd be able to talk our way out of this.

After a few seconds, the smaller beast stepped away and approached the downed werewolf. It bent low and began to sniff it, occasionally prodding it with its nose, all while the bigger wolf looked on.

It wasn't just the big guy either. All of them were intently staring at the one still lying unconscious on the ground.

It was now or never, while they were all otherwise occupied. This was the only chance Riva was going to get to...

A low whimpering began to come from the one with a broken arm. It was finally waking up. Great. As if we didn't have enough of these things to worry about.

The words died in my mouth as one of the wolves turned toward the big one – the pack leader perhaps – and made a sound that was actually understandable, if just barely.

That was the truth. Its voice had been low and guttural, uttered by a mouth that didn't appear designed for human speech. For all I knew, it could have just come out sounding familiar, like how some dogs could be taught to bark Christmas carols.

Either way, an answer didn't seem to be forthcoming. Several of the wolves converged on the beaten one and began gently helping it up. It appeared they were showing actual concern. If so, then maybe there was a shot they'd be too worried about their friend to notice us slipping away.

Unfortunately, we were very much still on their radar, though. My friend's sharp intake of breath from behind alerted me to the fact that the second of the two mega-wolves was approaching us.

There was an air of authority in its gait that the rest didn't seem to have. The other big werewolf appeared to be giving the orders, but the way this one carried itself told me it must have had some substantial rank within the wolf hierarchy – High Lord Ass Sniffer, at the very least.

I lifted my head, hoping to maybe stare the creature down, but then saw its eyes widen almost as if in surprise. It was by far the least aggressive thing I'd seen any of these monsters do so far. I hate to admit it, but if it had tilted its head to the side like a dumb dog, I probably would have laughed.

The massive beast continued to approach until it stood directly before me, casting me in shadow by virtue of its size alone.

"I've got this," I said without breaking my gaze.

The wolf glared down at me and gave a sniff. Then it looked back, toward where the others were still helping the one I'd beaten the snot out of.

It did this a few times, looking back and forth between us, as if contemplating what had happened. It was a very human-looking gesture for something so utterly alien.

As curious as I was to where this might be going, I also realized there likely wouldn't be a better time to make a move.

The wolf glanced back toward the others one last time and I picked that moment to act. I wasn't sure what sex this thing was, having not properly studied its wolf crotch, but I'd watched enough Animal Planet to know that packs were generally led by males. That was good enough for me.

I brought my foot up with everything I had and its eyes opened comically wide at the moment of impact. It let out a whimper that was unmistakably that of a male whose testicles had been flattened by a size six.

The werewolf fell over onto its back, its hands, or paws, grasping at its groin.

I opened my mouth to scream for Riva to run when the other big wolf let out a roar.

This time, there was no mistaking the meaning. It was aimed squarely at us, and it sounded angry.