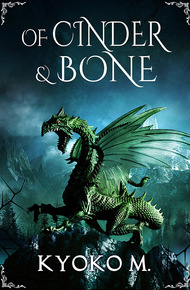 Kyoko M is a USA Today bestselling author and a fangirl. She is the author of The Black Parade urban fantasy series and the Of Cinder and Bone science-fiction series. The Black Parade has been reviewed by Publishers Weekly and New York Times bestselling author Ilona Andrews. Of Cinder and Bone placed in the Top 30 Books in Hugh Howey's 2021 Self Published Science Fiction Contest. Kyoko M has appeared as a guest and panelist at such conventions as Geek Girl Con, DragonCon, Blacktasticon, Momocon, and Multiverse Con. She is also a contributor to Marvel Comics' Black Panther: Tales of Wakanda (2021) anthology. She has a Bachelor of Arts in English Lit degree from the University of Georgia.

Of Cinder and Bone by Kyoko M.

After centuries of being the most dangerous predators on the planet, dragons were hunted to extinction. That is, until Dr. Rhett "Jack" Jackson and Dr. Kamala Anjali cracked the code to bring them back. Through their research at MIT, they resurrected the first dragon anyone has seen alive since the 15th century.

Caught between two ruthless yakuza clans who want to clone the dragon, Jack and Kamala brave the dangerous streets of Tokyo to steal their dragon back in a race against time before the world is taken over by mutated, bloodthirsty monsters that will raze it to ashes.

Jack raised his gun as a man came around the front of the truck and opened fire with a roar, emptying the clip into the man's chest. The yakuza crumpled to the road in a heap. Another one stepped out from behind him and raised his AR-15, his finger closing on the trigger.

And then the dragon dropped out of the sky right on top of him.

Pete slammed the man to the ground with her clawed feet and took a vicious bite out of his neck, killing him instantly. A third man jumped on top of the truck's hood and stopped dead out of pure shock, as he was now level with her. The dragon snarled and slammed her tail into his chest. It sent him cartwheeling off the edge of the road and down into the ravine beside it, screaming the whole way.

The dragon snorted once and then hurried over to Jack and Kamala, sniffing them briefly in confirmation, and then nudging them towards her large, scaly torso.

"I… I think she wants us to get on," Kamala said, dumbfounded as Pete bumped her side up against them and flapped her huge wings.

Impatient, the dragon slid her neck through Jack's parted legs and stood up, barking once at Kamala. She threw her leg over the dragon's back. Then Pete took three mighty steps towards the edge of the road and leapt off.

For three terrifying seconds, they dropped through the air like a cement block.

Then, Pete's leathery wings spread and they flew.

Gunfire cracked behind them, but the dragon flapped her wings to carry them higher out of harm's way. She wheeled to one side and they disappeared into the shadow of the mountain range, over the forest below.

Jack dug his fingers into the dragon's collar and finally opened his eyes. He stared speechless at the ground easily forty feet below them and into the cloudy horizon. Wind whistled past his ears, interrupted only by the powerful strokes of the dragon's wings and the raspy clink of the chain still dragging below her body as they cut through the crisp air. She flew smoothly, as if she'd been doing it all her life, as if it were an effortless skill.

Behind him, Kamala had locked her arms around his waist and buried her face between his shoulder blades when they'd first taken off. Now, she held one hand out flat, her palm parallel to the ground, feeling the wind rushing over it. Half-hysterical laughter enveloped them both as the dragon carried them higher still, until they were circling one of the mountain's peaks.

Enormous clouds piled high around the mountain and the air became sharply cold as they neared it. The trees stopped halfway up its craggy face and gave way to perpetual ice created from the height and upper atmosphere. As Pete circled for the fourth time, they realized she was searching for shelter.

On the fifth pass, the dragon brought her wings in close to her body in a dive as they reached a cliff near the mouth of a cave. She fought the stiff wind and landed hard, digging her claws into the earth. Jack helped Kamala off and the dragon shook herself and stepped forward into the cave. The two of them called to her, but she paid them no mind. The freezing temperature and high winds wouldn't make it easy to get down any time soon.

They had no choice.