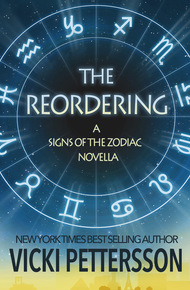 Vicki Pettersson is the New York Times bestselling author of the 'Signs of the Zodiac' series—featuring reluctant superhero, Joanna Archer—as well as 'Celestial Blues', a para-noir trilogy about a P.I/angel from the 50's who pairs up with a modern-day rockabilly reporter. Together, they fight crime. Both series are set in her hometown, Las Vegas.

Pettersson now divides her time between Sin City and Dallas, Texas, where she's learning to like good Tex-Mex (easy) and the Dallas Cowboys (easier than you'd think). For more information on Vicki's books, please visit: http://vickipettersson.com/

The Reordering by Vicki Pettersson

Joanna Archer is back.

From New York Times bestselling author Vicki Pettersson, comes The Reordering, an all-new, action-packed novella, and sequel to the NYT Bestselling Signs of the Zodiac series.

Joanna Archer is a superhero … or would be if she hadn't blown up the underpinnings of the entire supernatural underworld and walked away. With the promise of new life stirring in her body, and her lover, Hunter Lorenzo, firmly at her side, Joanna believes she's earned her hard-won peace. Yet when her mother, Zoe, is reported missing, Joanna must take up arms once again and return to Las Vegas. Because there is a Reordering of the Zodiac world underway…and a powerful new evil rising from the rubble she left behind.

Never before published,The Reordering is a 25,000 word original novella.

Vicki Pettersson has been a dear friend for years and she was looking for some inspiration. When I asked if she had anything available for the Urban Fantasy bundle, she didn’t…but she used that as an excuse, and a deadline, to write something brand new, to order. You’ll get a chance to read this for the first time. – Kevin J. Anderson

My name is Joanna Archer and if you know anything about me at all you'll know that patience isn't one of my virtues. Then again, judging me by any normal standards of propriety requires digging past a pretty hefty body count … even though I've never killed anyone who didn't try to kill me first. In my world—one where superheroes and villains battle for the souls of cities and men—that policy alone passes for a moral compass.

So when the summer breeze shifted my way, bearing the scent of something both metallic and living, like electrical wire threading rotting meat, there was no question that I was going to take matters into my own hands. Not while I stood three blocks from my picket-fenced rental. Not in the new life I'd carved out for myself in Los Angeles.

Not at eighteen weeks pregnant.

Resisting the urge to glance behind me, I crossed the street and slipped into a sandwich shop to regroup. I ordered a foot-long hoagie, double everything. The midday sun would heat the ham and salami and turkey enough to cover the scent of my newborn alertness. Hunter told me the air smelled of ozone and (oddly) baked goods whenever I became singularly focused. As the most singular object of my focus, he would know.

I wore a masking compound to shield my natural scent, of course, but Hunter was having to tweak it every couple of weeks in order to keep up with my rapidly changing physiology, and he'd be the first to tell you he was no chemist. His talents lay in devising and developing weaponry, and though I couldn't scent myself—an agent never could—the fact that I had company meant he'd clearly missed a spot.

Wandering to the plate glass window, I pretended to check my phone for messages, and scanned the street for signs of my new admirers. There was more than one, I could tell that much, but the road remained empty. That meant they were adhering to the rules of the Zodiac world, and keeping our confrontation out of sight of the mortals.

Good, I thought, scooping up the sandwich. I liked it when others played by the rules. It gave me a clear advantage when I broke them.

I took one more deep breath and exhaled fully before pushing out into the smoggy heat of a Los Angeles afternoon. It wasn't bad compared to the broiling summer bowels of the Las Vegas valley where I was born, and where I'd lived up until six weeks ago. LA was also the perfect place to lay low after engaging in an all-out war with the leader of the Shadow side and blowing up the entirety of Sin City... or at least, the supernatural underworld buzzing beneath it. (Don't worry. The garish, glowing city thrumming against the desert floor like an open nerve remains intact. You're welcome.)

Hunter and I had headed west after that, stopping for nothing but gas until our toes finally touched the soft sand that kissed the lip of the shining Pacific. Pregnant, having just prevented supernatural apocalypse, and fending off the enslavement of all mankind had, unsurprisingly, proven exhausting.

Problem was, my heartbeat didn't move to the rhythm of the ocean's voice, and after a couple of weeks of slushy drinks and roaring waves, my blood began to hum. Not a pleasant buzz. More like a hornet dropped into the folds of my brain. I was a city girl, born and bred, and I needed the bustle of streets and traffic, of crowds and noise. Maybe it was in my blood.

Maybe I just craved being near the mortals I'd been charged to protect.

Pausing next to a gas station that sold street tacos through an unmarked back door, I deposited the sandwich in my shoulder bag and pulled out the Nikon that Hunter had given me. He'd bought it from a pawnshop three weeks earlier, surprising me with it over a dinner of vegan sushi and fresh-pressed juice. Although the light California fare was new, photography was an old hobby of mine, one I'd pursued back when I was still just me. Before I knew anything about Shadow or Light or all the shades of gray that lay in between.

Surprisingly, snapping photos—framing and composing and coloring them—no longer reminded me of who I used to be. Maybe it was because I was no longer using my camera as a shield. Whereas I'd once made a study of my bruised knuckles or the way my eyes flashed to black when angry—things that marked me as different than other women in their mid-twenties—I now used my camera to amplify the similarities between me and others. The connections. This time around, I was happy to be a part of the world around me.

But old habits died hard. Being stalked still pushes every hot button I have, so wondering what these guys wanted, and waiting for them to strike didn't make me want to duck and cover.

It just made my trigger finger twitch.

Instead of reaching for my weapon, I swiveled under the pretense of capturing the slow-burning sunset, and snapped two quick shots behind me. Then I slipped into the shade of the gas pumps and peered into the view box.

Two men, neither of whom I recognized. One was as white-bread as I was, tall and thin, sweating so profusely that I'd likely scented him first. The second man had a shock of red hair, though the most important thing about him was the weapon he was failing to conceal in a pair of khakis too big for his backside. His lopsided gait undercut the seriousness of the bulge in his pants, but I didn't laugh.

Flipping between the two images for another ten seconds, I devised three different ways to incapacitate each of them before tucking my camera back into my leather shoulder bag. I started walking, leading the two men away from the innocent mortal population.