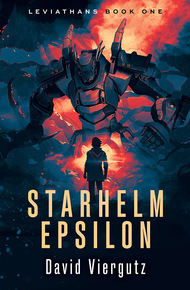 David Viergutz is a disabled Army Veteran, Law Enforcement Veteran, husband and proud father. He is an author of stories from every flavor of horror, sci-fi and fantasy.

Take the plunge into David's imagination as he delivers chill-bringing adventures where the good guy doesn't always win. David remembers dragging a backpack full of books to class beginning in middle school and leaving his textbooks behind.

David takes his inspiration from the greats and fell in love with complex universes from the desks of Nix, Tolkien, King, Stroud and Lovecraft to name a few. David's imagination, combined with his experience in uniform give his books an edge when it comes to the spooky and unnerving.

One day, David's wife sat him down and gave him the confidence to start putting his imagination on paper. From then on out David's creativity has no longer been stifled by self-doubt and he continues to write with a smile on his face in a dark, candle-lit room.

Royce used to be a talented mech Pilot, but now he's a washed up and in hiding.

Stuck combing slums and backwater planets, hopping from job to job, Royce makes it to a substation and is quickly caught up in a new conflict he wants no part of. His identity is revealed, along with the secret location of one of the few remaining Starhelms, the ultimate war machine. The mech of all mechs.

To complicate things, he's accompanied by a mysterious woman on her own quest with too many secrets. Secrets which attract the attention of all three factions vying for control of the galaxy.

Now, Royce's simple life of surviving has become a battleground, and he must recover his Starhelm before the factions do. For the things they will do with it will not lead to war, but the obliteration of the entire galaxy.

Somewhere in deep space on a derelict mining planet

Even the planets are tired of the galaxy's crap, Royce thought as he pressed the button to atomize the food pellet in the galley of his newly acquired A2-class Tugboat, a piece of junk outfitted for scrapping and hauling other hunks of junk of lesser size. This ship wasn't Royce's style, and he didn't pretend it was. It wasn't his, after all. There was a lot wrong with it. Bolts that weren't supposed to rattle, rattled. Pipes vented noxious gases requiring breath-holding when walking past them, and most of its systems were analog. This didn't even account for the food on board, which was meant for a Jarmet, a seven-foot-tall worm-like species with a penchant for dirt. It came as no surprise when the food pellets materialized into mineral-infused potting soil.

Royce hurried the dish on a silver tray to his co-pilot, a worm whose name he couldn't pronounce. He located him, or it, near the loading dock, oozing a trail of green slime near the console that operated an on-board industrial crane. Royce's boots echoed on the grate as he entered the bay, and the overgrown worm looked at him with three of his six eyes while no less than twelve arms pressed at the controls.

"Here, tastes acidic," he said, holding the tray out to the worm. Now, with nothing else to occupy his mind, he waited, hands on hips, as the worm continued away at the keys with some of its hands while the others upended the dish into a circular maw with dozens of teeth. Then it ate the tray too.

"You know, you keep doing that and I bet we'll find something you can't digest." Royce strode over to the panels and watched as the worm typed away in a language he guessed was Jarmet.

Royce folded his hands together in a sarcastic prayer. "Tell me you're trying to get us off this planet?" Then the entire ship lurched. He steadied himself.

"Feel that? That's the third one in the last hour. Seismic shifts are not good, bugg-o, and you owe me one. If not for me you'd be outside, roasting as this planet spews noxious gases and burning rock."

The creature responded with a gurgling, choking sound, eyeballs focused on the panel and all hands typing away furiously. Then there was a metallic whine from behind as the door to a storage room opened. It was full of metal cabinets.

"All this time we've been sitting here you've been trying to get a single door open? What're you going to do? Eat the furniture? Alright, next time, I'm stealing a ship with AI, because you're the worst co-pilot ever. Also, what do I call you? How about Jarmet? I like Jarmet. Also, male? Female? Help me out here."

The worm ignored him and slithered off into the room. The sound of cabinets crashing and things spilling out onto the floor filled the next few seconds before it, or maybe he, reemerged holding a silver band with a transponder in the middle. It unclasped it with surprisingly fine motor skills and buckled it again around what should have been its neck.

The device chirped once, the panel on the front glowed sky-blue, and the worm garbled. The device said in a generic and mildly sarcastic voice, reminiscent of an Old English accent, "Well, if you hadn't stolen such a shitty ship, I wouldn't need to use a translator in the first place. Most just refer to us as our species title—Jarmet—and I am the equivalent to a male, because that is what your feeble mind can understand."

Royce raised an eyebrow. "Okay, now I wish you hadn't found a translator. I prefer the gibberish."

The worm garbled again and the device took a second to translate. "I also wanted to tell you that you're an idiot and we're going to die."

A massive explosion shook the ship and scattered shipping containers from wall-mounted shelves. The large chunk of asteroid suspended by chains in the middle of the bay rattled.

"Pick your poison, worm! That's the fourth one, and the readouts of this planet's core were bad three hours ago. You may have three brains and who knows how many stomachs but I know you've only got one life. See those chains? If that chunk of Elamite hits the deck, we'll explode. If we sit on this planet any longer, we'll explode. Got it?"

The Jarmet pressed the button on the translator then said something before slithering off to the cockpit.

"What was that? What'd you say?" Royce called after the worm, then took one last look at the Elamite. It wasn't much, but it'd hopefully get them enough fuel for this Tugboat to reach the next planet. Asteroid mining was dangerous and expensive in and of itself, but for someone like Royce, it was about the only option.