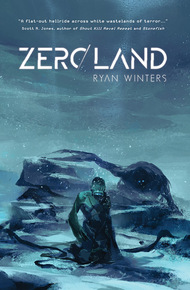 Ryan Winters has been chased by a bear and attacked by a wolf. He has dug trenches in the Arctic Circle and fronted a punk band, and now works in marketing. Though his heart remains in Alaska he currently lives in southern Oregon, where he dreams of mechs and brutalist architecture.

Ten years from now the United States as we know it will cease to exist.

Since the secession of the Southern Fourteen, the Reformed United States has faced its share of crises, from ravaging wildfires to extreme desertification to toxic water supplies. Now, a man has been murdered at a research facility in the Arctic Circle and a deadly alien creature is on the loose.

Inspired by his time working in the arctic and spurred on by our current political climate, Ryan Winters' Zeroland follows a group of characters, each with pasts they'd prefer stay buried, doing all they can to survive in a world where life has become defined by environmental devastation. Under the eye of shadowy governmental oversight, the intertwined fates of these people—and perhaps the world—are on the line.

WITH MILES OF snow-covered tundra in all directions and an overcast sky that revealed no stars or moon, Sledge and her partner Forest trudged into a vast emptiness. The old pipeline was visible, but little else. Sledge had led expeditions through worse conditions, but that was hardly a comfort in the moment.

Sledge indicated that Forest should look to the pipeline. She and Forest were tethered by a thin fiber-optic cable that allowed them to communicate post-verbally, conserving oxygen for the trek to the old pump station. The junior officer gave a sign of recognition as he gazed into the snow. Not far ahead, the pipeline disappeared into the ground. That was the sign, how they would know they had reached the pump station. They trudged forward with renewed enthusiasm, and within a couple of minutes the ruins of old buildings came into view. Abandoned for nearly forty years and ravaged by the extreme weather of the past decade, the collapsed processing centers and oil tanks were post-industrial ruins on a blank landscape.

Sledge pulled up a three-dimensional model of what the station had looked like in its heyday, and rendered it using an augmented reality display to overlay it on the snowy landscape in front of them. They stood near what had once been the biggest building on the site.

"They used to call it Mile Zero," she said, her thoughts appearing in a series of flashing dots and dashes before Forest's eyes, along the bottom of his helmet's HUD. "The beginning of the pipeline."

Forest's remark flashed in front of Sledge's eyes, but she ignored it. He was in his early twenties, so all he remembered was the Reformation government. Sledge, at 43, had only been an infant during the war and the installation of the Reformation. Still, at times it seemed an unbridgeable generation gap. There might as well have been eons between her and her expedition partner. The seismic shift the Reformation had created globally took a backseat only to the Second Civil War itself. In many ways being in this place, the pipeline and its representation of fossil fuel consumption and the ensuing environmental crisis, was like standing at a monument to all that had changed during her life. There was more than one reason why some people referred to it as the War of Ideals.

Red lights flashed along the ticker on Sledge's HUD again.

"This place is still zero," Forest was saying. "What are we doing here?"

"HQ has registered bio signs at regular intervals at this site for two months."

"This have anything to do with all the UFO freaks?"

Sledge scoffed to herself. "The aircraft came across the Bering Sea. It's more likely it came from Russia than outer space."

"So you think a Russian spy is out here? In this shit?"

The truth was, Sledge didn't know much more than what she could tell Forest. Despite the probability that the aircraft had originated in Russia, Domestic Security had taken a measured course of action, and though the aircraft had disappeared from radar, it could only be assumed that it had landed—or crashed—where the pings began registering. The bio signs showed incredible consistency both in schedule and location, and that's when DS had chosen to move on from drones and mount a human expedition.

That's why Sledge had been called in. She was an expert in the emerging field of Sign of Life Expeditions, which had boomed due to the increasing number of areas around the world that had been placed under quarantine or determined to no longer be habitable. Sledge had become somewhat of a celebrity after leading an expedition into Chicago after the mandatory evacuation of Illinois, Michigan, and Wisconsin a few years back, when Lake Michigan's toxicity began causing mutations in the surrounding flora and fauna. Forest, on the other hand, was a new recruit who needed field experience.

As they sifted through rubble, Sledge couldn't help thinking about the differences between the two assignments. The world had become a case of diametric opposites in terms of climate. After much of the country had burned in sweeping wildfires thirteen years ago, the weather shifts had become increasingly unpredictable. Some areas fell victim to a proto-Ice Age, while others suffered from unlivable desertification or toxic soil and water. Sure, Sledge would take the cold, but that didn't mean she had to like it. Not that there was much use in being angry at generations of her forebears who had wrecked the planet. The damage had been done long before Sledge was born.

A haptic vibration buzzed in her helmet, calling her attention to a hailing message that Forest was sending her. She looked up and scanned for him. He was ten yards away, kneeling on the ground by a large object. Sledge's scanner couldn't get a reading on the material he was examining and the closer she got, the more her HUD glitched out. She knelt opposite Forest. The object was large and black, somewhat spherical in an uneven and, from certain angles, deceptively flat manner.

Sledge indicated that hers was as well. Worried that her helmet's video feed would be affected by whatever technical problems were going on with the display, Sledge pulled out the small manual camera she kept in her suit's hip pocket. She snapped off a couple of quick photos from various angles and tucked the camera away. The camera fed directly to her NuComm cloud storage, so the pictures would be waiting for her when she compiled her report.

Sledge whispered to herself; it was how she remembered the things she wanted to jot down in her notebook later. She took a deep breath and reached out to touch the artifact. The sensors in her glove pulsed on contact. They registered the temperature at 312 degrees Fahrenheit. Sensors must be glitching, too, she thought. Nothing could stay so hot in this weather. She pulled her hand away and the surface of the object became viscous, stringing out in long rubbery strands. Sledge stood quickly, and the black strands snapped back to the sphere. She cursed out loud, her helmet's display fogging momentarily.

Sledge held her hand to her face. Small traces of black remained stuck on the coils of her glove's sensors.

"We need to set up camp," she said. "We should look for somewhere that can provide a bit of shelter from the weather."

"I think I saw something earlier," Forest said, indicating the southern side of the station.

Sledge assented and followed Forest, hoping he knew where he was going. With their scanners on the fritz and this strange discovery, Sledge wouldn't be afraid to admit that she was a bit spooked. Hell, just the fact that she was spooked was enough to spook her.

The surface of the black sphere began to shift. It bubbled and stretched. It spread and crawled and morphed. One side thrust into the air like a stick until it grew into a long tentacle-like limb and then a second sprouted. Together the limbs pulled the rest of the black mass along through the snow as legs began taking shape. A head formed last, a jaw stretching wide as all the pieces of the creature pulled together into a working unit.

It moved purposefully, tracking Sledge and Forest as they made their way across the pump station. It caught up with them as they neared the stairs leading up to the last intact structure left on the grounds. Its limbs stretched like mucousy glue, grasping their helmets simultaneously and tearing them off and snapping their necks before they even had a chance to catch their breaths against the influx of cold air. Then it engulfed their bodies. By the time it moved on, all that was left of the pair was a smattering of bones, nearly imperceptible against the snow-covered ground.