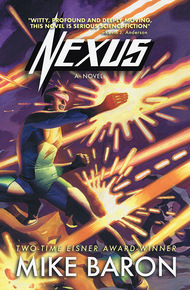 Mike Baron is the creator of Nexus (with artist Steve Rude) and Badger two of the longest lasting independent superhero comics. Nexus is about a cosmic avenger 500 years in the future. Badger, about a multiple personality one of whom is a costumed crime fighter. For comics, Baron has written The Punisher, Flash, Deadman, Star Wars, and many other titles. He has won two Eisners and an Inkpot award.

Baron has published fifteen novels including Banshees (a Satanic rock band that returns from the dead), Helmet Head (Nazi biker zombies), Whack Job (spontaneous human combustion), Skorpio (a ghost who only appears under a blazing sun), his Biker series (a reformed biker hoodlum turned private investigator), and Florida Man (which is exactly what you think it is).

The popular comic hero stars in his first novel!

Nexus is the greatest avenger the galaxy has ever known. He has faced mass murderers and alien monsters.

But his power comes from an alien race with its own agenda. Is the mighty Nexus hero or pawn? Deliverer or destroyer?

Gourmando, the devourer of worlds, now has an appetite for Ylum, the home of Nexus.

How can one man, no matter how powerful, stop an entity that consumes whole planets?

Based on the bestselling comic book created by Mike Baron and Steve Rude, this is Nexus's greatest adventure (for now, at least!).

Osceola was a tiny planet in a vast universe. It took light from Osceola thirty-three million years to reach Earth, or would have, if its light could reach Earth. But its light could not reach Earth because of intervening systems, radioactive clouds and black holes which either blocked light's path or absorbed it. And even if that light did reach Earth, and there were Earthlings there to see it, they would only have seen a peculiar blue/green marble hanging against a black backdrop, with no sign of life.

When life appeared on Osceola, it grew at a phenomenal pace as if some intergalactic Johnny Appleseed had paused to sow the precious DNA. Were it possible for a human being to look at Osceola contemporaneously, he would have been astonished to learn that the period from which the first primitive, one-celled organisms appeared until civilization was a mere fifty millennia, or five miriaanum. Any astrologer, physicist, astrophysicist or anthropologist would tell you that is impossible.

But with intelligent design, it could be done.

Osceola had floated gray and inert for a billion years. Overnight, water, oxygen and carbon appeared. From there it was a mere hop, skip and a jump to the appearance of plankton-like plants, and from there, a swish and a whoosh to the first four-legged creature crawling out of the primordial muck. A mere thousand years until the appearance of a bipedal, opposing thumbs sentient, the first Osceolan. Osceolans were far from human, but there must have been something about the design that suited their planet. All that oxygen. All that water.

Society coalesced. And because the Osceolans weren't human, they side-stepped a lot of the problems that have plagued humanity. Which is not to say they were without vices. But the wars that have plagued mankind failed to appear. Perhaps it was because Osceolan society was agricultural and built around communal property. Every time humanity tried communal property, it failed due to human nature. Greed, malice, envy and resentment. Pride of ownership.

The Osceolans had their failures, but greed, envy and resentment were not among them. Osceola never advanced to an industrial society, and many Osceolans died young for a variety of reasons, including unchecked disease and natural disaster. Nor were they saints. There were no great philanthropists or artists among them. They could be cruel, but more often their cruelty was obliviousness. They tended to be overly literal. Their imagination stopped at the end of the garden.

They worked their fields. Bitter root was edible, provided fiber, and could be used to make lightweight, malleable building materials. A day on Osceola lasted twenty-six Earth hours. They based their measurement of time on the length of the day, and rotation around their sun, which took two hundred and eighty-five Earth days. They had only two seasons, growing and not growing.

One day, early in the growing season, a young male wearing bitter root coveralls worked the bitter root field behind a beast that resembled a warthog, pulling a plow made from mined metal. Their metallurgy was crude, involving open-air hearths and the art of the blacksmith, but skilled artisans were able to bang out pretty much everything they needed. They had a few spears and swords for hunting and protection against wild animals, which included carnivorous cat-like creatures.

As the Osceolan guided his draft animal down the field, the creature came to a halt, pawed at the earth and snorted. The Osceolan, whom we shall call Maurice, found that the creature was staring intently at an unknown plant that grew before its eyes. It resembled a hair. A stiff bristle, not unlike those adorning his draft animal.

Maurice squatted and stared as the black hair wavered and advanced. There was something alien and unpleasant about its dark, whorled surface. Maurice picked up a twig and poked the spike at its base. It reacted violently, whipping around, striking Maurice's wrist, leaving a red welt. It burst forth and advanced three feet in the air, causing Maurice to tumble backward, scramble to his feet, leave his plow away and run for the village.

As he ran, other black spikes sprouted, swirling to a nonexistent breeze, striving for altitude. Maurice heard distant shouts from beyond a copse of trees. He ran and he ran, feeling his plasma pulse in his joints, his pumper redlining. Bursting through a patch of gorse, he saw the village, a modest and appealing set of circular stucco domiciles with peaked thatched roofs, in the distance. From the corner of his eye he saw others running toward town. Old Mosby from across the river. That Spatz kid from up the hill.

A wooden tower, the tallest building, rose sixty feet above the meadow at the main entrance. The great bell began to peel. The Council was calling for a town meeting. Maurice joined the river of Osceolans working their way through the town's winding pathways toward the town hall, a great dome that could seat two hundred, off the town square. The dome, constructed of triangular sections, wore a dozen triangular windows like a crown. The windows were covered in transparent sylk harvested from nine-legged spiders found in warm, damp forests.

Osceola's climate was fitful and unpredictable, affected as much by subterranean plasma and magnetism as by the atmosphere. Maurice ran into his neighbor Spacesworm outside the main entrance.

"I hear ya, I hear ya," Spacesworm said as they went inside. About one hundred and fifty villagers squatted on the mats arranged in a semicircle before the speaker's podium, set on a wood stage a foot off the ground. The atmosphere was humid and tense, a steady drone of conversation punctuated by barks and exhortations.

A blue feather bobbed above heads at the entrance as the Speaker made his way through the crowd. A committee of nine selected a new Speaker every fortnight. Four times a year, the villagers threw their chits into a hat. The Speaker drew nine chits and that was the new committee.

As the Speaker stepped up on the platform, old Phineax cupped his gnarled hands around his mouth.

The Speaker tamped down the din with his hands. "I hear you, Phineax. May we have a little quiet? A little quiet please."

Maurice rose to his feet and cupped his mouth. "QUIET!"

The room fell into a faint crackle. The Speaker gripped the podium.

Old Phineax rose to his feet. "WHAT THE HELL!"

"They're all up in my fields!" cried a farmer.

The Speaker pointed at Maurice. "Get that checked out right now. Where's Lorenz? Is Lorenz in here?"

A thin female wearing a caftan waved her arm. "Here I am."

"Check out Maurice's scratch, will you? Make certain he's not going to suddenly give birth to a million spider babies."

Lorenz motioned for Maurice to join her at the rim, beneath a beam of sunlight.

"We are familiar with the plant," the Speaker said. "It does burst out from time to time, but never in such profusion. Previously, it was like a garbil leaping for a branch. Not quite able to get the altitude. But now the garbil has returned, more powerful than ever, and it has taken a running start, and it has reached the branch.

"The plant is impervious to cutting. It excretes a fungus that will eventually crowd out all other plant life. The only way we were able to examine this plant was when it died. Only then could we detach it from the soil and apply science. It breaks down into a nutrient-rich protein, but it is not a protein we can digest. It is not an Osceolan friendly food.

"Thus we must ask ourselves. Whence came this plant? Who eats this food? We are a small race on a small planet with limited resources. It is not always possible to record what has happened in the past, but there is one recurring legend, many moons ago, of a chromium alien slashing through the sky on a chromium platform, hand outstretched, dispensing spores which settle to the earth.

"There is a legend of an uber being, a living creature too vast for civilization. The largest living thing in the cosmos. A thing that dines on civilizations, indeed on whole planets. The planet is the protein, the civilization is the flavor.

"And this creature employs a herald, a chromium alien who zips about on a platform, and his name is Gnosis. And his master's name is Gourmando."