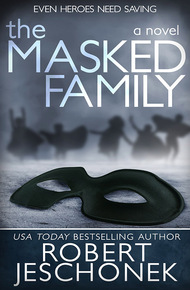 Robert Jeschonek is an award-winning, USA Today bestselling author whose action-packed, envelope-pushing fiction has made waves around the world. His stories have appeared in Mystery Magazine, Pulphouse Fiction Magazine, Clarkesworld, Black Cat Mystery Magazine, and other publications. His crime tale, "The Messiah Business," appeared in Fiction River: Risk Takers and was named an honorable mention in Year's Best Crime and Mystery Stories. His novels have won the International Book Award, the Forward National Literature Award, and the Scribe Award.

The Masked Family by Robert Jeschonek

Cary Beacon is a super-hero in his own mind. His mission to rescue two endangered children leads him to Mexico, where he teams up with a masked wrestler who is crazier than he is. As Cary and the wrestler fight the battle of their lives to save the kids, Cary's disappearance forces together his fractured family back home, torn apart by a fiery tragedy decades ago. In their quest to find Cary, his sisters and brother must break down walls, root out secrets, and unmask an arch-enemy long thought dead. The parallel quests of Cary and his family are linked to an explosive moment in real-life history: the Ku Klux Klan's siege of the Pennsylvania mining town of Lilly in 1924.

Though Cary Beacon knew in his heart that heroic measures would soon be called for, he left behind his super-hero costume. After all, it was only the costume of a make-believe hero from comic books and movies. Cary just wore it to make money by showing up at kids' birthday parties or car dealerships.

It had nothing to do with the fact that he was a real-life super-hero.

He laid the blue tights and red cape on the bed and stared at them for a moment. He would just have to be a hero as he was—bony tall body, red hair streaked blonde, beat-to-hell leather jacket and jeans, red t-shirt with comic book sound effect "POW!" in black block letters in a jagged yellow starburst on the chest. He knew it wouldn't matter what he looked like as long as he managed to save his kids.

Cary stopped staring at the costume and went back to packing. If he wanted to save his kids, he had to hurry.

Well, they weren't really his kids, at least by blood. In fact, the people who had taken them were their actual birth parents, their genuine mommy and daddy.

That didn't mean the kids belonged with them, though.

Cary charged through the trailer, gathering up clothes and odds and ends and pitching them in Wal-Mart shopping bags. His ex-girlfriend, Crystal Shade, had taken the suitcases at the same time she'd taken the kids.

Cary shouldered the screen door open, raced down the battered wooden steps, and chucked his loaded shopping bags into the back seat of his taxi. Without closing the car's door, he bolted back inside the trailer to grab a few last things.

He bagged what little food was left in the place, which amounted to a jar of peanut butter, half a loaf of bread, two apples, and three cans of SpaghettiOs. He yanked the sheets, blankets, and pillow from the bed and threw them in the cab, too. Beyond that, Crystal had pretty much cleaned the place out. While Cary had been hard at work driving fares around town, she'd been stealing the kids he loved and everything he owned.

Kneeling in the rear corner of the bedroom, Cary peeled up the stubbly gray carpet. Jamming the blade of his pocket knife into a crack in the floor, he pried up a square of plywood.

Sweat ran down his back and sides as he reached into the hole and drew out a manila envelope. He undid the clasp and folded back the flap, then pushed his hand inside.

He pulled out a rubber-banded wad of money and dropped it on the carpet, then reached back in to fish out what he really wanted.

As his fingers closed around the familiar shape, he felt a surge of relief. Crystal hadn't taken everything, hadn't even found this hiding place.

Super-heroes need good hiding places because they've got so much to hide.

Crystal didn't even know the Starbeam Ring existed. Cary had lived with her for over a year, and he'd never shown it to her or even mentioned it.

Holding up the ring, he watched the light gleam on its faceted surface. To the uninitiated, it might look like a hunk-a-junk kids' toy from a gumball machine, molded from see-through blue plastic.

Only Cary and the rest of his super-hero teammates, the Nuclear Family, would know better. They would know at a glance that this was a Starbeam Ring, said to bestow super powers on its wearer.

Not that any of them would believe that the ring really did bestow powers...except Cary, that is.

The rest of the Nuclear Family—Cary's brother and two sisters—all had rings of their own. They all agreed that their father, who had given them the rings in the first place, had made up the story of the Starbeam Rings just to stoke their imaginations when they were kids.

"When you need your powers most, they will come to you," their father had told them solemnly, back before the oldest of them had turned ten. "Always remember that when the chips are down, your secret powers will save the day."

The others had stopped believing, but not Cary. He still thought that when he truly needed his powers the most, the ring would activate them. Even though they had let him down before, again and again, he still believed.

Even though, years ago, when he'd never needed them more, they'd failed him...and someone he'd loved had paid the price.

This time won't be like before. Nobody dies this time.

He slid the ring onto the only finger small enough to fit through it—his left pinky. He stuffed the wad of bills, his secret savings, back into the manila envelope, and got to his feet.

Just then, his cell phone rang.

Pulling it from the pocket of his bluejeans, Cary stared at the glowing blue caller I.D. screen embedded in the shell. Instantly, he recognized the number displayed there.

It was the number of the cell phone he'd given little Glo for her birthday a month ago, in case of emergency. The phone he'd made her promise to keep secret from her mother, who'd been starting to make him suspicious.

He snapped his phone open and pressed it to his ear. "Hello?" He kept his voice low so the caller would be the only one to hear it.

"Help." The voice on the line was midway between a whisper and a squeak. "Please help us."

Cary had a thousand questions, but he knew the little girl wouldn't be able to talk for long. "Where are you, Glo?"

"Bathroom." Glo sounded like she was on the verge of breaking into sobs. "At the airport."

"Call next time you have a chance," Cary said quickly. "Don't let them find your phone."

He wasn't sure if Glo had heard him, because the call was dead by then.

As he closed the phone and slid it back into his pocket, he wished that Glo had given him more details about her location. At least he knew that she and her brother, Late, were okay.

For the moment, anyway. The key now was to catch up before the monster could hurt them...the monster otherwise known as Crystal's new boyfriend, Drill. He was also her boyfriend from years ago, long before Cary came along.

And he was Glo and Late's father...but no less a monster for having brought such great kids into the world.

Just thinking about Drill and what he might do to Glo and Late was enough to throw Cary into high gear. He didn't even take the time for a last look around the trailer on his way out.

He switched off the lights and darted outside, letting the screen door bang shut behind him. He didn't bother locking the door, because nothing of value was left inside.

Nothing mattered anymore except the kids, and saving them from the bad guys.

As much of a rush as he was in, Cary hesitated once he got behind the wheel of his cab. For a moment, as he thought about the job ahead of him, he felt overwhelmed.

Crystal and Drill had a huge head start. Cary didn't even know exactly where they were. Drill, especially, was tough enough that he'd probably kick Cary's ass if he did catch up to them.

Unfortunately, as much as Cary would've loved having some Nuclear Family backup, he knew it wasn't coming. His brother and sisters had abandoned the super-hero life long ago. Cary had held out hope for a reunion longer than any of them, but even he had finally given up on the team.

His brother and sisters just didn't care about being super-heroes anymore. The fate of Glo and Late was up to him and him alone.

Cary took a deep breath and gripped the steering wheel.

Only The Hurry can come to the rescue this time! Don't miss this pulse-pounding solo adventure of the Nuclear Family's own human sonic boom!

With a steely gaze and a grim expression, he threw the cab into gear and stomped on the accelerator. Gravel spun out from under the tires as the car leaped away from the trailer and hurtled off down the road at more than twice the legal speed limit.