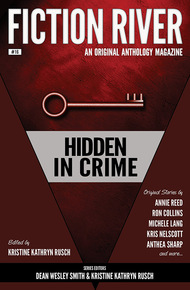 Hidden in Crime by Fiction River

Imagine paying a fine for walking across town. Or hiding an illegal marriage. Or losing your life for playing the harp. Strange crimes, dangerous activities, some from the not-so-distant past, return to life in Hidden in Crime. See why Ellery Queen Mystery Magazine says Fiction River's crime volumes have "high quality throughout," and why Publishers Weekly states "… fans of the unconventional will be well satisfied." Join some of the best authors in the business as they uncover once-hidden crimes.

Table of Contents
“The Color of Guilt” by Annie Reed
“Hiro’s Welcome” by Patrick O’Sullivan
“The American Flag of Sergeant Hale Schofield” by Kelly Washington
“Combat Medic” by Kris Nelscott
“Night of the Healer” by Tonya D. Price
“The Quality of Mercy” by Michele Lang
“Daughter of Joy” by Cindie Geddes
“Democracy” by Mario Milosevic
“Sisters in Suffrage” by Debbie Mumford
“Knocked Up” by Elliotte Rusty Harold
“O Best Beloved” by Angela Penrose
“Sunshine” by Michael Kowal
“The Harper’s Escape” by Anthea Sharp
“As the Berimbau Begins to Play” by Paul Eckheart
“Death of the Turban” by Bill Beatty
“On the Edge of the Nations” by Dan C. Duval
“Window Frame, Handprint, Bloodstain” by M. Elizabeth Castle
“The White Game” by Ron Collins

Nothing pleases me more than a well-written crime story. As an editor, I'm best known for my award-winning tenure at The Magazine of Fantasy & Science Fiction. But I started with Pulphouse: The Hardback Magazine, which blended genres, just like Fiction River does. Only Pulphouse demanded shocking or unusual things from its writers; Fiction River demands good stories.

Whenever I edit one of the Fiction River volumes, I start with genre. This is the third Fiction River volume I've edited with "crime" in the title, and the second that combines crime fiction with historical fiction. As a writer of historical fiction, the thing I've noticed the most is that much of what was illegal in the past isn't illegal now. Or, conversely, much of what was legal in the past isn't legal now.

Laws change as frequently as fashion. Laws go in and out of style and reflect the cultures that created those laws.

This year, when I asked more than fifty professional writers for historical crime stories, I gave them a page of specific instruction. I learned my lesson with Past Crime; I didn't explain what I wanted clearly enough then.

I had to figure out a way to make what I wanted clear for Hidden in Crime, but not so clear that I got fifty stories that were exactly the same.

Here's the relevant portion of the guidelines I gave the writers:

Laws are fascinating things. They reflect the ethos of their times, and the attitudes of lawmakers. Nothing is illegal in every society, not one thing. In some societies, murder is legal—witness the mass murder of the Jews in Nazi Germany.

Often, women, children, and minority populations feel the brunt of these laws. The laws are designed to protect those in power or to maintain a status quote.

It might be hard to write a crime story about driving or employment discrimination if that's your only focus. But I will accept a story about a murder if somehow that murder came about because a woman drove a car or an Irish immigrant applied for a job.

If you take out the old law or the thing that modern readers are shocked about being illegal, the story will fall apart….

The guidelines were successful. When the writers missed, and many of them did, they missed because they reached too high rather than reaching too low. In other words, they didn't all write stories about Prohibition. The writers told their stories, and not a single one was the same.

As usual when I open Fiction River to a select group of professionals, like I did this time, I get more stories than I could use. I turned down some brilliant stories because they explained the old law and did nothing else. Those stories did follow a pattern which went like this:

Readers enter an unfamiliar world, and discover that something mundane was so illegal that people in that time period got put to death for doing it! Shocking! Horrifying! The end!

And that was exactly what I was not looking for. I wanted to immerse myself in the time period and not feel that shock of unfamiliarity. I wanted it to seem right—not weird—that some strange law existed. And because of that strange law, something even worse happened.

I wanted these writers to juggle, chew gum, drink water, and hold a conversation all at the same time. Most of the writers who submitted to this anthology managed three things that I wanted, but not the fourth.

Even so, the quality of fiction submitted was so high that I could have edited two completely different anthologies. Even when writers picked the same topic, the stories were vastly different.

The stories I chose do everything I asked for and one thing more. All of these stories touched me emotionally. I edit for emotion. While I love a well crafted intellectual tale, I don't remember that story a few months later. When I read a story that touches my heart, I remember it forever.

All of the stories in Hidden in Crime touched my heart. The stories run the emotional gamut. They go from bleak to charmingly light-hearted. Some stories made me cry. Others made me laugh out loud.

I design all of my anthologies from front to back. I hope that you'll read them as if they're a novel, and go from beginning to the end. If you do, you'll find that lighter stories follow the darkest ones. You will go on an emotional roller coaster ride, the same way you would in a novel.

But if you choose to read out of order, you're on your own. I'm not going to tell you up front whether a story will break your heart, restore your faith in humanity, or do both. I want you to be as surprised by the fiction ahead as I was when I first read these tales.

I've packed fourteen of the most memorable stories I've ever read for Fiction River into Hidden in Crime. I think you'll enjoy them all.