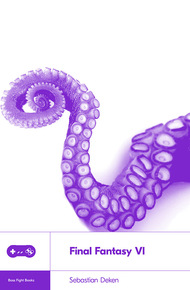 Sebastian Deken is a writer and musician born in St. Louis, Missouri. He studied music and French literature at Washington University in St. Louis, then went on to receive his MFA in nonfiction writing from Columbia University School of the Arts. He currently lives in New York City with his husband, Brett White.

Terra the magical half-human. Shadow the mysterious assassin. Celes the tough, tender general. Kefka the fool who would be god. Each of the many unforgettable characters in Final Fantasy VI has made a huge impression on a generation of players, but why do we feel such affection for these 16-bit heroes and villains as so many others fade? The credit goes to the game's score, composed by the legendary Nobuo Uematsu.

Armed with newly translated interviews and an expert ear for sound, writer and musician Sebastian Deken conducts a critical analysis of the musical structures of FF6, the game that pushed the Super Nintendo's sound capabilities to their absolute limits and launched Uematsu's reputation as the "Beethoven of video game music."

Deken ventures deep into the game's lush soundscape—from its expertly crafted leitmotifs to its unforgettable opera sequence—exploring the soundtrack's lasting influence and how it helped clear space for game music on classical stages around the world.

What I love about Boss Fight Books is their authors' ability to zero in on what makes our favorite classic video games so great. Sebastian Deken's Final Fantasy VI takes this a step further by using newly translated developer interviews and Deken's own knowledge as a musician to analyze how the game's legendary score drives home its themes and character arcs. The result is one of the most unique and personal volumes in Boss Fight's library. – David L. Craddock

Of the game's protagonists, Shadow is the most laconic (excepting Gogo, the agender mimic who speaks three lines to introduce themself, then never again). He floats in and out of the party at his own discretion, sometimes only participating if he's paid. By way of introduction, we're told "He'd slit his mama's throat for a nickel." A player can start and finish the game without learning a thing about Shadow's complicated history; nothing about it is explicit in the first half of the game. If you play your cards wrong, he'll disappear on the Floating Continent—and you'll never learn who he is. Shadow is more than a nameless mercenary. He's a man on the run from himself.

His given name is Clyde. As a young man, he formed a train-robbing duo with his friend Baram. As they celebrated a particularly successful heist, they jointly adopted "Shadow" as their nom de crime. The next job went horrifyingly wrong: The two were on the run, in danger of being caught, and Baram was mortally wounded. He begged Clyde to take a knife and put him out of his misery, but Clyde was shaken by the idea and couldn't bring himself to kill his friend. He sprinted away instead, leaving Baram to die alone, in pain, crying for mercy. The guilt still racks Shadow when the player meets him more than a decade later.

Shadow's past bubbles up through a series of achronological, randomly occurring dreams, only viewable in the anything-goes second half of the game. These complement Relm's, and only after seeing into both characters' pasts can the player finally trace the line from father to daughter.

In one dream, Clyde stumbles, half-dead, into a familiar village square, where a dog finds him and fetches a young woman for help. In another, he is walking away from a familiar home—the very home Relm shares with her grandfather, Strago. His dog follows him out of town. "You came to fetch me," Shadow says. "But I won't be going back. I want you, and the girl, to live in a peaceful world." He keeps the dog, but orphans his daughter quick as a knife slices.

In a final nightmare—I can't help but think must be recurring—Baram implores Clyde to join him in death.

To paint Shadow through music, Uematsu pays homage to Ennio Morricone's work, specifically from the Dollars trilogy—A Fistful of Dollars (1964), For a Few Dollars More (1965), and The Good, the Bad, and the Ugly (1966). He mashes up elements from each of these three movies' theme songs (the omnipresent whistle, the strum of a guitar, the mouth harp) to create an instantly recognizable reference that captures Shadow's withdrawn, prickly personality, recalling Clint Eastwood's iconic stone-faced screen presence. He doesn't wear a poncho and smoke cigarillos like Eastwood, but, like a stock character from old Westerns, he does have a background in train robbery. Then there's the connection with Eastwood's role, the Man with No Name: Shadow didn't just adopt his name to hide his identity; in the original Japanese script of FF6, Shadow tells the other heroes, "I'm a man who threw away his name." (Ted Woolsey translated this line for the SNES as "I've forsaken the world.") Shadow wants to become no one.

A Fistful of Dollars was an unlicensed remake of Akira Kurosawa's Yojimbo (1961), about a dark-robed ronin. This cowboy music, repurposed for a mysterious ninja, traces a line back to Kurosawa, who himself borrowed heavily from American Westerns. Uematsu acknowledges and exploits this loop of references to create a razor-sharp portrait: Within a few measures, we learn that Shadow will be enigmatic, distant, and mercenary—and that he's capable of impressive acts of heroism.

Shadow's special ability in battle is "Throw." He can toss shuriken, knives, and short swords at enemies to cause massive amounts of damage. This talent makes sense for a ninja, but also for Shadow's character: He can throw items away in battle, including the game's most powerful and priceless weapons. He threw his partner, his daughter, and his name away. One way or another, he throws himself away. His "Throw" allows him to keep as cool a distance from his targets as he keeps from the other heroes, and it acquits him of delivering a fatal wound face to face.

Unexpectedly, Shadow performs several acts of generosity and self-sacrifice. When prodded, he offers taut advice on love and grief to other characters. He helps the martial artist Sabin, a total stranger, infiltrate the Imperial base at Doma. He (usually) sticks with Sabin and Cyan to board, and escape from, the Phantom Train—a terrifying, sentient manifestation of death (and an unsubtle callback to Shadow's past). On the Floating Continent, he saves a life—that of Celes, the former Imperial general and onetime soprano. Then he stays behind to stymie Kefka so the other heroes can get away safely.

Shadow and Relm are pretty different: Relm is "forests, water, light," and her father is a shade who "comes and goes like the wind." Light opposite dark. Wind through the trees and over the water. They are different but entangled. The up-and-down eighth notes in the father's music have the same nose as those in the daughter's (figure 3.4), but the overall resemblance is thin—different rhythms, different placement, different dispositions. The F-sharp major key of Relm's theme is just a step away from Shadow's E minor—very close—but the keys have no real relationship with each other outside their proximity. Shadow and Relm come so close to each other in-game—they can explore together and fight together, if the player wants them to, and when they are idle they hang out with the rest of the crew belowdecks in an airship. But they never speak or interact. Related, but never relating.

 Figure 3.4 "Shadow" from Final Fantasy VI, mm. 5–8 (whistle). The two bracketed passages reflect their lettered counterparts in Relm's theme. They have extremely similar melodic outlines, though their rhythms and meter are reworked.

During the escape from the Floating Continent, you have a choice: You can make the heroes jump to their airship as quickly as possible, leaving Shadow behind to die, or you can risk it and wait for him before you take the leap—he catches up mere seconds before the fall. The choice is brutal: On the first playthrough, you don't know what will happen if that countdown clock reaches zero. Will Shadow show up? Will the heroes die waiting for him? If they die, will you have to hack your way through the punishing Floating Continent stage again? If Shadow is left behind, will he find his own way to survive? The cruelty of this choice mirrors the awful choice that Clyde had to make about Baram: Will you risk yourself, shaking with anxiety, for mercy on your friend—or will you cut and run?

The choice is real: Shadow will disappear from the game if the player doesn't wait. I didn't wait when I first played through, and I felt his disappearance in my gut for the rest of the game. I hoped to find him somewhere in the ruined world, but all I found was a ghost in my roster and a conspicuous absence during the game's curtain call. It haunted me, in its own little way.

If he lives through to the final battle, Shadow confesses to Kefka that he finally understands friendship and family. That's why he chooses to fight. But after Kefka is defeated, as his tower is collapsing, there's no more fighting to be done. His last big job, as professed in his dream—to leave his daughter Relm in a peaceful world—is complete.

And so Shadow goes on the lam for the last time, lagging slightly behind his comrades, then nestling himself unnoticed in a corner. He knows his death will go unacknowledged and unseen, just as his suffering friend's did. "Baram! I'm going to stop running. I'm going to begin all over again…"