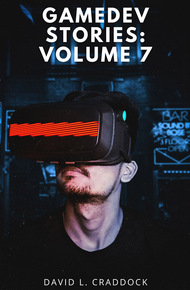 Author David L. Craddock is back with more interviews from his 18+ years writing about the history of video games. In the seventh volume of GameDev Stories, Craddock gathers interviews with Gail Tilden, Nintendo Power's first editor-in-chief and one of the marketing geniuses behind the North American launch of the NES; the Oliver Twins, two of the most venerated game designers in the UK and the industry at large; and much more.

I've been putting together the GameDev Stories series as much to have easily accessible records of my research as for any other reason. What I enjoy most about mapping out each volume is choosing a wide variety of interviews—and selecting never-before-published ones—to appeal to anyone who enjoys playing and/or making games. This is one of my favorites. – David L. Craddock

I've never cared about the mail as much as when I subscribed to Nintendo Power. As a kid, I would race home after school and hope to see a new issue of Nintendo's colorful kid-friendly periodical lying on my bed. That's where Mom would put it so I'd see it.

Like many subscriber, I associated the dapper, bowtie-wearing Howard Philips with Nintendo Power. He was the "Howard" of Howard & Nester, Nintendo's long-running comic designed as a way to share information about gaming as a hobby, or a particular game. But Howard was more than a mascot. He was "the Gamemaster," his official title at Nintendo of America. He was also one of two powerhouses behind the magazine.

Gail Tilden does not get her due for the influence she had on not only the tone and direction of Nintendo Power, but her efforts at Nintendo before, during, and after the magazine's crucial first decade. She was part of the vanguard that launched the Nintendo Entertainment System in North America, touching everything from re-branding (Famicom to NES, cartridges to Game Paks), to the kiosk displays in malls that won the hearts and wallets of so many shoppers, to creating a frothing demand for Pokémon in the 1990s. During her time as Nintendo Power first editor-in-chief, she had a hand in every page of every section of every issue, ensuring the experience would be equally informative and entertaining for the millions of subscribers who, like me, anticipated every issue.

I talked with Tilden about how she came to Nintendo of America, working alongside then-president Minoru Arakawa, the influence she and Howard had on Nintendo Power, and more.

David L. Craddock: What set you on the path to Nintendo?

Gail Tilden: I was working at Britannia Sportswear after I got out of college. I got into the marketing department there. Then I had another job at a small agency, but that my old boss at Britannia asked me to join her at Nintendo. She was going to be on maternity leave and needed someone quickly and asked me if I'd come join her. That was in July 1983.

Craddock: What was the interviewing process like at Nintendo of America back then?

Tilden: There were only about 50 people, maybe slightly more than that. Most of them were in arcade-game assembly. So really, the front office, if you will, was probably 20 people, probably less than that. I had an interview with her boss, Ron Judy. It was kind of normal: submit your resume, come over for an interview, and then get hired.

Mr. Arakawa was the president. When I was hired, I was working with a woman named Debra Simmonds, and her boss was Ron Judy. We had an assistant named Lisa Chidiac. We were the marketing team. Those four people made up a significant number of the front office and Mr. Arakawa always was very close to marketing in terms of reviewing concepts and having a point of view or selecting which games were going to be featured and what was going to get the largest portion of a marketing budget. He was very interested in what was happening and had a huge sense of what the products were, but he relied on people like Howard [Phillips] to tell him what games were going to be great, what were the best features. He was pretty astute at critiquing marketing and advertising and whether we were bringing those features forward.

Craddock: In Blake Harris's Console Wars book, he described Mr. Arakawa as very quiet and direct. How would you describe him?

Tilden: When Blake was writing the book, I spent a lot of time with him. I would venture to say. My daughter goes to Colorado College, and we went to Colorado and did a talk on the book, so I'm very familiar with it. What the issue was about the way he presented Mr. Arakawa was that Mr. Arakawa was not willing to speak for himself. It's just rather touchy to take part in that kind of book. You don't know what the outcome is going to be. So I think Blake would say his characterization was just mostly based on hearsay [from those who worked with Mr. Arakawa].

Mr. Arakawa was extremely personable, fun, and considered everyone in the office as a family, something that is a little bit of a mix of a Japanese style and an American style. He went to MIT; he was in the US when he was young and then went back to Japan and came back to the West Coast. He was actually in Vancouver when he was asked by his father-in-law [the late Hiroshi Yamauchi] to start Nintendo of America. So he certainly had a lot of Western leadership management style as well. He also has an amazing sense of humor. He was hilarious and really inspiring to all those people who had worked there for a long time. We would always joke about him. He would walk in and say things like, "We can have a marketing campaign tomorrow and sell three million units. You can do it," you know. So we would imitate him, like, "You can walk off a cliff and you'll succeed" or something.

He was so inspiring, and everyone wanted to please him and do our best. He tried to bring the best out of people and let them go much farther than you might imagine for people who were kind of building an industry, but within our disciplines. Certainly, there were people who were more experienced in certain areas. I had never started the magazine before. It was really great, and I see him as my great mentor. He had a thing where it didn't matter what level you were at [in the company]. If we were in the middle of a planning meeting and really concentrating on what games were going to get promoted or marketed or whatever, and he knew that some guy in testing or customer service or whatever was really a pro at a game, he would just call them in and [ask for their input]. There's someone I have in mind: Henry Sterchi. He's still in the industry, and he started at Nintendo when he was 17. Mr. Arakawa said in a meeting, "We'll call Henry. Henry, tell us about Killer Instinct. What's good about it? Will people like it?" Those opinions were extremely important in building his overall picture of what a product was like.

I can't say enough about him. In the end. In later years, there were people who, as the company got bigger, their mentor may have been Peter Main or a Howard Lincoln. I was Mr. Arakawa's girl. It was clear that I was, and I am, his biggest fan.

Craddock: Before you did anything with the newsletter and eventually the magazine, you worked on branding and marketing efforts for the NES. I've read so much about how difficult it was for Nintendo to get a foothold in America, so I'd love to hear about that from your experience.

Tilden: We had Game & Watch and these little tabletop games we were marketing. We really thought that the Famicom was fun. Some of us were able to get a Japanese system modified to play on our American televisions. The games really seemed like they were getting closer to the arcade experience, which was what everybody was looking for. In order to launch that system [in America], we did some consumer research. We thought kids seemed enthusiastic. But we asked the researcher, "They seem pretty enthusiastic. What do you think?" And they're like—this is one of the quotes—"I've never seen anyone launch a product that had this reaction." Meaning that what we thought of as enthusiastic for kids was really just a pretty average response [to the researcher]. But we believed, and Mr. Arakawa certainly believed, that what was happening in Japan was certainly a good indicator.

The decision was made to [launch in] New York, and that New York would be an opinion leader for the rest of the country. I was the marketing communications manager, and Ron Judy was sales and marketing. We were identifying and interviewing all these big ad agencies who were just like, "Video games are so over. You're so small. We're not interested in you." We had all kinds of reactions, but ultimately, we went with a company called Geers Gross, who had been involved with LJN Toys, who had just had a big hit with wrestling action figures. They created the campaigns and marketing materials, like that poster that said "The Nintendo Game Plan" that had games on it, and doing mall tours all around the New York area to show the product to people. The one thing that we had the hardest time with was getting any press at all, really. The video gaming industry had been dead, and it almost put Mattel under, so we really couldn't get press to get excited about our introduction.

We did a lot of grassroots stuff. We put displays in all the stores and did TV campaigns in order to get the product to sell. I handled everything, from supervising the packaging and identity and naming all the products, to editing all the manuals and everything that the consumer was going to see and touch, to being the person [on site] in New York. We had a couple other people back in Redmond. It was a huge effort in a rather short period of time, and those agencies in New York were our arms and legs.