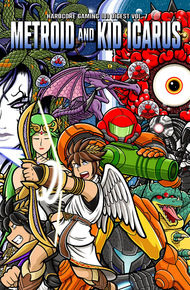 Nintendo's Metroid series has become one of the most influential in the video gaming sphere, to the point where it's responsible for the whole "Metroidvania" subgenre. Learn about the history of this sci-fi classic, as well as its star Samus Aran, in this Nintendo-themed HG101 digest. Also included is coverage for Metroid's spiritual brother, Kid Icarus, as well as other lesser known (but still beloved) Nintendo classics like Punch-Out!! and Balloon Fight, and other obscurities like Joy Mech Fight, The Mysterious Murasame Castle, and Devil World!

I have a soft spot for compilations that gather information on a beloved game and a lesser-known one. Sure, Nintendo diehards know Kid Icarus, but it's less of a known quantity to the mainstream because, like so many of Nintendo's properties, it hasn't seen a new entry in years. Travel back in time with this excellent tome. – David L. Craddock

Nintendo released the Famicom Disk System in March 1986, with the intention of it serving as a way to get around the technical limitations of ROM cartridges. Early Famicom releases tended to be pretty simple arcade-type games, but the expanded storage capacity and ability to save games allowed for more complex experiences, similar to what could be found on home computers. Its marquee title was The Legend of Zelda, the seminal game that combined fantasy role-playing with colorful characters and huge worlds.

Obviously Nintendo needed more than one game to sell its new hardware, so they worked on developing a few other titles that also played to the strengths of the system. One of the other most popular of these was Metroid, directed by Satoru Okada, who had previously worked on Balloon Fight and Wrecking Crew, and later went on to helm Kid Icarus, Famicom Wars, and Super Mario Land. Much of the design of the game is attributed to Yoshio Sakamoto, who had previously worked on Donkey Kong Jr., as well as Balloon Fight and Wrecking Crew with Okada. Other team members include Hirofumi Matsuoka, a graphic designer who later went on to direct Mario Paint; Hiroji Kiyotake, the artist credited with all of the original designs, including the franchise's protagonist (he later also designed Wario); and Makoto Kanou, the scenario writer.

While the open-ended adventuring spirit of Metroid was similar to Shigeru Miyamoto's Zelda, it differed in two major ways: first, it used a side-scrolling perspective, and second, it featured a science-fiction theme, heavily inspired by Ridley Scott's 1979 movie Alien. The developers didn't know it at the time, of course, but Metroid (along with Zelda) codified many genre conventions, and its influences can still be felt decades later. The series name itself comes from a combination of "metro", bringing to mind dark subway tunnels, and "android".