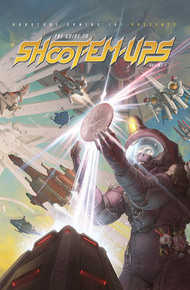 HG101 Presents: The Guide to Shoot-Em-Ups Vol. 2 by Kurt Kalata

Few writers are as versed at recounting the history of entire genres of video games as Kurt Kalata. For fans of shoot-em-ups wistful for the days of arcades, this volume of history and stories will make an invaluable addition to their libraries. – David L. Craddock

In the previous volume of The Guide to Shoot-Em-Ups, we covered the works of Compile, Hudson, Irem, and Technosoft. This volume actually goes back even further to look at one of the most important shoot-em-ups ever made: Namco's Xevious. Prior to this, space shooters were in the vein of Taito's Space Invaders, which generally took place on a single screen as you fired at waves upon waves of enemies. Xevious, conversely, introduced a scrolling playing field, along with mechanics that would set the template for an entire genre over the next few decades. We're also looking at the rest of Namco's catalog, though despite their early work in the field, they weren't quite as prolific.

There are a few other big name developers covered here as well, with one of the main ones being Toaplan. They had an abundant output during much of the 1980s and early 90s before their eventual closure. The staff from that company scattered to several other developers, including Cave, one of the creators of the modern bullet hell shooter. We're also looking at the works of Raizing, founded by members of Compile around the time they shifted away from shoot-em-ups, so this complements the games featured in the first volume.

The works of Psikyo are also featured here. They're another company who put out a whole lot of titles in the 1990s, with games like Gunbird and Strikers 1945, as well as titles from its predecessor studio, Video System. These might just be the most well-known shooters at the moment, since the rights holder has been porting their games to modern platforms.

Elements of Raizing's work can also be found in Cave games – one of the main aspects these books are emphasizing is how connected all of these releases are, by virtue of them sharing much of the same staff. Further, both Raizing and Psikyo were trying their best to survive in an arcade landscape that, during most of the 1990s, was being dominated by fighting games, and you can see this with their emphasis on creating unique characters (and even silly stories).

We've also squeezed in a bunch of other notable games, mostly console titles, including Vic Tokai's Battle Mania / Trouble Shooter, the Mega Drive cult classic Eliminate Down, and a few others. Plus, there have (unexpectedly!) been some new developments in the Aleste series, which we've covered here as well.