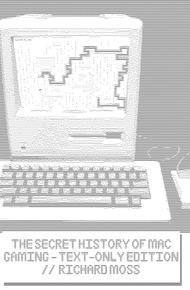 Richard Moss is an award-winning writer and journalist based in Melbourne, Australia. He has written extensively about video games and technology for more than two dozen publications, including Ars Technica, EGM, GameDeveloper.com, Mac|Life, and Rock Paper Shotgun. He is the author of The Secret History of Mac Gaming and Shareware Heroes: The renegades who redefined gaming at the dawn of the internet as well as a producer/co-writer on the upcoming documentary FPS: First Person Shooter. Richard also produces the podcasts Ludiphilia and The Life and Times of Video Games.

The Secret History of Mac Gaming by Richard Moss

The Macintosh changed video games. It challenged the medium to be more than child's play and quick reflexes. It made human-computer interaction friendly, inviting, and intuitive. Mac gaming led to much that is now taken for granted by PC gamers and spawned some of the biggest franchises in video game history — including Myst, Halo, and SimCity. It allowed anyone to create games and playful software with ease, and gave indie developers a home for their products.

It welcomed strange ideas and encouraged experimentation. It fostered passionate and creative communities who inspired and challenged developers to do better and to follow the Mac mantra: 'think different'.

Written by award-winning journalist and game historian Richard Moss, The Secret History of Mac Gaming draws on a combination of archive material and around 80 interviews with key figures from the era to tell the story of those communities and the game developers who survived and thrived in an ecosystem that was serially ignored by the outside world. It's a book about people who followed their hearts first and market trends second, showing how clever, quirky, and downright wonderful video games could be.

Growing up, I had a friend who played games on a Mac. I played on DOS. We played the same games—Doom, StarCraft—but he got his hands on those games a year after I'd scoured every corner of them and moved on to something else. Richard Moss's excellent Secret History of Mac Gaming unearths the surprising and rich history of gaming on a platform most DOS players associated with anything and everything else. How wrong we were, and how wrong I was. – David L. Craddock

I set out on this journey in July 2014 with a simple goal: I wanted to show that the Mac was important to the annals of video game history, and to share the stories behind the wonderfully creative and imaginative 'Classic' Mac era — from the Mac's mid-1980s introduction to the early 2000s. I hoped to shine a spotlight on people and ideas that have never received the attention they deserved. I believed that 'Think Different' was more than a marketing tagline, and that Apple's famous 1984 ad — shown in the prime Super Bowl advertising slot ahead of the Mac's January 1984 introduction — was not just creative marketing spin. I felt that the Mac really did change everything, that its users really did think differently and produced software and art that was revolutionary.

In the process of pursuing that goal, I've discovered a community more vibrant, diverse, creative, and intelligent than I had ever imagined.

Mac game fans were no angels — portions of them abused and derided their heroes for petty reasons such as delays, cancellations, or working with a perceived enemy (Microsoft), just like game fans elsewhere — but taken on the whole they were remarkably generous and accepting. They embraced weird ideas and supported originality. The community was small enough that even in the late 1990s, when PC and console gaming were growing huge, they could talk directly to their game development heroes.

In a world where Apple is now a major lifestyle brand and its products are mainstream accessories and appliances, it's also useful to remember a time when the Cupertino company was the underdog — when its only followers were the true believers of the Macintosh way, of this idea that computers should 'just work' and that even serious software should be pleasant to use. It's valuable, too, to see what people achieved when they were absorbed in that aesthetic.

When the rest of the personal computing world had low-resolution, blocky graphics with just a handful of garish colours and a bewildering keyboard-driven text-based interface — which required a considerable cognitive load just to learn to a point of basic functional understanding — Macintosh took its own path.

It adopted a powerful processor that none of the competition was (yet) using and a relatively high-resolution screen of 512 by 342 pixels, which made the standard 300 by 200 display format seem hopelessly primitive. It eschewed crappy colours in favour of crisp black and white, and introduced a graphical interface consisting of windows and icons that resembled actual files and folders. It took the focus away from the keyboard and instead put it on the pointer — a proxy for a hand or finger that was operated by a device called a mouse, which a user held in their hand and slid around the table. Whereas prior personal computers rendered all text in a single font, the Mac had different fonts and formatting styles, and documents actually appeared on the screen exactly as they would when printed on paper. And it made pull-down menus standard across the system so that basic operations could always be accomplished with ease even if a user forgot the keyboard command.

These features inspired people. As did the software that Apple's engineers wrote to highlight them. Art and word processing applications MacPaint and MacWrite and the desktop-like Finder, together with the control panels and desk accessories that aided with smaller tasks — defined not only a visual aesthetic but a whole design language. A new way of thinking.

Many of those who embraced this new paradigm accomplished incredible things. Just in the games space, they built the world's first multimedia authoring tool, designed almost tangible interactive places in which the interface — the barrier between player and world — disappeared, and made adventures that captivated millions. They made games that looked like interactive cartoons or played like interactive movies. They crafted innovative first-person exploration and shooting games that broke boundaries in both technological and storytelling realms. They made games that presented such intuitive simulations of real-world or fantastical systems that they changed people's lives.

Most of all, the Mac game development community produced games that were different. Games about corporate executives fighting off the robot apocalypse while scooting around on a swivel chair, and about paper airplanes in magical houses filled with hundreds of rooms and ordinary objects that bounce all of their own accord. They knew their fans, and their fans knew them. They were independent, and even the successful ones were poor, but they were loved.

This book is about those game developers who chose to swim in the little Macintosh pond rather than the big sea of Windows PCs — developers who poured their hearts and souls into the products they created, often innovating along the way. And, to a lesser extent, it's about the fans who supported and adored them — who made their own e-zines and news websites in lieu of wider media coverage, and who eagerly joined in on the creative process by adding their own sounds, graphics, and levels to games or by extending, modifying, interpreting, or playing the games in other ways that their original developers never could have imagined.

This is the story of the people who believed the Mac was neither the serious machine that Apple's marketing decreed nor the toy that the computer snobs so disparagingly labelled it, but rather as a dream machine that could cross between worlds. A machine that had the capacity to teach, inform, inspire, and delight any user, whatever their background and occupation, and a machine that had changed the world.

Well into the 2000s — and to an extent still as I write this in early 2017 (and even as this text-only flavour of the expanded edition comes out in 2022) — the broader games scene had a running joke that the Mac didn't have games. The truth, however, was that most people who weren't part of the club didn't know where to look. Mac gaming's vibrancy and creativity was the Mac's best-kept secret. This book is about letting that secret out.