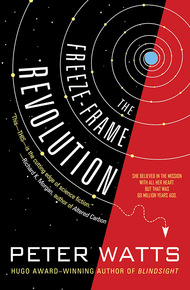 Peter Watts is a former marine biologist and a current science-fiction author. His debut novel in the Rifters series, (Starfish) was a New York Times Notable Book, and his novel (Blindsight) has become a required text in undergraduate courses ranging from philosophy to neuroscience, and was a finalist for numerous North American genre awards. His shorter work, including Beyond the Rift, has received the Shirley Jackson, Hugo, and Aurora awards. Watts's work is available in twenty languages and has been cited as inspirational to several popular video games. He lives in Toronto.

The Freeze-Frame Revolution by Peter Watts

How do you stage a mutiny when you're only awake one day in a million? How do you conspire when your tiny handful of potential allies changes with each job shift? How do you engage an enemy that never sleeps, that sees through your eyes and hears through your ears, and relentlessly, honestly, only wants what's best for you? Trapped aboard the starship Eriophora, Sunday Ahzmundin is about to discover the components of any successful revolution: conspiracy, code—and unavoidable casualties.

No one does SF quite as dark as Peter Watts, nor SF as hard. There's a darkness in technology, and in the universe itself, and no one articulates it quite like Watts does. – Lavie Tidhar

BACK WHEN WE FIRST SHIPPED OUT I played this game with myself. Every time I thawed, I’d tally up the length of our journey so far; then check to see when we’d be if Eriophora were a time machine, if we’d been moving back through history instead of out through the cosmos. Oh look: all the way back to the Industrial Revolution inthe time it took us to reach our first build. Two builds took us to the Golden Age of Islam, seven to the Shang Dynasty. I guess it was my way of trying to keep some kind of connection, to measure this most immortal of endeavors on a scale that meat could feel in the gut. It didn’t work out, though. Did exactly the opposite in fact, ended up rubbing my nose in the sheer absurd hubris of even trying to contain the Diaspora within the pitiful limits of earthbound history. For starters, the Chimp didn’t thaw anyone out until the seventh gate, almost six thousand years into the mission; I slept through almost all of human civilization, didn’t even wake up until the fall of the Minoans. I think Kai may have been on deck for the Pyramid of Cheops, but by the time Chimp called me back from the crypt we were all the way into the last Ice Age. After that we were passing through the Paleolithic: five thousand gates built—only three hundred requiring meat on deck—and we’d barely finished our first circuit of the Milky Way. I gave up after Australopithecus. It had been a stupid game, a child’s game, doomed from the start. We were just cavemen. Only the mission was transcendent. I don’t know exactly what moved me to pick up that kiddie pastime again. I’d learned my lesson the first time around, and space itself has only grown vaster in the meantime. But I gave it another shot, after everything went south: called up the clocks, subtracted the centuries. We’ve been around the disk thirty-two times now, left over a hundred thousand gates in our wake. We’ve scoured so many raw materials that God, looking down from overhead, could probably trace out our path by the jagged spiral of tiny bubbles sucked clean of ice and gravel. Sixty-six million years, by the old calendar. That’s how long we’ve been on the road. All the way back to the end of the Cretaceous. Give or take a few millennia, the revolution happened on the day one of Eriophora’s pint-sized siblings punched Earth in the face and wiped out the dinosaurs. I don’t know why, but I find that kind of funny.