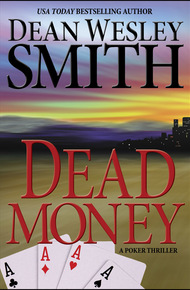 Poker: a high-stakes, deadly serious professional sport. Doc Hill knows all too well the risks involved with the sport. Or so he thinks. But when one of the greatest poker players of all time dies, the stakes rise even higher. Doc must solve an increasingly frightening series of murders—and win the biggest tournament of his career—before he finds himself forced to fold his cards for good.

A fast-paced thriller that delves deep into the enticing world of high-stakes poker, Dead Money raises the risk of the political thriller to create an exciting new genre—political poker thriller.

As a ghostwriter, USA Today Bestseller Dean Wesley Smith has written over thirty thrillers under a wide-variety of names. In other years he made his living as a professional poker player. He had now "Laid it down" on the table under his own name and I am so glad that he did. Dead Money will make you never want to go near a poker table again. Because if you do, you won't dare look away. And with Dean doing the writing, you won't be able to. – M.L. Buchman

Silence, the absolute worst thing a pilot can experience at seven thousand feet in a single-engine Piper 6XT. A moment before, the engine had filled the cockpit with a solid rumbling, a vibration-filled sound that Carson Hill knew from hundreds of hours of flight time.

The engine-monitoring system panel hadn't given him a warning. The plane had shaken with what had felt like a small explosion. Then everything on the control board had just snapped down to zero. Black smoke had poured out of the engine compartment, covering the front windows with a thin, black film.

Now the smoke was gone and through the film he could see the tree-covered ridgeline directly ahead.

The slight creaking of metal, the faint sound of the wind rushing past the six-seater's windows. Nothing else broke the deadly quiet.

He forced down the panic threatening to overwhelm him.

"Goddammit! What the hell happened?" His voice seemed extra loud.

He took a deep breath. Losing control now would just make sure he died.

In his hands, the plane's controls felt heavy, unresponsive. His dead-stick training was from a book and a few sentences from his original flight instructor over three decades ago. He had never actually flown a plane without a working engine.

Around him, the dark blue September sky contrasted with the green forests and brown rocks of the Idaho wilderness below. Normally, he loved this easy flight. He'd done it every year at the same time for longer than he wanted to admit. Now everything below him looked like a nightmare in the making, ready to reach out and tear him apart.

The ridgeline loomed ahead, a wall of death. He wasn't clearing that ridge.

He forced himself to take a deep breath. Then, with shaking hands, he fought to get the plane into a very slow turn.

Nothing wanted to move.

The trees ahead filled everything in his sight.

He kept fighting the controls, forcing the plane to turn by almost sheer will. It took every bit of his strength, as if the plane had a mind of its own and actually wanted to crash into the trees and rocks.

Everything seemed to slow down.

Finally, the trees were no longer growing threats filling his vision, but instead were flashing past the wing's tip.

He bet he didn't miss the tops of the pines by more than a few feet.

Somehow, between deep, sobbing breaths of oil-tainted air, he got the plane leveled and back over the deep valley, headed downstream. Sweat ran down his face and into his eyes as he tried the restart sequence.

With almost no control, no engine, no place to land but into trees and rocks, he was as good as dead.

He pushed that thought away and grabbed the radio mike. "Mayday! Mayday!"

No response from either the McCall or Cascade, Idaho airports.

He clicked on the global positioning emergency beacon. At least Search and Rescue would find him quickly.

Ahead, the narrow valley floor closed down tighter and tighter. He couldn't be more than a thousand feet above the stream and dropping faster than he wanted to think about. It was taking every bit of his strength to keep the plane flying and not stalling.

He wiped the sweat off his face with his sleeve and tried to get a good look at what lay ahead through the oil-smeared window. Sharp rocks and thick forests covered everything. At this speed, and without any real control, the plane would be torn apart on impact.

"Need an opening," he said. "Just give me an opening." His voice sounded loud and strained in the silence of the cockpit.

The valley narrowed ahead into a rock canyon, but over the edges of the rocks he could see a meadow beyond. If he could make the meadow, he might have a chance.

He tried to focus on the open area where the sun was shining, pushing the plane past the dark shadows of the rock canyon and into the light.

But he was dropping far too fast.

He tried feathering the controls to keep the plane up, but nothing seemed to work. Instead of something responsive in his hand, it felt like he was pushing against a stuck handle and pedals.

The rock walls now loomed ahead, a tiny opening leading to the sunshine beyond.

It was going to take a lot of luck to fit the plane through that narrow canyon opening. And after thirty-three years of playing professional poker, he didn't much believe in luck.

Then, quicker than he realized possible, he was in the canyon, the rocks flashing past. Ahead, the meadow seemed to call to him, the bright sunshine a beacon.

A tip of one wing caught the rock cliff face.

Before Carson had time to react or even cover his head and face, the small plane slammed into the rock wall.

Steven leaned against a tall pine in the shade, trying to stay cool, watching impassively as Carson Hill's plane struggled to stay in the air.

From Steven's position on the top of the major ridgeline dividing the Cascade Valley from the central Idaho primitive area, he could see clear to the Middle Fork of the Salmon over thirty miles away. He had picked the spot just for that reason.

The day had turned beautiful, almost hot. He had waited patiently for six hours, slowly drinking bottles of water, until the signal had come in from the device he had planted in Carson's plane that told him Carson had started up his engine at the Scott airstrip deep inside the primitive area.

Steven felt no emotion as Carson Hill's six-seater Piper Cub barely escaped crashing into the hill below him. He simply watched as the plane drifted silently down the valley. Carson was full of all kinds of surprises. He shouldn't have been able to make that turn, not with his engine gone and his controls damaged in the small explosion Steven had set off in the plane's engine compartment.

The hillside below Steven had been the intended crash sight. More than likely the crash would still kill Carson, but it wasn't going to be close enough for Steven to retrieve Carson's key.

Steven shrugged. That was only a slight glitch in his plans. Too bad. He had wanted to take the key from Carson's dead, mangled body. There would have been a nice justice to that. But there would be other keys to give him that pleasure. There had been ten players in that poker game. Nine keys.

Steven dropped the small remote detonation device he had used to set off the explosion in Carson's plane into a three-foot-deep hole he had dug while waiting, then quickly filled the hole back up, covering it with pine needles. No point in carrying the device back down the mountain with him. No one would find it here, and even if they did, it couldn't be traced to him. He had left no detail to chance.

He trusted no one.

He had learned that lesson well.

Carson's key would survive the crash, and even with Carson dead, someone would have the key very shortly, then take Carson's position in the game.

If Steven had to kill that person, as well, so be it.