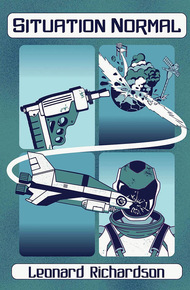 Born in Los Angeles and raised in California, Leonard now lives in New York City where he writes programs (for the NY Public Library, inter alia) and fiction; among his creations are robotfindskitten, Beautiful Soup, RESTful Web APIs, and, of course, Constellation Games (Candlemark & Gleam 2011)

The galaxy's two multi-species superpowers stand on the brink of yet another pointless war. Soldiers, draft-dodgers, smugglers and spies from both sides are rushing towards Cedar Commons, an uninhabited forest planet near the border. Everyone has some plan for fighting, avoiding, or profiting from the conflict.

None of these plans are going to work out: war destroys plans as efficiently as it does lives. But as the visitors to this once-quiet planet discover each other, they'll make new friends, new enemies, and new plans that have a chance to end the war before it causes the collapse of several civilizations.

Beep. Beep. Beep. The neutrino radio suddenly discovered a regular source of the damn things. "Oh dear," said Ethiret. "That sounds like a lot of bombs."

Kol stayed quiet and hoped the neutrinos would take the hint. Ingridsdotter leaned over him and worked the radio. "Actually sounds like a Fist civilian distress signal, sir," she said.

"Distress signal?" said Ethiret, with way too much interest. Kol cursed his luck. In a star system that was screaming with electromagnetic radiation, in the center of a war zone, plummeting through the core of a disintegrated planet, they had found someone asking for help.

"Distress" and "signal" were the magic words as far as planet-huggers were concerned. If they saw someone in trouble in a city, or even on a space station, they'd walk on by, maybe feel a little guilty. But when someone's in trouble in a _spaceship_, you gotta help them out, even at the cost of your own life. And the way this shift was shaping up, Kol's life was the going price for just about anything.