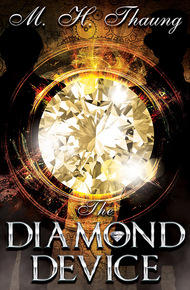 M. H. Thaung grew up in Scotland and has drifted southwards throughout her career in pathology, ending up in a biomedical research institute (as a staff member, not a specimen) in London, England. After dozens of academic publications, she has been tempted to venture further into "What if?" territory where her quirky characters explore outlandish worlds.

After diamond power promises to replace steam, an unemployed labourer and a thieving noble unite to foil an international plot and avert a war.

Alf Wilson resents the new technology that cost him his factory job, especially as his clockwork leg bars him from army enrolment. He daren't confess his unemployment to his overbearing mother. Desperate over the rent, he ends up in a detention cell with a hangover.

Impoverished Lord Richard Hayes maintains his expensive parliamentary seat by a mixture of charm and burglary. During a poorly planned break-in, he inadvertently witnesses a kidnapping. To cap it all, the police arrest him for the crime. At least he's using a fake identity. The real criminals make off with not just the professor who discovered diamond power, but her plans for a diamond-fuelled bomb.

When Rich encounters Alf in the neighbouring cell, he sees an opportunity to keep his noble reputation intact. He persuades Alf he's a secret agent who needs an assistant. This chance association will take them to the oddest locations. But law-abiding Alf's first assignment? Break Rich out of jail.

After Sally left, Rich extinguished the downstairs lights as if he was having an early night. At ten o'clock, he changed into dark, nondescript clothing with concealed pockets for his lock picks and grease.

Exiting his house by the side door, he set his cap at a jaunty angle and strolled casually down the path. He had previously taken care to cultivate a reputation as a lord with irregular habits. Just what irregular habits might have a visitor depart the servant's door at nearly midnight... He grinned. Well, it would deflect attention from his other actions.

The Madeley's house was a half-hour walk away. Although the air was chilly, the smog had lifted a little. That was another advantage of the new diamond-powered technology: less smoke from burning coal and wood. Of course, there wasn't enough of the new fuel for every need, but it was a start. New sources of diamonds would guarantee fame and fortune to anyone enterprising and lucky enough to find them. And here was Rich, tied to Ironfort with barely a florin to his name. He couldn't afford to travel, whether in search of his parents or of diamonds.

No point feeling down about the matter. Maybe someday he'd get lucky on a job. As he patted his lock picks, his gut quivered with anticipation: nights like this made him feel alive.

The route was generally quiet, other than late shift workers trudging home and the occasional street worker seeking a customer. But wait, someone was cursing quietly ahead, accompanied by tapping noises. Surely Rich wasn't about to witness a mugging? He might feel obliged to intervene, and then there would go his plans.

He peered through the smog as he walked on, and then relaxed. Outside a pub, a burly aproned man was trying to attach boards across a broken window.

"Not a good one," grumbled the man, rubbing at a misshapen ear. "Bloody fight broke out in my pub, and by the time the bobbies had dragged the culprits off and stomped broken glass all over my floor... Here's me trying to quietly secure my window in the middle of the night. You ever tried to hammer without disturbing anyone?"

"Not exactly," Rich replied truthfully before walking on.

The Madeley's street was empty of pedestrians. An unmanned steam carriage stood outside one of the neighbouring houses. Rich smirked: they obviously had a visitor who didn't want a cabbie blabbing about their movements. These days, citizens were encouraged to retire early, so as not to waste power. The houses were mainly dark although an intermittent glow moved in a few of the windows. Those would be from security automata's sensors as they patrolled the house or rotated in place, depending on how sophisticated they were. Rich's title ensured that security firms informed him of recent developments, even though he'd quietly sold his own automata last year.

Soon, that would all change. He ambled towards the Madeley's kitchen door but paused when a glint from the front window caught his eye. An automaton? But she said she didn't have one. Holding his breath, he peered through the window.

Damn! Not quite the height of a postbox, the wheeled column glided around the sitting room where he'd taken tea just that afternoon. Its dome-shaped head swivelled and cast a blue glow on its surroundings. He nearly groaned. His talk about home security must have prompted her to rush out and buy one. No wonder she'd looked so thoughtful when he left. If only he'd kept quiet.

He padded back to the main street and walked on. Now what? Ordinarily, he'd have given up for the night, but with the tax collectors on his heels, he didn't have that option.

A nearby door creaked.

Rich glanced around, wondering if someone would depart in that carriage, but the driveway remained quiet and dark. Hang on, a side door was open a couple of buildings further up. Even better, there was no tell-tale glow from any of that house's front windows. Rich had no idea who lived there, but surely it was worth checking out? He crept up the path and slipped inside.