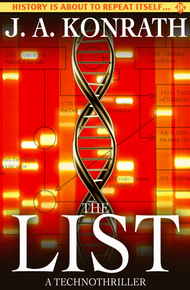 Joe Konrath has written in multiple genres under a variety of pen names, including Jack Kilborn and Melinda DuChamp. Konrath is known for combining suspense with humor, and he's sold over 3 million books worldwide. Visit him at www.JAKonrath.com, and follow him on Twitter @jakonrath.

A billionaire Senator with money to burn...
A thirty year old science experiment, about to be revealed...
Seven people, marked for death, not for what they know, but for what they are...

The List is a bit of a departure for Konrath. It's a technothriller about a

feet, and don't know why.

One of them, a Chicago Homicide cop named Tom Mankowski, has had one of

these strange tattoos since birth. When he investigates a violent murder and

discovers the victim also has a tattooed number, it sets the ball rolling

for an adventure of historic proportions.

To say more would give away too much.

J.A. Konrath has become synonymous with out-spoken, great writing, and thrillers. Joe was one of my "oh, man, I'd love to get" authors for this bundle. The fact that I did still surprises me. That he brought onboard a police-driven techno thriller like The List just makes me ridiculously glad that I was dumb enough to have that initial thought. If you want to alternate between a laugh and stark terror as you double-check your body for unexpected tattoos, Joe's your man and this is your book. – M.L. Buchman

Tom Mankowski, Chicago Homicide Detective Second Class, pushed the chair aside and squinted into the darkness under the desk. The two uniforms who were first on the scene flanked him.

The patrolman to his left flicked on his Maglite, letting the beam play across the head's slack and pale features. Tom righted his lanky frame and turned his attention back to the lounger on the other side of the apartment. The body was bound to the chair with duct tape, torso leaning slightly forward, blood still trickling from the neck stump. All of the fingers on its left hand were severed.

Tom's hazel eyes tracked the carpet in a line from the lounger to the desk. There was a blood trail, and an odd one at that. He had been expecting a pattern of drops indicating the head had been carried. Instead there was a repeating arc pattern.

"I want a door-to-door on this entire floor and the one below it," Tom told the uniforms. "Then sweep the alley and check all the dumpsters. Wear gloves."

"Not anymore. Check all Dumpsters in a two block radius. There's no way the perp left this apartment without getting blood on him. Maybe he ditched clothes or a weapon. Call the district and get four more guys to help, on my authority. You can put in an overtime request tomorrow morning when you give me the reports."

They headed for the door, grumbling.

"Hold on. Other than the front door, did you touch anything when you arrived?"

"Naw. The superintendent opened the door, we saw the vic and called it in. Then we stood around until you showed up to send us on Dumpster duty."

The first guy adjusted his cap. "Oh yeah. I did. The CD player was cranked up all the way. Some classical crap."

"Make sure it's in the report."

Tom dismissed them and turned his attention back to the body. Forcing detachment, he examined the wound to the neck. There were no tears or ragged edges in the skin, just a continuous smooth cut. Tom had never seen anything like it before.

Detective Roy Lewis entered the apartment and handed his partner a Styrofoam cup with a gas station logo on it. At six foot two, Roy was the same height as Tom, but that was their only shared trait. Roy was black, bald, with broad shoulders and a round face sporting a thick mustache. Tom was white to the point of pale, thin and angular, with sandy hair that was a touch too short for a ponytail.

Roy's jacket was dotted with droplets, some of them still snowflakes. It was the first week of April, but winter didn't seem to know that.

"Why is it when I buy coffee, it's Starbucks, and when you do it's Phillips Petroleum?"

"Because I'm a cheap bastard. What do we got here?"

"Vic is a male Caucasian, name of Thomas Jessup. Woman in the apartment below called 911 because blood was dripping from her ceiling."

Roy grimaced at the body, then took a sip from his cup. "Where's the head?"

"It rolled under the desk. I think the perp used some kind of sword. One cut. Clean."

Tom's stomach did a slow roll. Though he'd been in Homicide for six years, he still wasn't comfortable around bodies, especially the messy ones. Bad coffee made the nausea even worse. Tom stuck out his tongue and fingered off a line of coffee grounds. Not wanting to contaminate the scene, he wiped the dregs in his shirt pocket.

"Yeah. It looked awful. That's why I got me a Coke. So what's up with the fingers?"

"Tortured. Perp took them off one at a time, then used twist ties to stop the bleeding. Music was up loud so no one heard the screams."

"Who was this poor guy, make someone want to cut off his fingers and lop off his head?"

Tom choked down the rest of his coffee and put the cup in his jacket pocket. Then he snapped on a pair of latex gloves. His partner did the same.

While they tossed the place, several techies showed up and began to take pictures and collect samples. The ME arrived shortly thereafter, formality making him take the corpse's pulse.

"Should we start CPR?" Roy asked.

The Medical Examiner ignored him.

Tom took the bedroom, and after a few minutes of poking through drawers found out that Thomas Jessup worked at the main branch of the Chicago Public Library. Check stubs put his standard of living at slightly more than average. A bank statement revealed only a few hundred in savings, but bills were paid in full and on time. The heat kicked on automatically, blowing around the strong smell of violent death. Tom checked out the bathroom, and after a thorough search he bent over the sink and splashed some water onto his face. The coffee felt like acid in his gut.

Afterward he joined Roy in the kitchen. "Anything?"

"This guy was a boy scout. No booze, no smokes, no drugs, no fatty foods in the fridge. A ton of books, not one of them with dirty pictures. What'd he do?"

"Figures. You find any girl stuff?"

"Nope. If he had a girlfriend, they weren't intimate. At least not here. No women's clothing, no extra toothbrush."

"Found his wallet. On the computer. Sixty bucks inside. Poor guy just turned thirty. Hey, ain't your big three-oh coming up this week?"

Tom frowned. "Thanks for the reminder."

He looked in the cabinet under the sink and found half a box of garbage bags. They were the more expensive brand with the built-in handle—no twist tie needed. The perp must have brought his own to the scene. An earlier check of the front door didn't show any signs of a break-in. Someone Jessup knew and let inside?

Tom went back into the living room. The asses-and-elbows atmosphere of a murder investigation was in full swing, with almost a dozen professionals stepping over each other to do their jobs. A guy with a portable vacuum picked up hairs and fibers. A woman dusted for prints. A team armed with a spray bottle and an alternative light source illuminated blood droplets on the ceiling. All while a crime scene photographer snapped away and another techie videotaped everything.

In the center of the action, the Medical Examiner—a pale, thin, cadaverous looking man named Phil Blasky—was orchestrating the removal of the body. The duct tape was carefully unwound, cut into one foot strips, and bagged. It would be examined back at the lab. A stretcher, complete with body bag, was wheeled in. Once the body was freed from the chair, two cops donning plastic ponchos lifted it onto the cart.

"Now this is interesting."

The ME was bent over the legs, examining a bare foot. Tom got a closer look.

"I thought it was something he stepped on, but apparently it's a tattoo. It looks old."

"A tattoo? Where?" Tom's voice came out higher-pitched than he would have preferred.

"It's on the pad of the left heel. A blue number, about an inch long. The number 7."

Tom looked at the foot and paled. A lump in his throat made him unable to speak.

"I wonder what that means."

Me too, Tom thought.

He'd seen a similar tattoo. Also blue, about an inch long. The number 5.

He'd been seeing it on a daily basis for almost thirty years.

It was on the bottom of his own left foot.