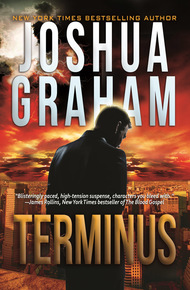 HOW FAR MUST AN ANGEL FALL TO FIND HIS DESTINY?

Having witnessed one too many senseless deaths, Nikolai, a disillusioned Reaper 3rd Class, resigns his commission with the Angel Forces after a tedious century of gathering souls.

Immediately, another division recruits him with the promise of a more rewarding career, and issues his initial assignments: To bring down a few very dangerous threats to the human race. In the process, Nikolai falls in love with one of his targets—Hope Matheson, a woman who will lead thousands astray.

Caught between conflicting agendas, Nikolai chooses to "fall" from his celestial state and become mortal in order to circumvent angel law and be with her. But for angels and humans alike, things are not always as they appear. Still a target, the threat against Hope's life intensifies.

Now, in order to save her, Nikolai must rally the last remnants of his failing supernatural abilities to prevent her assassination, as well as the destruction of an entire city by a nuclear terrorist strike.

But his time and power are running out…

Terminus is a perspective-altering saga that delves into ageless themes of redemption, destiny, and the eternal power of love.

When New York Times bestseller Joshua Graham offered me Terminus for the bundle, my response was "Really?" Besides, I've never been a big fan of supernatural. He said, "Trust me." Which I do, so I did. Joshua proved to me that I'd been thinking way too far inside the box when I was thinking "thriller." Joshua doesn't write outside the box…he doesn't even see the box. Let me say this about Terminus, when it comes to supernatural and Joshua is the man doing the writing? "Yep! Really!" – M.L. Buchman

THREE SECONDS. THAT WAS ALL.

The man in the black leather jacket had looked down for just three seconds to read a text message on his phone. And in the interim, his five-year-old Houdini of a stepdaughter Chloe had unstrapped herself, climbed out of her car seat, and slipped out of sight—nowhere near the doorway of the office where he was to meet his contact.

He scanned the streets, sidewalk, between cars, to the left then right then a quick three-sixty. Despite the thorough sweep, which took all of two seconds, he didn't see her.

She didn't answer, but he spotted her. Way down the street, her auburn pigtails bouncing with each step.

"Chloe! Wait!" He slammed shut the back door of his Focus. Didn't bother to lock it. Ran up the sidewalk—fast. But the little stinker was fixated on a black cat luring her across the imaginary border that separated the gentrified arts district of Carleton Village and the slums of East Brentwood.

The cat bolted around the corner at the sound of the man's agitated shouts. Both hands outstretched, Chloe giggled and ran even faster.

He nearly tripped over an uneven seam in the sidewalk as he ran, his heart going faster than his feet.

A pair of SDPD squad cars with flashing red and blue beacons raced past Birch and came to a screeching halt somewhere around the corner of Lamont.

The little girl turned the same corner and vanished behind the red bricks of the apartment building. Straight onto Lamont.

"Stop, Chloe!" He'd gained but was still several steps behind.

The sound of a policeman shouting filled his head. Could things get any worse? He ran even harder.

It all happened within a matter of seconds.

That's what it took for him to round the corner and make out the figure fleeing the pimped-out Honda Civic that had crashed into a hydrant. The gunman shot at the cops, who now stood behind the open doors of their angled cars.

The man in the black leather jacket leapt at Chloe.

Over his shout, the shouts of the police, the screams of frightened pedestrians, came a deafeningpop!whose impact toppled him.

A sudden chill overtook him as a crimson pool expanded around his face, now planted on the cold concrete sidewalk. He tried to speak, stretched his fingers towards Chloe. Felt nothing but the cold pumping though his entire body.

Life didn't flash before his eyes.

The last thing he saw was Chloe lurching back, her pigtails flailing to the side. As though in slow motion, she was falling.

He never saw her hit the ground.