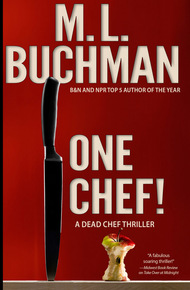 One Chef by M.L. Buchman

Kate Stark owns the #1 cooking network on television. But when a chef dies on her show and a guest judge goes down too, she's the prime suspect.

The dead chef isn't the only problem, it's her past. Five years ago, while a Special Agent in the U.S. Secret Service, she busted a major North Korean currency counterfeiting ring.

From New York TV studios and the top of the Chrysler Building to the Panama Canal and a DPRK smuggling ship, Kate recruits a team as she races to stay alive: a geek, a Marine, her con man twin brother, and a very handsome guest judge.

I love thrillers, but have spent most of my thirty-five novels to date writing military romantic suspense that have been acclaimed as B&N and NPR Top 5 of the year. One Chef is a return for me to the thrillers that I love and makes the latest installment in my "Dead Chef" series. It's a place where television's top food stars and international intrigue are stirred in the same pot and brought to boil. – M.L. Buchman

Marianne Rimaldi scooped a scant teaspoon of the Gran Marnier chocolate ganache and drizzled it atop the single bite of truffle cheesecake. The perfect final bite for the meal she was creating.

A glance at the competition clock.

She plated three more desserts for the judges. The television cameras filming Kate's Kitchen from Hell hovered close by—two on her, two on her competitor as the final seconds ticked away. One glass-eyed lens had an angle that showed the cameraman wasn't focused only on the food.

Precisely according to plan.

Marianne needed the win on America's most popular cooking show, which meant winning over at least two judges. More than that, she lusted after that Kate's Kitchen "Golden Knife" stamp of approval on her career, which required all three judges. For that she wasn't above applying other…ingredients.

The heat of the competition kitchen—the flaring burners and blinding stage lights—had "forced" her to pull at the cross-shoulder buttons of her confining chef's jacket which now hung half open. She wore a loose-necked satin blouse beneath, no bra. She'd chosen a emerald green to contrast with the fire-red of the winner's jacket that she hoped to be awarded at the end of the show. It also stood out well against her unadorned ash-black jacket of a contestant, but she wanted the red.

Marianne had to capture Kate Stark's attention. With her, nothing would count except the food itself.

Kate Stark, the blue-eyed goddess of television food on the nation's most popular cooking network, was also founder and perennial judge of the show. Always front and center on the final panel.

Deep down Marianne didn't want to just win Stark's vote, she wanted to impress the hell out of her. She'd sell her soul to Devil if needs be; it was Kate's Kitchen from Hell after all.

Don't think! Focus on the food…but don't forget the theater.

Marianne was slightly built, so even the least view down her blouse from above was a very revealing one. She bent over her dessert plates and the satin draped away from her body allowing a deliciously cool ripple to course down her front. Her build might be far less substantial than the one that had made her mother such a success on the "wrong" side of Hollywood. But she'd certainly watched her mom and learned what sold. It had been an educational upbringing, if not a typical one.

Two of them were easy.

The guest taster was Zania in the role of the "every person's" palate so necessary for engaging an audience. Someone for the viewers to identify with, among all those professional chefs. Of course her palate was about the only thing on Zania that wasn't extraordinary.

During her intro, Tinsel Town's hot new box-office draw had announced she was centerfolding for Playboy next month in the same sultry breath as promoting her new tight-leather, sci-fi thriller movie. Marianne knew that anyone who pegged Zania as an airhead had a nasty surprise coming; she absolutely knew how to market herself. In all ways.

However, hinting to the actress that there was a chance of some woman-on-woman bonding that would allow Zania to prove just who was the "ultimate female among women" offered real possibilities for leveraging the star's vote. It definitely looked as if she'd bought into Marianne's careful seasoning of her performance with hints and suggestions.

Marianne's own tastes however, were for the second guest judge; the professional chef.

Harold Merritt, with his Michelin-starred Chicago's Merritt restaurant, was both very handsome and notoriously single. Win or lose, she'd make a point of chatting him up after the show. All that broad chest and short dark crew cut gave him a deliciously tough look; she could find many uses for him outside the kitchen, or in it—a little oil, two bodies, maybe some chocolate sauce…

A careful peek from behind the screen of the jet-black dyed bangs of her blond hair revealed Zania and Harold were staring hard at their monitors of the show's live feed rather than gazing benignly over the competition kitchen floor. Their attention was right where Marianne wanted it. On her.

The head judge was a different problem.

Kate Stark—the number one slotted television chef on any network, not just the one she owned—also watched the monitor, but with a slightly amused smile that Marianne would pay a lot to understand. Kate with her direct blue eyes and straight brunette hair that brushed her shoulders and framed the well-defined cheekbones and aquiline nose that made her one of the most attractive faces in television, cooking or not.

She was a notoriously deadpan judge, at least on this show, so that wry smile must mean something.

For good or ill, Marianne would not find the answer to that this side of the judge's table.

The camera that was spying down her jacket still hadn't wavered, so Marianne "accidentally" dribbled a large dollop of the orange-chocolate ganache onto the back of her hand. She licked it clean as if too hurried to wipe it away, making sure the camera could see the pleasure on her face at the success of her own work without losing the angle on her blouse.

Damn! It really was good. Marianne would win on taste alone. But she'd have to play the meal presentation very carefully, spiking the odds even further in her favor with both of the two guest judges.

The competition buzzer sounded as she shaved the last of the zest of a blood orange using a nutmeg rasp. Even as Marianne held up her hands to show she was done, the camera focused in on the cloud of orange dust still sprinkling down like the first snowflakes.

Her shiny dark green satin blouse made a perfect backdrop, which had "somehow" slipped out of another button. Somehow…because she'd enlarged the buttonhole last night to ensure that the button popped when she raised her arms.

She had to close her eyes for a moment to steady herself.

She needed to eat.

Her normal technique of shrugging it off didn't work. Even lowering her arms and subtly bracing herself against the table didn't help clear her head.

Her hands were shaking.

The damned bitch wasn't supposed to taste her own food, not that big teasing lick off the back of her hand anyway. A small taste and she'd have been fine. For a while. Long enough anyway.

Now he could see Marianne Rimaldi wavering from where he and his men lurked in the shadows of the television studio, far behind the judges' table and well clear of any camera's eye.

He held his breath, keeping his men in place. He had a Plan B, but he hated when that happened. Especially because he didn't have a Plan C.

Rimaldi made it through the other competitor's meal service by clutching the edge of her work table, rousing herself to high-five her sous chef, but little else.

The studio emptied. Last shoot of the day. Competitor headed for the bathroom after the judges were done critiquing him. All the main kitchen staff and cameramen drifted out just as he'd planned.

Now he was down to three judges, two cameramen, one floor director, and dumb bitch Rimaldi.

She served the first of her three main dishes. Oohs and ahs and cheerful commentary among the sappy judges.

Franco could feel his fingers digging into his opposite arms where they were crossed. He always hated this part the most.

In Marine Force Recon, they'd parachute down behind enemy lines, observe, assess, and report. They could be weeks on the ground playing cat-and-mouse games with enemy security and military forces. That was fine. Even laying low between the final "Go" and the actual zero-hour start of the operation was easy; you found a willing local female, or an unwilling one, and you laid her low until it began.

It was the time between the actual start of the operation and the launch of his role in it that had always eaten at him.

Full alert and on hold sucked. It sucked when he was still in Recon and it sucked now.

Rimaldi was wavering, but fighting it well through the first three plates of her meal. Her body was shutting down on her and she'd have no idea why. Her brain was going with it so she was probably past caring.

C'mon bitch. Just hold it together long enough to deliver the dessert clean.

She almost dumped the final dessert plates to the studio's cement floor, earning gasps of surprise from the judges and cameramen.

But she recovered and made it to the table.

Franco held his breath as she stumbled through her presentation. The drug was allowing so little oxygen to her brain that it was amazing she was still standing.