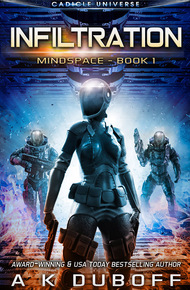 Amy Kay (A.K.) DuBoff has always loved science fiction in all its forms, including books, movies, shows, and games. If it involves outer space, even better! She is an award-winning and USA Today bestselling indie author and screenwriter specializing in space-based science fiction and fantasy. Dubbed the modern "Queen of Space Opera" by her readers, she is most known for her acclaimed Cadicle Universe. Amy's short fiction has been published by NewCon Press, Seventh Seal Press, and in numerous indie publications. When she's not writing, she enjoys travel, wine tasting, binge-watching TV series, and playing epic strategy board games.

One mission can change everything.

When Captain Kira Elsar comes face-to-face with a military assault mech inside a civilian research lab, it's abundantly clear that MTech is up to no good.

As the Tararian Guard's sole telepath, Kira goes undercover to get to the bottom of the mystery. Hints point to a brewing stellar civil war, but she needs to gather proof. Except, the mysterious forces behind the conflict already have their own plans for Kira that will change her life forever.

•When a writer as great as A.K. DuBoff gets her groove on, all you can do is come along for the thrill ride that is racing your way. Known as the modern "Queen of Space Opera," DuBoff eats, breathes, and lives the genre, sparking best-selling books like this one, set in her popular Cadicle Universe. Once you lose yourself in this novel, you'll see she is a master of weaving irresistible tales with incredible core ideas and fast-paced action that will leave your heart racing and a smile on your face. Infiltration features telepathic Captain Kira Elsar, who goes undercover to try to head off an interstellar civil war. The high-stakes drama never lets up, and the characters driving the action will pull you through from start to finish. DuBoff has created an unforgettable space opera adventure that will make you fall in love with the genre all over again. – Robert Jeschonek

Under normal circumstances, Kira would have cursed the stars for needing to endure an audience with one of the most notoriously rigid, domineering officers in the Guard. This time, though, she wanted answers. If getting that information meant turning the charm up to eleven with the hardass officer, she'd do it.

The administrative section of the Guard base was situated at the center of the star-shaped space station, where it would be the most protected in the unlikely event of an enemy assault. Each arm of the star configuration contained a central concourse leading to starship berths and bays for the significant complement of fighter craft.

To expedite her trip to the center of the facility, Kira hopped in a car along the maglev track running the length of the concourse. At the central hub, she exited the car and jogged the rest of the way.

After pausing to make sure her shipsuit was in regulation compliance, she knocked on Kaen's office door.

"Enter," a baritone voice called from within.

Kira plastered on her most professional smile and entered. "Hello, sir. You wanted to see me?"

"Have a seat, Captain." Kaen gestured toward a metal chair across from his desk.

"Thank you, sir." She sat down but didn't bother to get comfortable. Prior experience with that particular seat had revealed it was impossible.

"I understand that you ran into some trouble at the MTech lab."

He has such a way with understatement. Kira nodded. "Yes, sir. Our intel said the facility was abandoned, but we encountered armed guards and a military assault mech."

"Barely fit in the hallway, sir."

Kaen frowned. "I'm glad your team was able to fulfill the mission objective despite those setbacks."

'Setbacks'? That's how he's going to play it? Kira leaned forward in her chair. "Sir, may I speak freely?"

He gave the hint of an exasperated sigh but quickly composed himself. "Permission granted."

"Someone doctored the mission brief."

Kaen studied her. "What makes you say that?"

"The resistance we encountered wasn't some new arrival that walked in moments before us. They had been there, and there wasn't any shielding around the facility to have hidden the thermal outputs. Someone knew that facility was occupied, but the Guard wouldn't have received data retrieval authorization for an active private lab. They wanted us to think it was abandoned so we'd go in." Kira crossed her arms.

"I can't deny the possibility," Kaen said after a ten-second pause.

The colonel's eyes widened. "Why would I put one of my best teams at risk like that?"

"Because you knew we could handle it, like we did."

"Your team is quite skilled." Kaen folded his hands on the desktop. "Few others would have been able to access those files."

That was a roundabout admission of guilt, if ever there was one. But why? "Before we left, the man I… 'interrogated'… indicated that there's something going on with the Mysarans, and potentially beyond that."

The colonel gave a slow nod. "The Guard's responsibility is to assess threats and carry out orders in the best interest of the Taran Empire. You have performed admirably in retrieving information to support those goals."

If a career in the Guard hadn't worked out, Kaen would have made a bomaxed good politician. Kira flashed a prim smile. "Happy to do my part, sir."

Kaen steepled his fingers. "It's been, what, nine years since you joined the Guard?"

He nodded. "I can tell you've been around long enough to know when a superior officer is dodging your questions."

No shite. Kira decided a shrug was the best response.

"Well, your observations at the MTech lab support a larger pool of evidence we've gathered over the past eight months. We're at the leading edge of a crisis."

That was surprisingly candid. Kira came to attention. "Sir…?"

"We've been tracking a group of researchers in MTech performing illegal genetic experimentation," Kaen explained. "The lab you infiltrated was one of those facilities, and the data you retrieved is documentation of the experiments."

"What kind of experiments?"

"We believe they are trying to make a hybrid—bringing together the traits of those with telekinetic abilities and some sort of unknown alien physiology."

Kira's mouth involuntarily dropped open. "An… alien hybrid? I didn't know there were—"

"There hasn't been an official first contact with this race, but the information we've received points to an influence outside of known Taran biology. MTech's reports refer to this new group as the 'Robus'."

Alien hybrids with telekinetic abilities? What the fok would a person like that be able to do?! Kira shifted in her chair. "Sir, why are you telling me this?"

"Because we fear that the Mysaran Coalition intends to use these alien-hybrid Robus to attack Elusia, which we anticipate will soon rejoin the Taran Empire. We want to stop that conflict before it starts."

Kaen fixed her in a level gaze. "The Guard needs you to go back to Valta, Kira. MTech has established a new lab. We need you to find out why."

Kira worked her mouth, unsure what to say. She hadn't been back to her homeworld since she left as a teenager. Her stomach clenched, thinking about what it would be like to return after so long.

While the Guard's promises of using her abilities to help others had resonated with Kira, not everyone in her community had seen it that way. Some considered it a waste of her gift, others an adulteration. Her family had begged her not to leave, but the opportunity to travel the stars was too much for her to pass up. She'd left them all behind—suddenly and without ceremony. She was certain there were lingering hard feelings, even after a decade, and she didn't need that kind of emotional baggage to distract her from a mission. The Guard was her life now.

"Sir, why would MTech set up a lab on Valta?" Even as Kira voiced the question, she already knew the answer. Whatever gives the planet its special telepathic connections, they want it.

Mysar and Elusia had argued over claim to Valta since the system was colonized. MTech, though, was a private company and could tread where government could not. However, what Kira had witnessed on MTech's remote moon lab had made it clear that something else was going on besides sanctioned research.

"We trust you'll get to the bottom of it," Kaen responded after giving her a moment to reflect. "You have authorization to use any means necessary."

"No restrictions, sir?" That was a first. Even in the most critical missions, Kira had always been held to strict rules of engagement about which forms of telepathic influence were allowed—a code she followed even in her personal life. If they were granting access to the dark side, the situation was very dire indeed.

Kaen inclined his head. "We need this handled quickly and quietly."

"Your team won't be going with you on this one—at least not for the initial recon work."

"We feel that a more… local contact would be beneficial for the mission." His tone was final.

Kira sighed inwardly. "Of course, sir. I'm happy to work with anyone." She hoped the statement came out with a straight face. In truth, she'd joined the Guard so she'd be among the esteemed elite rather than being partnered with whatever poor sap happened to be assigned to a random project. Her patience for idiots lasted about as long as her tolerance for poor musical accompaniment to viral videos.

"When your name came up for the assignment, our local government contacts remembered you. They located someone with the appropriate qualifications who already appears to be an acquaintance of yours. He'll serve as your liaison."

Just my fantastic luck… Kira braced herself. "Oh, and who's that, sir?"

Leon Foking Calleti. That figures. It had been more like 'foking Leon Calleti' a decade prior, before Kira dumped him with no notice to join the Guard. Of anyone, he made her the most nervous to see again.

"Excellent. You'll depart on a transport to Valta this afternoon," Kaen stated. "We'll assess the right time to bring in your team once you have the lay of the land."

"Yes, sir." She stood, her head swimming with the possible scenarios for how her reunion with Leon might go.