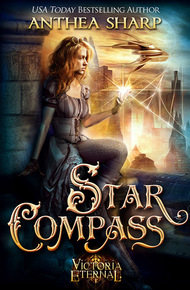 Firefly meets Charles Dickens in this tale of an orphan destined for the stars.

Space Opera with a Steampunk twist! Enter a fantastical world filled with alien spacecraft and Victorian sensibilities, ball gowns and travel to the stars - where a plucky pickpocket with a particular gift makes the journey from the gutter to the stars…

•Anthea plays the heartstrings as well as the violin. This amazing author-musician knows just how to carry a reader through a book, hitting all the right notes to create an unforgettable and stirring experience. Star Compass is no exception, telling a space opera tale with steampunk flair that brings to life the adventures of a pickpocket who longs to visit the stars. The science fiction elements never overpower the starry-eyed central character as she makes her way from the gutters to the spaceways, learning important lessons along the way and becoming the daring heroine she was always meant to be. Rest assured, you're in the best of hands when you leap into this incredible book, or anything written in any genre by Anthea.

Overhead, the roar of a ship taking off distracted Diana Smythe from the grimy reality of Southampton Spaceport's alleyways. The outbound ship was a hauler from the sound of the engines, loaded with cargo and headed beyond the solar system.

Diana tilted her head. The ship should be visible between the buildings in just a moment… there. Heavy-bodied and powerful, a mid-century Frauke, probably bound for one of the colonies out along the spiral arm.

She watched until it was just a speck in the sky, trying not to think of the stars shining behind the blue. Trying not to think of what it would mean to save enough to book passage out to a new planet, where she could start over. Where her life wouldn't be a constant scrabble, always looking over her shoulder for trouble.

Every streetrat had that dream, to board a ship headed to the stars. It was as impossible as the storyvid tales of fortunes suddenly regained, of lost families reappearing to fold missing orphans back into their arms. But her life was not a storyvid. She knew well enough that families didn't miraculously come back to life after a flaming carriage crash, and lost riches never magically reappeared.

Even though she knew it was an impossible dream, yearning stung the back of her throat. She felt for the shiny crystal button she wore on a string about her neck—the one remnant of her former life. It wasn't valuable, else she'd have bartered it away long ago. No, the button was simply a useless little trinket that she couldn't bring herself to part with.

Someday, I'll find a place to belong again. The old longing rose in her, and she savagely thrust it back down, then spat the taste of misery out of her mouth. Her home was gone forever, and that was the hard truth.

The hope of escaping Earth was harder to abandon, though, living as she did beneath the stitched shadows of takeoffs and landings from the largest spaceport in the galaxy. Every night she counted her small store of coins, but it was not enough. Never enough, not even for a berth to the moon.

"The moon," her young acquaintance Tipper had said, rolling his eyes. "There's nothing up there but dust and the nob's castoffs. I want to go someplace real, like Patcheny or Blue Crumpet."

"Blue Crumpet's already full up," Diana had said. "I think Dahlia 7 is the planet for me."

They'd had the conversation at least a dozen times. Tipper's voice always held a longing that Diana had learned to hide—but then, for all his cockiness, he was still a child. Still dreaming the child's dream of space, the blackness full of stars and possibility. A million futures to choose from.