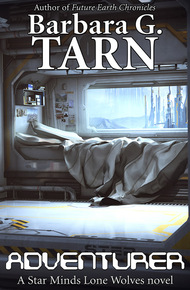 Barbara G.Tarn writes mostly fantasy, a professional writer and hobbyist artist, a world-creator and storyteller. She has a few series: her fantasy world of Silvery Earth (high fantasy) and the Star Minds Universe (space opera) are mostly standalone. She dabbles into historical fantasy with her Vampires Through the Centuries series and plays with post-apocalyptic/steampunk in Future Earth Chronicles. Ghost Bus Riders is elemental magic in a contemporary setting and Otherside a steampunk world beyond portals accessed from Earth and controlled by cats. Find her books at www.unicornproductionsbook.com.

She has stories published in Pulphouse Magazine, The Phantom Games, Halloween Harvest and Crunchy With Chocolate. She writes, draws, ignores her day job and blogs at: http://creativebarbwire.wordpress.com.

Hard to kill when you're a telepath. Unless your feelings and empathy are frozen by grief.

Iso-bel "Icy" Aya Shermac lost her home planet at twenty to a cosmic catastrophe. Five years later she joins the adventurers and rogues to start earning a living.

•With a heroine like Icy Aya at the wheel, you just know you're in for a heck of a ride. This book in the Star Minds series by Barbara G. Tarn will send you soaring through the cosmos on a nonstop thrill ride, experiencing one high-stakes adventure after another in a universe alive with wonder and danger. The author doesn't let up from start to finish, and the great writing will leave you starving for more of her work…and more of the wild future of Icy Aya and company. – Robert Jeschonek

The Galactic Showboat didn't land on Earth, much like the Galaxy Express. Both were too big to land on planets and passengers got onboard via orbital stations.

Icy Aya took a shuttle to the main Gaian Orbital Immigration Station and went to wait in the VIP lounge with her brand new attire – a mix of a wedding gown and other traditional clothes – ready to impersonate the suave princess Iso-bel Shermac.

Watching the blue sphere of the planet outside of the window, she briefly remembered her summer trip with Jes-syd, Emma-lin and Ran-ald, when she was rainbow-haired and hoping to come back to Earth on honeymoon.

Jes-syd had been so good at organizing their trip to Earth! She had managed to see all the things she wanted to see – well, except Paris and the Eiffel Tower, she'd have loved to see it again with grownup eyes – and then they had gone to Mirabilis with their friends and it had been the best summer of her life.

Well, she was back on Earth, almost dressed like a bride, but she wasn't married and didn't intend to. She wasn't going to channel her grandmother to the point of choosing a suitable husband with her mind to breed for the glory of the family. She had no family left to speak of anyway.

She caressed her wide, embroidered gown that made her look like a colorful flower seated on the white couch of the VIP lounge. A hairdresser had pulled up her hair, attaching the veil to her bun, making her look even more regal. She didn't have much jewelry on display – not as much as the models in the ads for the local fashion – but she had enough to play the part.

She closed her eyes and called to mind all the videos of her grandmother she had watched in the last hours, trying to memorize how Lin-sun Vaurabi moved and smiled and pretended to be what she wasn't.

Suryaveer arrived at the last minute with his entourage. Icy Aya caught a glimpse of his young wife and met the threatening stare of Syriss. He wasn't the first Reptoid she'd seen, but she briefly compared him to the young Draconian she had met seven years earlier during her summer trip.

Syriss seemed to be of Saurian descent, since he had a lizard-like muzzle and no horns or wings like the Draconians. He had a shorter muzzle than the pure-blooded and brown scales with green nacreous reflections. He was shorter and sturdier than most Reptilians – both Saurians and Draconians – and wore a cloth over his groin. The tongue that flickered out when he spoke was as round as a human's and he had five fingers with scales only on the upper side of the hand, like hair on some human males' hands.

She looked away with the most bored expression she could muster. The Reptoid and his men made a wall around their boss, so she ignored them and kept looking outside of the window to the planet below until they were allowed onboard the Galactic Showboat.

She was surprised to be welcomed by a Roshan, a second generation battery-operated boyfriend, who took her luggage and accompanied her to her cabin and asked her if she wished for company. Being on the asexual and aromantic side of the spectrum in her current state of mind, she told him she didn't need company and released him from service.

He looked disappointed like a human being. The Serenaide Labs were issuing more and more realistic androids. For a moment she wondered if Jes-syd was working on artificial intelligence or still preferred the meganet and mind uploads.

Her cabin was quite luxurious, a stateroom with an antechamber and then the bedroom with a big canopied bed, a vanity, a comfy armchair. The antechamber had a desk with a laptop where one could consult the map of the starship, and a corner with plush couches around a low table. She even had a private veranda opening on to the entertainment level.

Icy Aya loved her new gown, but it was uncomfortable. She preferred wearing pants and shirts, so she changed before sitting at the desk and studying the ship map.

From the outside, the Galactic Showboat was a half disk in the front part, broken by a cannon to protect the ship from pirate attacks. The back half of the ship was the engines that formed a sort of triple tail.

The half disk had three levels for Humanoids in a pyramidal structure. Guests had their cabins at the highest and smaller level, the entertainment deck was the middle one and was made of two levels to be able to fit a full-fledged arena and a stadium, plus shops and restaurants and shows for all tastes. The crew deck was closed to guests, wider but with lower ceilings, and it was below the entertainment deck.

The flight deck – closed to guests unless invited by the captain or the owner of the starship – was on top between the two halves of the starship that was painted half red and half silver. It was a megaship, bigger than the Imperial Disks she had seen so far, bigger than any of the ships of the former Shermac Fleet.

The passengers levels were enclosed in a circle that had a central open atrium with a domed glass roof and during night cycles one could see the stars outside. If one stood at the center of the circle, one was surrounded by balcony-laden condominiums – the cabins and suites on the upper level, each with their private verandas.

The Galactic Showboat was like a moving luxury hotel with a formal dining room and more casual buffet-style eateries open 24/7. There was a casino and shops that opened only when the starship was in outer space, a spa and a fitness center, a library, three movie-theaters, lounges, gyms, pool tables, bowling alleys and, of course, theaters with live performances of every kind – musicals, plays, circus acts, concerts, dance performances and even live broadcasts to the rest of the galaxy for some shows – and a couple of low-gravity stages.

There was so much choice that Icy Aya wondered if she'd manage to get any closer to the ambassador during the cruise that would take them across the Milky Way. Since it was a leisure ship, the Galactic Showboat maintained a very normal cruising speed that made any trip last longer than the Galaxy Express.

Their current cruise course would touch a few planets, but Icy Aya had no idea if the ambassador would get off and visit any or if he would just stay onboard and wait until they reached the pleasure planet, Vilas Lok. He'd probably get off at some point and have his private starship take him back to Gaia, but there was no telling when he would get bored with the Showboat entertainment system.

And then she received an invitation for a welcome dinner – a formal reception in the main dining room. With a sigh, she prepared herself to become a princess again.