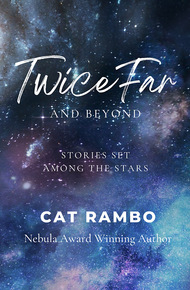 Cat Rambo's 250+ fiction publications include stories in Asimov's, Clarkesworld Magazine, and The Magazine of Fantasy and Science Fiction. In 2020 they won the Nebula Award for fantasy novelette Carpe Glitter. They are a former two-term President of the Science Fiction and Fantasy Writers of America (SFWA). Their most recent works are space opera You Sexy Thing (Tor Macmillan) and anthology, The Reinvented Heart (Arc Manor, March, 2022), co-edited with Jennifer Brozek.

For more about Cat, as well as links to fiction and popular online school, The Rambo Academy for Wayward Writers, see their website. They are represented by Seth Fishman of the Gernert Agency.

Cat's recent space opera, You Sexy Thing, was nominated for Dragon and Locus Awards, as well as an Amazon Editor's Pick for Best SF of 2022.

TwiceFar and Beyond by Cat Rambo

TwiceFar and Beyond consolidates for the first time all of Rambo's works within the TwiceFar universe, where a spacestation in a constant state of flux houses lives from across the Known Universe.

•What happens when you collect some of the best space opera stories by an author who continues to make great strides in the genre? You get TwiceFar and Beyond, a set of outstanding stories that will dazzle you with their excitement and ambition. Cat, a Nebula Award winner and former President of the Science Fiction and Fantasy Writers Association, hits one home run after another, each tale written with extraordinary grace and power. It's the kind of book that will make you want to read further in the genre and seek out every last piece of fiction ever written by this prolific and inspired author. – Robert Jeschonek

Most people called her Phoenix. Her former crew used "Captain" before that and "Sir" afterward. Ruby and Ada respectively called her "mother" and "g'ma." Her hair was silver - not white, but genuine, metallic silver, a long fall against her pale blue skin, the color of a shadow on a piece of willow ware, that made her seems ageless despite the century and more that lay upon her, not to mention all those decades of pirating.

They said she'd been the best slideboard rider of her time, and perhaps the best battleship pilot of all time, back before her parents and sister were killed and she turned rogue.

They said she had done terrible things in her pirate days.

They said she'd been ruthless in her rise to power, moving up the chain from god knows where, an origin she'd never, ever spoken of to anyone, not even her own daughter. She'd killed some captains, slept with others, called in favors and maneuvered and betrayed and seized power with a brutal efficiency that still underlay what now seemed a calm and orderly, rules-bound government that she and Mukopadhyay had created.

They said she had killed hundreds, perhaps thousands, of people — sometimes at a distance, sometimes up close, with knife or fist. They said she'd killed a crew member when the shuttle she was in needed its mass reduced and the man hadn't even argued, just nodded and stepped into the airlock, never said a word as the door closed and the lock cycled, staring in at his captain as she stared back.

They said time had mellowed her.

They said working with Mukopadhyay, even though he was crazy as a spiral comet, had mellowed her.

They said helping colonize a whole planet, setting up its government, the rich and intricate power structure that now encompassed the whole solar system called Shiva, had mellowed her.

Not to mention motherhood, they said, a change which no pregnant woman escapes. It alters the hormones in your body. Softens you. Makes you less rash, less harsh. Takes away even the sharpest edge, not to mention the hormonal craziness, which some women never recover from, after all.

Sure, changes you in a good way, they were quick to say.

They said she'd never do those sorts of things now.