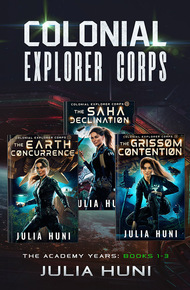 Julia Huni writes hopeful science fiction full of heart and humor. In college, she studied Computer Science and National Security, both of which she ignores completely when making up stories involving computers and politics. While serving in the US Air Force, she worked on a NASA program, and thus considers herself a rocket scientist.

Julia has a spouse, three children who appear and disappear depending on the date, the weather, and their bank account balances, and a house that just acquired its first cleaning robot, the Vacu-bot 2000. The future is glorious!

A hero with big expectations. A daughter who doesn't want to live in his shadow.

Siti Kassis joins her father, the "Hero of Darenti Four," on his last assignment: to find and explore the deserted homeworld of mankind. It's a twenty-year mission, and a chance to make history—even if twenty years in deep sleep is a bummer of a way to start her "gap year." But what awaits them is beyond everyone's expectations.

•The only thing better than reading one book by a terrific writer is reading three. Thanks to this great box set, you can do a deep dive into Julia's action-packed space opera series that will leave you craving everything she has ever written. These books have it all, featuring a brave and complex heroine facing seemingly insurmountable odds, perplexing mysteries, and startling revelations among the stars. High-powered scifi with high stakes, great characters, and tons of surprises; that's what you can expect from the books in this set, and anything written by this author. – Robert Jeschonek

"Make a hole!" a voice called over the rumble of conversation. I stepped to the side of the corridor, glancing over my shoulder as I moved. A squad of men and women jogged in formation, their faces focused. As soon as the group passed, those of us pressed against the bulkheads relaxed and returned to our business.

"I wish they'd stay in the gym," a man in front of me muttered. His coverall identified him as a ship's engineer.

"They say it's too crowded now," a woman wearing lieutenant's bars replied with a hint of disbelief. "I think they just like to make the rest of us feel inferior. We haven't woken that many of them, yet."

"How many we got this turn?" the engineer asked.

"Fifty," the woman said. "Plus his excellency and the princess. We'll wake the other fifty when we park."

Anger kindled in the pit of my stomach. His excellency and the princess?

"His excellency?" the man asked. "You mean Kassis? Who calls him that?"

The woman glared at her companion.

The woman's glare faded. "Just something I heard at the club. Don't spread it around. I'll deny saying it."

"He seems okay to me," the man said. "And that nickname sounds kind of derisive. Sir."

"There are a few people who don't love Kassis," the lieutenant said. "And don't forget it." She gave the man a hard look, then caught me glaring from behind him. Her eyes widened a little. "Good morning, Ms. Kassis."

"Good morning, Lieutenant," I replied as I pushed past them. "Sergeant."

"Did she hear us?" the sergeant muttered as I sped away. "Sir?"

I stepped out on the recreation deck and headed for the gym. The passageway rumbled with a dozen different conversations. The ship's crew bustled around me, everyone moving with purpose. They hurried past, discussing scrubber status and drive vibrations and dilithium crystals.

Not really. Dilithium crystals aren't real. They're from an old vid series my dad liked to watch on Ancient TēVē. I thought it was pretty hokey—transporter rays, phasers, and warp drives. And the effects were terrible. But he liked the characters. He said it was a remake of an even older series that originated on ancient Earth. That's why he studied it, I guess.

My name is Serenity Kassis, and my father is Nathanier. Yes, that Nathanier Kassis. The guy who discovered the first sentient non-humans in the system. He liked to tell people it was a team effort, but he was the commander on that expedition, so he gets the credit. And, to be honest, he really was the one who spotted them first.

Exploring new worlds takes a toll, so Dad decided to retire on a high note. But when they offered him one more mission—this mission—he couldn't say no.