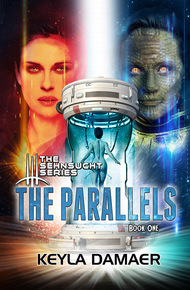 Keyla Damaer is an Italian author who has enjoyed writing since she was a child. She travelled a lot, especially throughout the United States, where part of her family lives, and that gave her the opportunity to deepen her knowledge of the English language, which she had cherished since she was a child.

She was born and raised in Rome, where she still lives with her husband and her turtle. By day she's a part-time accountant, but by night she's an imagination engineer with a way with words. The Parallels is the first book of The Sehnsucht Series and her first novel published as an independent author.

The Parallels by Keyla Damaer

A militia officer on the hunt for a murderer. A scientist with the key to humanity's future. A girl in a glass tank with no memory.

•This first novel from Keyla Damaer will have you hooked from the beginning, working along with the heroine to solve the mystery at its core. When a woman awakens with no memory in a glass tank, how can she solve the puzzle of her life? The answers she seeks will change her destiny…if only she can survive long enough to find them in a galaxy on the verge of all-out war. Keyla knows just how to keep you interested, and The Parallels will have you glued to the text, flipping from one page to the next at a rapid pace. – Robert Jeschonek

Air. It saturated her lungs, choking her.

It hurt at first, but the longer she tried, the better she could inhale and exhale.

Her slow awakening made it hard to focus on her blurry surroundings: a curved glass-wall confined her, and something kept her suspended in mid-air inside a massive, cylindrical jar. She tried to move her arms, but a wave of horror overcame her when she found electrodes attached to her naked body. They pierced her skin. How deep did they go and what was their purpose?

At least breathing caused no additional pain after a while.

And then another one.

The electrodes limited the movements of her head while shadows kept moving within her peripheral view. One of them fell on her. It belonged to a woman in a white coat wearing round spectacles, her soft blonde curls framing her face. The woman examined something to the left of the tank, took notes on a tablet, and left, never resting her eyes on her, as if she weren't even there. Perhaps, she was a doctor. She did behave like one.

Only when she tried to speak did she pay attention to the oxygen mask over her mouth.

Of course, that's how they're supplying oxygen to me. But I have no memory of breathing before.

If she had to be honest to herself, she had no memories at all before now. She was conscious of being a female and could name everything she had experienced: she could feel, see, and hear. But that was it; she didn't even remember her name.

More confusion hit her when she gazed down at her naked body. Her breasts were those of a teenager; two peaches ready to drag attention to them.

How can I remember all this but not my own name?

She placed her palms on the glass of the tank. The surface felt smooth and cold to the touch, as expected. She knocked, hoping to get the doctor's attention. Or someone else's. No one showed up, though. She tried over and over again, but nothing happened. No one came to check on her.

Maybe they're in another room. She would wait. Sooner or later, someone would tell her something.

Somehow, she knew she had time. She could wait.

And so she did.

Time went by. She fell asleep and woke up again, but no one wandered about anymore. No more shadows moved around, no white coats, no blonde scientist.

Where's everyone gone? Have they abandoned me here?

What if they're all dead and I'm alone? What if someone attacked me and I'm surrounded by enemies?

She screamed inside the mask. Her fists pummelled the glass cage. Her heartbeat accelerated; it looked like her organ would explode inside her chest at any moment.

A weird taste assaulted her mouth. When she tried to spit it out, she couldn't. Fear rose as a wave of dizziness overcame her. Her struggle increased until her muscles refused to work and the need for sleep intensified.

She flinched when she came around. The bulbs—the only source of illumination inside her tube—disturbed her vision, causing great discomfort to her eyes.

Oh yes. She remembered now. She panicked when the thought of being left alone—or worse, imprisoned by enemies—occurred to her. And the machine responsible for the oxygen inside the tube had reacted to her erratic heart-rate with an automated safety procedure, sedating her. This was a self-sustaining lab.

But how do I know all these things? Am I alone? She had so many questions, but no one there to answer them.

Her heart missed a beat.

A woman's voice. Where is it coming from?

Someone spoke to her. Maybe the blonde doctor she saw before? There could be a hidden communication device inside the tank. She wanted to talk back, but she couldn't speak with the respirator over her mouth.

'Don't be stupid, Eleanor! You remember how to talk to me,' the voice said.

No, I don't. She couldn't talk. How could she with a mask over her mouth?

Whose voice was that? And how could she hear it in the first place?

'Yes, you do. You're talking to me right now. I can hear you the same way you do with me,' the woman's voice said. 'You don't remember my name … or yours. You are such a disappointment, Eleanor! TALK TO ME!'

The pain inside her head became excruciating. Soon, darkness and silence engulfed her once more.

When she woke up again, nothing had changed inside the room. With all the lights out but for the ones inside her tube, she couldn't see anything but herself, the electrodes, the bulbs, and the tank. Without the pain inside her head, she rejoiced at being alone.

The voice has gone. Did I imagine it?

She must have because the doctor never spoke out loud. Despite her conclusion, her mind kept wondering and wondering.

Who's Eleanor? Where's everyone? Am I crazy?

She concluded that she must leave the tank and find out who she was and what was going on before going bonkers, especially if enemies surrounded her. When she moved her hands to remove the electrodes hindering her head's movements, however, more doubts beset her.

Where does the feeling of being surrounded by enemies come from?

'A good question, Eleanor. Why do you think you are surrounded by enemies?'

All this time, she had been thinking. How could the voice know what she was thinking?

'Are you reading my mind?' That truth struck her as something familiar. Were they telepaths?

'No, I am sending smoke signals,' the woman replied with sarcasm. 'I refuse to work with you. You're not worth my time,' the voice concluded.

'Who are you? Who am I? I have so many questions. I thought I was alone. Where are you? I want to—'

'Will you stop it? This is not an interrogation. I have been trying to talk to you for hours. Your mind is useless!' Eleanor could see the woman's face inside her own head now as a projection from her own mind.

And they were telepaths.

Eleanor's lips curved up. She remembered something.

'Yes, I'm Jorelle and you're Eleanor. Now, stop prying inside my head or I'll hurt you,' she spat. 'A little bit of pain can't be too bad for you, can it?'

The discomfort at the back of Eleanor's head exploded once again. Her smile died on her lips, turning into a grimace.

The pain increased, and visions of a burning city flashed into her mind, then faded into blackness. Darkness moulded into shapes. A face looking like Jorelle, but somehow different—perhaps a sibling—familiar visages, places, and unknown faces appeared and disappeared in her dreamlike visions. Then nothing.