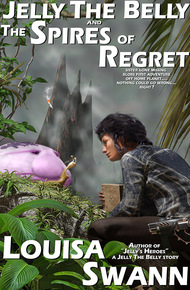 A lover of local history and fantastical possibilities, Louisa Swann spins tales that span multiple genres, including fantasy, science fiction, mystery, and steampunk. Jelly the Belly and her blob squad have appeared in Valor and Reader's Choice (Fiction River anthologies) as well as Esther Friesner's Chicks and Balances. Louisa's other short stories have appeared in Mercedes Lackey's Elementary Magic and Valdemar anthologies; and numerous other Fiction River anthologies. Her steampunk/weird west series, The Peculiar Adventures of Miss Abigail Crumb, is available at your favorite etailer.

Jelly the Belly and the Spires of Regret by Louisa Swann

When Staff Sergeant Jillian K. Wilson, aka Jelly the Belly, finds out her sister's gone missing, there's nothing to do but find her.

Which was how Jelly found herself on some podunk planet clear across the galaxy. She expected to find her sister on this planet. She did not expect to find blobs in her bunkroom, slime in her duffle, and goblin-like creatures with very sharp teeth.

Of course, her transport ship is attacked and forced to land on said podunk planet, rather coincidental in Jelly's mind. But Jelly the Belly doesn't believe in coincidences. Turns out there's a method to whatever madness is going on in the dense jungle wrapping the planet in mystery.

And Jelly's going to find out what it is.

After she finds her sister.

•For someone so down-to-earth, Louisa Swann sure writes some crazy books and stories. Case in point, this bizarre space opera adventure featuring the "Blob Squad," a team of gelatinous alien warriors. Did I mention they communicate through belches, hiccups, farts, and other bodily noises? Talk about a weird bunch of characters…but Louisa makes them shine. I love that she has given us a group of truly unique alien protagonists instead of just another variation on humanity. Her twin flairs for writing comedy and scifi action enable her to give this book the incredible spark that will make you beg for more titles in this series. – Robert Jeschonek

The last thing a traveler—terrestrial or spacefarer—wants to find in their duffle bag is slime. Particularly the ooey-gooey slime that saturates everything it touches and soaks through to things it doesn't physically come in contact with.

"Good thing your goo-gun is off," Jelly said, glaring at the rat terror-size slug quivering on the bunk in front of her. "Else you'd be fodder for the feeder tonight."

Staff Sergeant Jillian K. Wilson, aka Jelly the Belly, had never seen a 'feeder' in her life. She'd heard the term somewhere—likely from her Gram or Gramps—and liked the sound of it. Made an appropriate threat for a slug who didn't know how to stay planetside where it belonged.

She ran a hand over the interior of the duffle bag one last time, searching for any trace of gooey slime. Looked like Slime had indeed been minding his manners.

The little slug wiggled and waggled his eyes stalks, pointing at the chest-size containers stacked along the wall behind her bunk. She'd assumed those containers were part of the ship's cargo…

"You didn't." She dragged one of the containers onto her bunk, snapped the clasp open, and groaned. "You did."

The container held one object—round, pink, and shiny. An object that did not belong on the cargo ship. Quickly, she dragged the other containers out and popped them open.

When she was done, eight of the roughest, toughest, baddest blobs humanity had ever known sat in front of her.

All eight members of her Blob Squad.

Someone who'd never seen her squad would see oversized mounds of pink pudding (or discarded chewing gum, depending on their preference) with drooling lips, bulbous noses, and beady eyes staring back at her.

But her blobs were much, much more.

Who were supposed to be back on Centauri IV, taking orders from her replacement.

The blobs didn't burp, hiccup, or jiggle. They just stared at her, eight sets of beady black eyes peering over the edges of their individual containers. The room felt eerily quiet without any of the disgusting sounds that provided a means of communication for the blobs, but always left the air perfumed with a variety of stenches that used to turn her stomach, rotting bananas being among the best of them.

"Fall in!" Jelly stood at attention, waiting for her squad to plop into line in front of her.

The blobs stayed in their containers.

She would've reamed her human soldiers up one side and down the other for not instantly obeying her command, but she'd discovered on the first day of blob training, her new recruits turned into quivering mounds of goo if they got confused, even worse if they were terrified. No sense yelling at them until she had an idea just what she was up against.

She glanced down at the rat terrier-sized slug by her feet. Jelly could understand a bit of blobese, but this situation looked to be a bit more complicated than a "bit" would handle. Private Slime was the closest thing she had to a blobologist. Not only did he understand the blob language, Sergeant James Mallory, her second-in-command, had taught the slug how to communicate via semaphore, the "language" ships used to use to communicate when radios were down, so Slime could serve as her translator.

Rather unconventional, but hey, in a world where giant mounds of what looked like sentient pink pudding lived in underground cities, unconventional was the new norm.

"Can you tell me what the hell is going on?" She waved a hand at the blobs peeking out of their containers. Slime twisted what Jelly had always considered to be his head (though she wasn't much of an expert on slug anatomy) and seemed to consider the blobs before looking up at her with eyes that suddenly reminded her of a hopeful puppy.

She wasn't the gooey marshmallow type. In fact, she'd beaten up half the kids in her school before she was four—if her dad could be believed. Fighting was in her blood. Nurturing was not.

Until Slime had shown up.

Not only was the little guy larger than any slug had a right to be, he was cute. Though she'd found it hard to believe at first, the little guy did his sluggy best to follow orders. He was also tougher and faster than the average slug. Earth slug, that is. (She'd never met any of Slime's Centauri slug mates, so she had nothing else to judge him by.)

And he threw himself in harm's way faster than anyone she'd ever known, slug, blob, or human.

"I've seen cats stowing away in luggage," said a deep voice behind her. "Dogs in crates. Even had a parrot stow away in the latrine. But 'slug in a duffle' is one for the records. And those other things…what the hell are they?"

Jelly turned her glare on the man standing in her doorway. "Ever hear the phrase 'Doors are for knocking'?"

Captain Garrick Sloan looked more like a model for a New Spacer vid than a cargo ship captain. He slouched in her hatch-shaped doorway, half in and half out of her room. His boots were as shiny as his bald head, his leather jacket stiff as a corpse, and he smelled like … cinnamon.

Too tall to simply stand in the corridor and peer in without bending his neck like a curious turtle, he made her tiny doorframe look even tinier. "An elephant in a shoebox," Grams would have said.

"Beg pardon, Sarge." The captain raised a perfectly arched eyebrow. "I didn't see the 'Do Not Disturb' sign. Besides, the door was already open."

Jelly scowled and let her gaze drift over the man's clothing. Her scowl twisted into a lopsided grin. "Good thing your scrubberbot is working again. Wouldn't want to get dust on that fancy new jacket."

He ignored her jibe. "Whatever those things are, stowaways gotta pay full fare."

"What? It's not like they're…people." Jelly waved at the containers. "Happy to pay the going cargo rate."

The blobs stayed quiet in their containers. The captain must have heard her talking to Slime. Otherwise, there'd be no reason to suspect the blobs were sentient beings. They could have been balloons for all he knew. Balloons with eyes, that is.

"We're almost to the planet, aren't we?"

The captain sucked air through his teeth and gave a sharp nod. "Came down here to let you know we're approaching your little planet. The 'Gazer's behind schedule, so I'm making this a drop and go. Get your stuff—and your…companions—down to the cargo bay—"

The alarm system chose that moment to shriek at the top of its non-existent lungs. The ear-piercing klaxon was accompanied by flashing red lights.

And just like that, Captain Garrick Sloan was gone.

"Duck and cover, Private," Jelly yelled to be heard over the alarm klaxons. She nodded at the slug as she ducked out the door. "Get our men under that bunk and glue everyone in place."