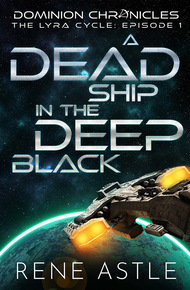 Rene Astle is an author of space adventure tales full of folks trying to get by while staying under the radar — and failing abysmally.

She gained a love of fiction and a voracious appetite for story literally at her mother's knee, who read her books like The Hobbit as bedtime stories. Her father sparked an enduring curiosity about the universe as they sat shivering in the dark beside a telescope on cold, Canadian winter nights.

Nowadays, when she's not writing or at her day job, you can find her in the garden talking to the bees and the worms … and the beans, most especially the beans.

A Dead Ship in the Deep Black by Rene Astle

Living on the edge, the crew of the cargo ship Lyra expects surprises. But they're not prepared for the one they find when the ship picks up two new members and a salvage job on a third-rate space station.

When they arrive at the coordinates for the salvage job, they're confronted by a dead ship in the deep black.

Seeking fame and fortune? Join the crew of the cargo ship Lyra — explore abandoned ships and get your picture taken by authorities.

Looking for adventure? Join the crew of the cargo ship Lyra — it doesn't pay much but we guarantee you'll be chased by patrol ships.

Rule number 1: Whatever you do, don't open the box…well, maybe that's rule number two. The first is don't take salvage jobs from people who tried to sell you to an Antillian bug salesman.

•If you have not yet ventured into the realms of Rene Astle, this is your chance. Rene has a great talent for writing exciting space opera novels filled with high-stakes drama, exotic settings, unforgettable twists, and heroic characters. I know this particular book will hook you with the story of the crew of the cargo ship Lyra and their fateful encounter with a mysterious starship that is much more than the target of a routine salvage job. Prepare for plenty of enthralling situations, entertaining characters, and shocking surprises in this extra-special space opera adventure from an author who really knows how to deliver the out-of-this-world goods. – Robert Jeschonek

"Ugh! What is this?" Rebeka said, peering into the mug Tink had brought her. "I said coffee."

Tink shrugged, one-shouldered since her other arm held the cat. "Maker's on the fritz, so you get cha." She slumped into the chair on the far side of the captain's desk.

Rebeka grimaced then took another sip as she scrolled through the feed on her tablet. It didn't taste so bad now that she knew what was in it.

Rebeka shook her head and slurped the cha as she continued to flip through the feeds. Her stomach burned. She blamed the acid in the drink and put it down.

"We are out in the Badlands," Tink said. "They're sparse and, more often than not, only barter."

"It'd be nice to have something that would at least pay wages. Fund some repairs when we get back to port. You can't do that with animal feed or arts and crafts." Rebeka glanced at Tink. "How is the ship, by the way?"

Tink shrugged, jostling Grim again. "Okay. It'll get us back to port. It might complain the whole way and hold a grudge, but it'll do it."

"So, Muscles was useful after all?"

Rebeka chuckled and picked up her mug again to hide her smile at the face Tink pulled.

Instead of answering, Tink went on about the ship. "It could use a bit more TLC when we're in dock, to make sure our patch jobs hold. Which leads us back to needing a contract. But contracts are thin. Unless you're in the Badlands, as we are, and then they're mythical or...."

"Slog work for criminals or bare rock homesteaders who pay in animal feed." Rebeka let her grumpiness out. "Or they don't pay at all."

"Not all of them are like that." Tink raised an eyebrow at her, and Rebeka tipped her head in acknowledgement. "What was it your predecessor used to say? Space takes all sorts, and there's a place for all of them."

Rebeka scoffed. "He also said space is a big place — easy to get lost in and never be found...."

"Especially in the Badlands," Tink said, joining in with a smile on her face. "It's why many folks come here...to not be found." Tink came to stand beside her, peering over her shoulder at the feed she flicked through. The listings convulsed; with only one ancient ansible feeding the entire area, the Connect was spotty. "Hmmm. You're right. Not much." She stepped back. "Here, you need this more than I do."

Before Rebeka knew it, a cat was dumped in her lap. "Huh?" she said, pulling back to look at the cat that stared at her with equal suspicion in his green eyes. She turned to Tink. "Really, the cat?"

"Trust me. There are studies."

"Cats bring contracts?" She arched an eyebrow at Grim. "Are you magical?" The cat merruped in response.

"No." Tink rolled her eyes. "Stroking them relieves stress."

Rebeka looked at the cat again. The cat peered at her. She was sure they both thought this was a bad idea. But she turned back to the screen, laying her hand on the cat's head. With her other hand, she flicked through the feed again. Looking for...that.

She paused. "What about this?"

Tink leaned over her shoulder again, biting her lip as she scanned the details. "Looks fine enough," she said, standing up. "Seems legit? Something the ship can manage, and it's not as dirty — or as dangerous — as the last job."

Rebeka tapped the ad to reply. Just as her finger hit the screen, a thump travelled from her feet through her thighs and into her chest. A split-second later, the sirens sounded, and twenty sharp points dug into her flesh as the cat launched himself into a skitter across the floor.

"What now?" Tink said, the words coming out in a groan. Without waiting for an answer, she took off sprinting. The thump had definitely come from below. The engine room, Tink's domain. Still, Rebeka downed the last of the cha and followed at a slower pace.