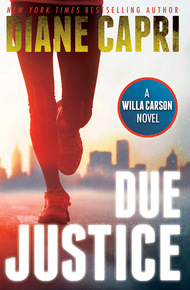 Diane Capri is Licensed to Thrill, and thrill she does. Diane's Hunt for Jack Reacher series began with Don't Know Jack and keep on thrilling readers around the world. All of Diane's books have thrilled readers and garnered #1Bestseller spots on Mystery, Hard-boiled Mystery, Police Procedural, Women Sleuths, and Legal Thriller lists. Diane's Bestselling Justice Series are world-wide reader favorites and garnered the coveted "Top Pick" from Romantic Times Magazine as well.

Diane is the past Executive Vice President of International Thriller Writers, past member of the Board of the Florida Chapter of Mystery Writers of America, and active in Sisters in Crime and other writing organizations. She comes to writing after a successful legal career and is married to her college sweetheart. She loves her snowbird existence preferring perpetual summer migrating from Florida to Michigan each year.

Diane says she writes mystery, thriller and suspense for the same reason she reads: for fun, excitement, to find out what happens, why people do what they do, and how to bring justice to an unjust world. Her books are translated in twenty territories. Diane loves to hear from readers. Contact her at dianecapri.com/contact/ to receive notice of new releases, subscribe to Diane's blog, or simply connect with her.

Due Justice by Diane Capri

When a famous plastic surgeon's decomposed body surfaces in Tampa Bay with a bullet in its head, Federal Judge Willa Carson's "little sister" is caught in a high-stakes game of greedy lawyers, blackmail and deceit. Carly Austin knew the victim too well. Does she know too much about the killer, too? Before Willa discovers the answer, Carly disappears. Can Willa save Carly from herself and the murderous conspiracy? Or have they killed Carly, too?

Free-sprited Judge Wilhelmina Carson is quick, witty and stubborn. She finds nothing is what it seems in a world where attractive women with enough money are made, not born, and beauty can cost your life.

I was unfamiliar with New York Times bestseller Diane Capri's work. When I asked Joshua Graham if he had someone to recommend that was a powerful thriller writer, his answer came back so fast it left me dazed. And now that I've read some of her work, I understand why (both the recommendation and the dazed part). I now must despise the both of them forever because Diane hasn't added just one book to my must-read-next pile, but well over a dozen. With Due Justice she brings us an unconventional legal thriller that will just kill you. – M.L. Buchman

I grew up outside Detroit, where the weak were killed and eaten. Still are.

Somehow it never occurred to me to change the station.

And no crime. Okay, less crime.

But lessons learned young stick with us. All those Detroit homicides proved one thing to me: You never see the bullet that gets you, even when it hits you right between the eyes.

Of course, I didn't think about any of this until long after the time to duck.

Carly Austin ambushed me at home. I'd dashed home from work later than I'd planned. Preoccupied. Distracted. Too much to do, too little time to do it. And there she was. Waiting for me.

Her mere presence was a shock; she'd been ignoring me for more than a year.

I'd covered well; offered smiles, hugs. Asked her to join me for drinks. She feigned reluctance, but allowed me to persuade.

Twenty minutes later we sat outdoors on the Sunset Bar patio. I played with the pink flamingo swizzle stick in my iced Bombay Sapphire and tonic, moving the lemon twist around the cubes, afraid to sip because the alcohol would do what alcohol does. The swirling gin, yellow lemon and white ice mesmerized, passed the time.

I knew it was the atmosphere that made me feel this way because I hadn't swallowed any gin. Yet.

Carly's visit was urgent in some way; she never came to me bearing good news or even minor trouble.

I felt my muscles tense with anticipation and anxiety.

Sought understanding. Gaze lifted. Watched my almost-sibling. What was the problem? Sure I could handle it, if only she'd tell me what it was. Too much drama. With Carly, always. If only she'd come tomorrow, when everything in my world was scheduled to be less tense. She had to know that today wasn't the best time to commandeer my attention.

Something was very wrong.

Again I noted the setting sun reflected glistening orange that flattered her copper coloring; but her clothes were wrinkled and dark circles under her eyes showed through her concealer. Lipstick smeared. Bright pink blush on pale cheeks made her look more like Bozo than Garbo. Even her curly red hair was dirty.

More gin. Definitely. But not yet.

I felt the familiar ambivalent emotions Carly always inspired. She was fiercely independent, but perpetually getting into some mess that I had to get her out of. I loved her, of course; she was the only sister I'd ever have. But I could strangle her sometimes. Gleefully.

Stubborn as an elephant, she couldn't be pushed. Believe me. I've tried.

While I waited for her to speak I flashed back to the first time we met. Gathered around the bassinet, watching. Instantly beloved. Tiny face, flashing blue eyes. Red ringlets framed porcelain skin. Mom cooed over Carly's little feet and perfect hands. Her brothers murmured in hushed wonder as they examined miniscule fingernails, perfect eyelashes. One of the boys, not quite ten and very clever, wanted to call her Curly, but his mother insisted on Carly, and his brother punched him in the arm whenever he refused to get it right.

No one noticed me, Wilhelmina, standing off to the side, already five foot six and still growing. Nothing about me was petite or cute, then or now. I was gawky and awkward. Even my earlobes were big.

The only things Carly and I had in common wereas red hair and double X chromosomes.

My relationship with Carly was born in that minute. Conflicting feelings of awe, jealousy, irritation—and protectiveness. I'ved always taken care of Carly and she'sd always resisted. She thought she could take care of herself. Experience proved otherwise.

I like to think we've both matured in 29 years, but maybe not.

She was all grown up now, but still 110 pounds and 5'2". Carly's style was anything but cute. Sporting brightly polished artificial claws and perfect makeup, she was a proud glamour hound. "It's better to look good than to be good" is her personal creed.

Maybe she can't be good, or maybe she just doesn't try. Either way, the result is the same: whirling dervish in a small, perfect package.

I sighed loudly. Stopped playing with my watery gin and pushed it aside. As much as drinking would have helped, I'd need to keep all my wits about me to deal with Carly, and I was now dangerously short of time.

Too soon, my husband expected more than six hundred guests to attend an AIDS research benefit here in his restaurant. It's no secret that I hate these shindigs. Not my thing. At all. George might actually have been holding me captive when he extracted my promise to act as hostess. A thousand dollars a plate. Movers and shakers and poseurs showing up to see and be seen at what they considered their finest. I was hot, sweaty, and still wearing my work clothes.

"OkayK, the suspense is killing me. I don't know what it is you have on your mind, but it can't be that bad." Realizing I was sticking my neck out, I asked, "What's up?"

As if she'd been waiting for me to ask, Carly said, "It's worse than anything you can imagine."

She said it quietly, with none of her usual bravado.

"Hey, come on. I have quite an imagination," I joked. "Just because you haven't talked to me in a while doesn't mean I don't care about you."

The truth was that I cared too much. Always had. Never figured out how to toughen up my heart where Carly was concerned.

She smiled a little, sheepishly; seemed to take the edge off.

Carly slumped back in her chair and looked at the water. There were a couple of late afternoon sunfish sailors out, racing back and forth from Davis Islands to a spot 100 yards off the edge of our island, Plant Key.

About a year or two later, or at least it seemed that long as I imagined myself forced to greet senators and celebrities wearing nothing but my underwear, Carly finally started to talk. I resisted the urge to cheer.

"Did you see NewsChannel 8eight this morning?"

She picked up her white wine, took a sip, put it down, picked up the blue paper cocktail napkin, concentratinged hard while she folded it into a fan. She never looked directly at me.

I wondered if my deodorant would hold on another eight hours. Maybe I could skip my bath?

"Did you see the news story on the drowning victim?" She finally asked, in a small voice.

Drowning victim? Are you kidding me?

Maybe he drowned, but I hoped he was dead before he went into the water.

Frank Bennett had the report. He'd said pieces of a body were pulled out of Tampa Bay before dawn. The largest portion, the part the sharks hadn't eaten, was found banging against the pilings of the Sunshine Skyway Bridge in Pinellas County. Hands and feet were bound together by clothesline and tied to heavy cement slabs. Face unrecognizable.

By now, she had shredded the cocktail napkin into tiny blue pieces and dropped them all over the deck. I remember thinking foolishly that she'd need collagen on those frown lines next week if she didn't relax.

I nodded encouragement to keep the words flowing because I couldn't fathom Carly involved in murder. The possibility didn't surface.

"Let me ask you a hypothetical question," Carly said.

That very second, I knew. She wasn't looking for sisterly advice. Not the usual boyfriend trouble or help with credit card bills. Carly was involved in something much, much worse. My body shivered with visceral certainty even before my brain acknowledged.

I should have stopped her right there. Should have cloaked us both with appropriate protections. I knew what to do. I knew how to do it.

But did I even try to dodge the bullet I saw coming straight at me? No. So how much smarter had all those Detroit homicides made me?