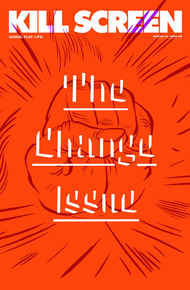 2012 was a big year, an election year, in fact. So we felt like exploring a big transitional topic like change made a lot of sense. It was also the first issue with structured chapters which was, well, a big change for us. – Kill Screen Magazine