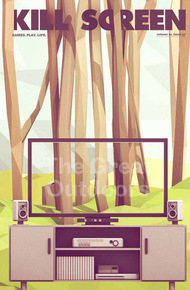 In this issue, we'll explore how our on-screen lives are affecting our off-screen ones. Can games open a door to the larger outside world? We sure hope so.

We’ll jump from the eagle-hunting steppes of Kazakhstan to the handholds of Uncharted’s rock climbing faces to the playful (and nauseous) edges of outer space. We’ll talk to technical directors on the edge of digital verisimilitude, game designers channeling Thoreau’s Walden, and in-game photographers doing their best to capture the beauty and mystery of virtual worlds.

Plus! Breaking into Chernobyl with Russian videogame kids. Going ape with tablet games for orangutans. Hunting for Bigfoot in San Andreas. Looking for Xbox after the apocalypse. It's all here.

Games are often critiqued as anti-outdoors specifically because they often ask you to stay in front of a screen for long periods of time. But that doesn't mean virtual spaces can't affect our thoughts of outdoor ones. This was yet another issue where we were trying to overturn popular conventions about games. – Kill Screen Magazine

From the article The Life He Imagined by Richard Morgan

It is certainly one of the weirder niches in videogames: adaptations of classic American literature. Last year, Charlie Hoey, a programmer in San Francisco, released the 4-level, 8-bit NES-style Doki Doki Toshokan: Gatsby no Monogatari (Exciting Library: The Story of Gatsby), a Mario-style version of F. Scott Fitzgerald’s The Great Gatsby. Last year, the National Endowment for the Arts gave $40,000 to Tracy Fullerton, a professor at the University of Southern California, to help her develop Walden, a videogame version of Henry David Thoreau’s 1854 transcendentalist bible.

Fullerton, now the director of USC’s Electronic Arts Game Innovation Lab, was inspired 10 years ago while visiting Walden Pond, an hour outside of Boston, and rereading the book. After working on a few experimental games, she posted a preview of a conceptual Walden videogame to YouTube in October, 2007, about a year after a Second Life message board started wondering what had happened to its beloved, once-bucolic multiplayer online simulation of Walden (over time, it had become yet another shoot-em-up gladiatorial arena, a hellscape for the Halo masses). Fullerton’s newest preview, posted to YouTube in August 2011, shows the seasons changing and an avatar walking around the woods, collecting berries and such.

It’s not wholly unlike, say, The Sims 2: Castaway—or any of the Sims expansive openended, pee-and-sleep-and-eat franchises—but it’s also very reminiscent of The Oregon Trail and Animal Crossing. Fullerton said all of these games were strong influences. But the goal of Walden, its gameplay, is what gamers have done any time they’ve been presented with a massive environment. Remember all that walking around and just plain taking-in-the-scenery you did with the Ocarina of Time or your first Grand Theft Auto?

"Like most kids," Fullerton recalled of the book Walden, "I remembered the war of the ants for a long time after I first read the book. That stood out to me because, of course, we’ve all watched ant colonies do their work with fascination. And here was an epic discussion of just such an activity. I also remember how much joy Thoreau had in walking the woods—when he talks about being the self-appointed inspector of snow-storms and rain-storms—which again, is something that kids can relate to, wanting to go outside the minute it rained or started to snow and check it out. I’d like to capture some of that joy in the game, that sense of adventure in the ordinary.”

But the twist here is that the more you invest in exploring the details of the simulated Walden world, the more immersed you let yourself become, the richer and more lush the actual world will seem.